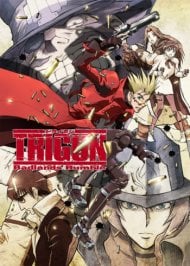 Finding himself yet again in the wrong place at the wrong time, Vash the Stampede is caught in the middle of a bank robbery by the notorious robber Gasback. However, when things take a turn for the worst and the robber's comrades turn on him, Vash saves Gasback's life and both Gasback and his traitorous partners escape. Twenty years later, Gasback is rumored to be planning something big. Bounty hunters from all over the world are gathering in Macca City, the predicted target, to try their luck at his $$300 million bounty. But what business does Vash have in Macca City, and who is the mysterious girl that he keeps following around? 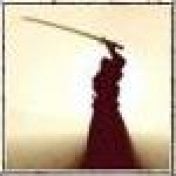 Trigun was like a vacation or holiday, that you never weant to end. Trigun: Badlands Rumble is like the first day of school, when you have to go to that "ugly, old" building full of memories from summer. You have to sit down and start listening to some old fart, who pretends to speak about something interesting. But suddenly you realize that you are naked and everybody is looking at you. At that moment you wake up in cold sweat and out of breath. You look at you calendar just to find out you have still some days left. Just to be clear, and without any comparsions, Trigun movie was just awesome. It's expansion of amazing universum and one of the top anime you'll ever see. And in BluRay! Vash is the same silly-willy kind of plant we used to love, Wolfwood is still way cooler than many of "sidekicks" we are usually served and pair of insurance agents Meryl and Milly is playing just second violin (as we say in Czech Republic, basically they are minor characters here :D), what more we could wish for. Oh I almost forgot. There's one new smoking hot, that kind you don't even think of inviting to prom night (and with little exaggeration, almost only woman in town) and apparently man-alergic girl, Amelia-chwaaan! Of course that Vash can't leave her alone and their chemistry is great. If you are Gunsmoke virgin you can watch this movie too. It has not so many references to anime because characters are clearly introduced and their relationships are not of much importance. You can just go with premise, that they know each other and that's all you need. For that matter, Trigun: Badlands Rumble is great and there's no way around it and you can certainly watch it aside from the series, but as stand alone film you won't have the same feeling, because you won't come back to something you like and for some is always good to know some background for characters and universum. As clearly as I can say it, you won't get it here. On one side it's good, because it means that some of you will watch original series, but on the other side for some it can be a drag down. FINAL OVERVIEW: Basic story isn't really something. It's story about two revenge and how it can mix up when Vash is on the stage. It's more about atmosphere and how the story is told than the story itself. In the characters section I valued them based on series, I admit it. As I try to be objective I can't substract myself from original Trigun. You may not found them as deep or characterized as you want to. My only advise is go and wacth the original. Animation is on top level here, details won't change characters or background. Fights are fluent and nice to watch. Sound and music are as western should have. So, if you like space cowboys and scifi western in general, this is the place. Just preapre good horse, get yourselves pair of guns, put some of your money in the boots and keep change for water machine in desert and you should be fine. 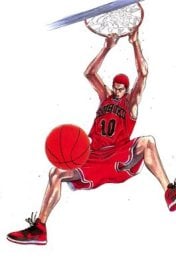 Story - If your a Trigun fan, than you will not be dissapointed with this wonderful addition to the series. It lies somewhere towards the end in the series chrnologically (if your wondering). The story is interesting and at no point did it lose my attention. Granted, it really does feel like a really long episode at times, but a really good one that captures the atmosphere that Trigun had back in its day. My only qualms with is that is felt some characters got more spotlight than others; a small problem (and maybe im just being selfish and wanted the movie to keep goin...) Also, you need to have watched some of the episodes to really get a feel for who these characters are and some of the plot to get the full effect. Its a 9.3 out of 10 Animation - Well if youve seen some of Madhouse's most recent work, than youll know what calibur of work they put up. I have nothing to say here except its a 10 out of 10 Sound - The sound effects of the bullets, the destruction from the stampede, the epic music... and the great seiyu to accompany the characters, same as the originals. I cant wait to hear the english dub too. I'm betting itll sound just as epic. 9 out of 10 Characters - Of course Vash and the insurance girls are back, and we delve more into Vash's past...However, the movie's real stars are Gasbeck and Amelia in terms of great characterization and as a driving force for the plot. Although, the best moments come from Wolfwood and Vash when together. Overall, Trigun's characters are awesome as always. 9.5 out of 10Overall: It gonna be a 9.5 out of 10

Trigun is a Japanese manga series written and illustrated by Yasuhiro Nightow (Gungrave, Kekkai Sensen). The manga was serialized in ‘Tokuma Shoten's Shounen Captain’ in 1995, with three collected volumes when the magazine was discontinued in 1997. The series continued in ‘Shounen Gahosha's Young King Ours’ magazine, under the title ‘Trigun Maximum’, where it remained until finishing in 2008. Both manga were adapted into an anime television series in 1998. Madhouse animated the TV series, which aired on TV Tokyo between April 1, 1998 and September 30, 1998, totaling 26 episodes. An animated film called ‘Trigun: Badlands Rumble’ was released in April 2010.Vash the Stampede, a gunfighter with a giant bounty on his head, always wearing his favorite red-colored trench coat, is back. Scary as it may sound, he is actually a very nice guy that values the life a lot. Twenty years ago, Vash saves Gasback, who is the world’s №1 wanted criminal. Almost. However, twenty years later he finds himself in a town, where, for reason, many bounty hunters are gathered. Among them, there is also a young lady, who wants to kill Gasback really badly. Why does Vash try to save Gasback’s life?Visually speaking, this is the best that Vash and his friends have ever looked onscreen. The animation is, of course, new, but what is interesting is that it is still similar to what it was back in 1998. The animator team paid attention to every detail starting with Vash’s coat and ending with bar brawls. What is more, the action scenes are just marvelous. Sound wise, both English and Japanese dubs are equally good; you are free to watch this movie in whatever language you wish. There are also many not only guitar tunes, but also some gentle tunes, when the dramatic side of the movie is shown.Character wise, the movie has some awesome characters. There are three main characters and three supporting characters (who are manly Vash’s old friends). Gasback is the main antagonist of the movie. He has a 300 million bounty on his head for robberies, but he also follows his own code of conduct for a perfect robbery. Vash is the second protagonist of the movie. For those who still have not seen the original TV series, I am just going to say that he is a very nice guy that values the life of people a lot. The last main character of the movie is Amelia Ann McFly. She is an extremely beautiful young lady that can fight for her own hand. Not much is known about her, but she, for some reason, wants to kill Gasback. There are also three supporting characters, including: Stryfe Meryl, Thompson Milly and Wolfwood Nicholas D, whom you should know already.All in all, Trigun, just like Gintama, knows how to balance different genres. It knows how to make the viewer laugh, it knows when to show drama, and it knows when to show action. Of course, it might be difficult for you to understand what this movie is about, so it is highly recommended to watch the original TV series first. However, if you are one of these ‘picky about old animation viewers’, you are free to skip the TV series; you will still understand the main idea of the movie. Enough with that. I give this movie a 9/10 for being extremely entertaining. A great thanks to the author for this wonderful ‘goodbye’ for all the fans of Trigun. 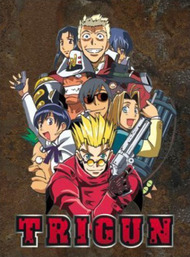 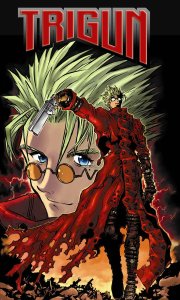 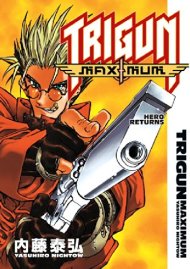 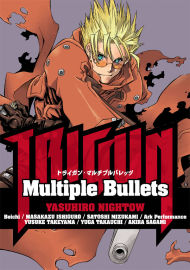