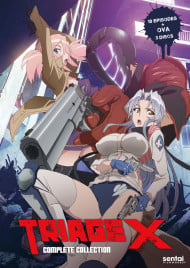 Mochizuki General Hospital boasts some of the most well-trained (and well-endowed) nurses in town. But though these ladies spend much of their day battling sickness, their after-hours are spent fighting a very different sort of disease…Under the leadership of the hospital chairman, a handful of staff members and local teenagers form a group of mercenary assassins, targeting the “cancers” of society and excising those individuals before their wickedness spreads.

Story This anime is about a group of people, where all of them "died" which propably means they were really close to death but got revived, that is working as a team of asassins. They are after the big shots of organized crime, those people that get away with everything, because they have influantial friends or other stuff like that. Their organization, Black Label, kills those people, telling them they are like a tumor to society. After this is made clear, Black Label has to oppose a group, which is later called Syringe, which tries to get a new drug into Japan, which seems to make the user more aggressiv amon other things. You never learn what happened to that drug or to Syringe, since the series just stops in between this storyline. I didn't even fully understand the difference between D99 and Platinum Lily, if there is any. Those are both names of drugs, but I think D99 could be the antidote to Platinum Lily. The Plot as is is totally unstructured, or I just don't understand it as it was meant. Sometimes we see the main character, Arashi MIKAMI, with his friend from school, but only three times I think. Otherwise she is totally irrelevant to the plot. Then we have another thing where two idols are going with Oriha NASHIDA, who is an idol herself, to rescue other idols. That is the only time those two side-characters are around. We always get the teaser for some interesting character-development, but then again it is destroyed or left behind. There were many good built fighting scenes, though, but I think they took much too much time from a ten episode long series for that fighting stuff to really get things done on the other parts. There are so many loose ends in there because they tried to tell me several plots, while the time besides the fighting wasn't even enough for one plot. Animation  My favorite part of this series. And no, my high rating for animation is not because there are many busty women around and you get really many panty-shots and nude women (at least I assume, since I was watching the censored version). No, I think there were many good fighting scenes in there. They were thought through, they were drawn good, you didn't see too much obvious rendering, it was just well done in that aspect. Sadly I for myself think a decent animation isn't nearly enough to get over a lousy story. Sound The sound was okay. I don't remember anything spectacularly good or bad. The few songs that were strewn in were okay, too, but there was not enough music in it for my taste. Characters Now the hard part. The characters were awful! I can't remember any character development. Anything important seems to have happened before the series started and in fact I didn't care enough about any character to being eager to know why he or she ended there. Not only was there no development of the characters at all, I had the feeling it was intentional. Every time when there happened something, that could have given any development, it stopped to be important when it was done, save for the kissing between two of the characters almost at the end of the series. There were so many chances to evolve the characters, which were written in by the same people that rejected them afterwards. It was a feeling of "let me have my cake and eat it, too". They wanted to hint development of the characters and then they didn't get it through. Save for Sayo Hitsugi that is, she had at least a little development at the end of the series, she got rid of her mask. But even there was so much potential in there, you propably could have filled those ten episodes alone with her backstory. Which brings the most annoying part of this whole thing. It felt too big. If you look on the character page, at the moment it has eleven main or secondary characters, and every one of them, plus at least three of the side characters seem to have their own backstory that has to be told. But there is no place in this series. I assume, without looking it up, that there is a manga or a novel somewhere, where this originated from. Then I would understand what happened there, not that that would make it any better. Overal The storytellers just wanted to tell too much of a story in too few episodes, propably using not enough money to do so, too. That lead to a story I don't really get, that is open in every way possible, I don't think there is even one closed storyline here. I had to fight to get through, too, asking myself what this whole thing was about at all. It wasn't entertaining, closer to frustrating. For me, really bad show!

Traige X really wasn't that bad once you face the facts that this series to anyway is a run of the mill series. I would put it up there with it being as run of the mill Akame ga Kill, I just wonder with it having simliar overal themes and better characters on paper why people love Akame ga Kill yet hate this series. StoryThe story is simple a group of characters who are brought back to life become assassins who are to cleans the world of those who are destorying lives. Much like Akame ga Kill, however Triage X is more action based right off the bat thats one thing this series did storywise, action and not trying to really pull for emotions. The story really loses its focus a lot of times with the backstory of the characters taking way too much time. There are times the backstories of some are good but I would have liked the story to have more depth to it. I liked the set up of another group being able to go toe to toe with Black Label which, again reference to Akame ga Kill, it did better. They relay on their own skills and not weapons/relics to fight which could be why if you asked me Triage X or Akame ga Kill I would say Triage X. The story does have a ton of over the line ecchi moments of boob squeezes, girls moaning, and more spit exchange to make Mysterious Girlfriend X say thats way too much. I could have gone without the censorship in the series though. The censorship made me wonder if they know their going to be censored why spend time with the nudity and ecchi? I guess they did it to try and boost sales with the BD comes out. AnimationThis is really the only thing that the series did great. The animation is crisp, lots of vivid colors, and we have a lot of detail. The detail is mostly on the motorcycles and the look of the characters from within their helmets. You could say that I started the series to get an idea on what its about but stayed for the animation which thankfully this was on a 10 episode series.  SoundThe sound in terms of music was great, gunshots take it or leave it most of the time. It was basic and I would have liked to get better sounds or more realistic instead of sticking to stock sounds. I'm sure the gunshots in this series sound just like the gunshots in Gunslinger Girl. I did enjoy the OP and ED which is rare for me to like both and say that they fit the feel of the series. I don't think a pop OP would really fit a series that is focused on action. CharactersI liked them to a certain extent, however I gave this section a 1 because most of them don't add to the story. I like that this series didn't have pretty much a small army to make up Black Label and really had a touch of every skill. You have people great with guns, skilled with a sword, on thats pretty much a bersker class, and one great with bombs. Sounds like a complete class where they could fight together or use their own skill to hold their own. I would have rated it higher if the characters had more to do than just fight. I also would have liked to get all their backstories to understand more about them because we only hear about two characters in detail and I would have liked Ryu to do more as well in the series. Ryu to me was like a nat, he showed up and talked then he's gone. I know who he is but come on give us detail on whats going on interact and add to the story don't just be a pop in. I would liked him more if he added to the series like Nanami from Brynhildr in the Darkness. She was a pop in character but she was able to add to the story, he was as useless as Orion in Amnesia. OverallTriage X really amounted to being about nothing and as the final scenes explaind nothing was resolved. I think this was a 10 episode series that could have been better if the series seemed to make progress. I do suspect they are going to make a second season or have a few OVAs which now I'm going to have to watch because the ending left too many things open. I only thank the studio for making it 10 and not 14 or 26. I would have to get out and cause chaos and hope I get a black label so I could be put out of my misery!

====================== UPDATE: the sound effects must have lost their budget because a woman collapsing on the floor doesn't sound like a wet towle dropped on the floor.I FINISHED THE SHOW AND THE SHOW FINISHED ME! THIS IS A HORRIBLE AFFRONT TO ALL STORYTELLERS EVERYWHERE! NOTHING COMPARES! NOTHING! ======================MY friend got into "anime roulette" on the forums and got this anime.He's a pretty good friend, so I promissed I'd help him get through it. He already owed me a lot for the fact that I was doing this, after watching only three episodes he owes me a whole lot more. I don't understand guys who watch this stuff for entertainment, it's not even funny in an ironic sense anymore. Help me, please, someone, help me. 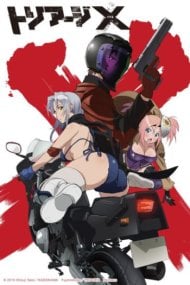 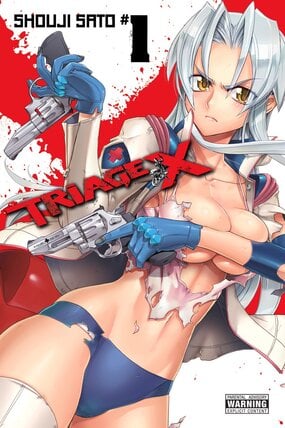