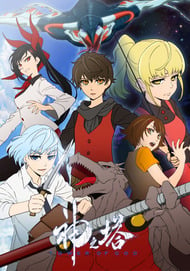 The soundtrack is amazing, love it.  The story is really good, haven't seen one like this in a while. Pro Tip: Don't read the comments when you're watching this, under any circumstance. People are pathetic and terrible lmao. The 1 season ends in around chapter 74 of the web novel.

After watching the Tower of God, I still don't understand what it's about and what the heck is the Tower supposed to be. While most of the characters have potential and are somewhat interesting. Something which cannot be said about the blank protagonist, who is the chosen one. Why and what for that hasn't been properly established yet. I can only speculate. Among his hidden super powers is luck. Good luck to make any meaningful non-comical story with that. The point is no matter how your characters seem intriguing if you don’t establish story and world for them, they are going to just hang in the air. Where the Tower of God is lacking most is the world building. It does not establish proper context for the story veiling itself in false sense of mystery. We have some scheming factions, organizational structures, races, series of haphazardly selected environments and tests … and Yes, the Tower itself. How does the Tower fits into this world? What role plays Jahad king in context to this world? Are there other “kings”? How about Jahad princesses? Even the whole deal with irregulars has not been explained properly. Yes, you may read the source and wiki, but then what is the point to making anime. It’s a defect, if anime fails to deliver without depending on external info even once. More so if it’s multiple times. The show tries to imitate Hunter x Hunter, but falls very short in every regard. Hunter x Hunter had a storyline, proper world building, meaningful goals established. In the Tower of God initial goal of main protagonist … how to put it without spoilers … does some story-line stunt, but in this stunt it’s completely crippled forever. So, now what to do? Whoever made this did mess up the story line in attempt to be original. It’s like people who can’t cook start by making something original and mixing things together. Usually things, which don’t go really well together to begin with. Adding insult to the injury or salt to an open wound the last episode pushes the story over a cliff. Making effectively any further storylines pointless as far as the main protagonist is concerned. What is goal of Khun the boy, who got kicked out of clan or wherever, who knows. I don’t know. Antagonists if one can speak of them in such term are not that all impressive either. In fact, there is just one truly bad guy and one interesting monster. Others are either kind of confused tragic characters, trolls or tacitly support the main protagonist. In the end victory is assured by plot convenience. The crocodile-man character is primarily for the comic relief. He is basically playing role of Leorio. The thing he has with eating chocolate is overused to the death. In a story, where a side character, who sleeps through most of the episodes and has more charisma than main protagonist, greatness is something you won’t find. It makes more sense to rewatch Hunter x Hunter. Overall impression is subpar. The only thing you are going to care about is which Jahad princess is the best.