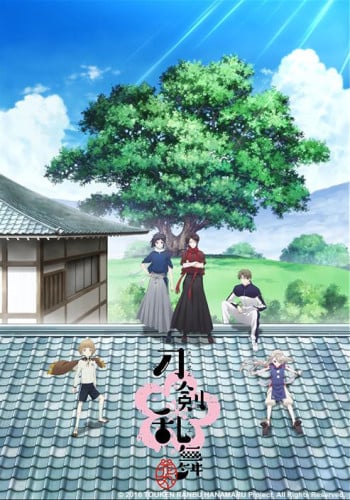 After the three episode test:

Cuties and bishies? Check... check check check check check and more checks constantly. And this is the problem. The little story you get seems interesting enough, and I was really looking forward to getting to know some of the characters more in depth. The cast is so huge and unwieldy that you barely start getting an attachment to the character you're seeing on screen before you're whisked away to briefly meet another member of the ever expanding pantheon.

If all you're looking for is some light hearted (and occasionally slightly deeper) eye candy, then this will be your jam. If that's not your thing, take you toast elsewhere.

First Impressions of the show (after ep 2).

I could definately tell it was based off a game before I even read the synopsis. It's so much eye candy and cute/attractive boy characters. I mean, I like that but also get bored quick when it's cliche fluff.

The action is super cheesy, why do the 'bad' guys that are trying to mess up the future look like crazy youkai???

I like the 2 focused on MC ish characters that were Okita Souji's sword. But I also wonder how much plot and character development we're going to see around them...

This is because this show has (as this kind of game would imply) WAY WAY TOO MANY CHARACTERS. They added two more on the second episode and I already couldn't keep them all straight! I realized they are trying to cater to fans of the game by not leaving any out? But for any other viewer it's just way too many characters to work in without having a crap show where everyone gets relatively little screen time and remains a card board cut out. Like even if their personalities aren't going to get much to begin with, at least viewers have a chance at getting attached to characters if one is focused on during the show...

Honestly not sure if that's gonna happen, but it seems like they picked a handful to give slightly more screen time than the others...maybe.

Anyways I'm all for some cutesy eye candy right now, but other than interesting character designs there's not much future prospect for the value of this show.

Who knows, maybe they'll make an attempt at giving a few characters more backstories/drama/a crisis, which would make this whole show a little better.

After Watching the Series:

The answer is no. After introducing buckloads of charaters to make sure they get through them all, there is a bit of time for the quote "main character" to overcome a problem. Overall a bunch of eye candy fighting weird monsters with ease and with no worry that any of them will ever die with many episodes mainly for introducing more charaters which seems like fillers since they never stick to one or even a few charaters.

Yes, some of the charaters are cute. Some of them I wouldnt mind seeing more of for funsies, but that's not what happens because too many other charaters are being introduced at the same time.

If you want slice of life, a bit of cheesy action, and some pretty effiminate boys to look at, this can eat some of your time up.

Based on a online game where a series of historical legendary swords are given human form to fight against the evil who are  trying to change the past events , i.e.shinsengumi and nobunaga battles . We see these swords eye candy live there days in a citadel...  it is humorous the watch. I love each characters characteristics and the bonds with their fellow comrades ... learn a bit about history at the same time 😂 ...