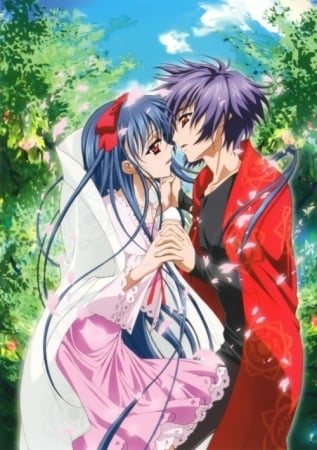 Two thousand years ago, the stone sword known as Sekiken was involved in a tragedy that plunged the land of Kamitsumihara into chaos. Now, in the present, all the elements needed to perform a ritual to cleanse the land and end the endless cycle of reincarnation are available. Kamiazuka Touka, current holder of the Sekiken, meets Kawakabe Momoka, a young girl and reincarnate of the tragedy. During their brief time together, they must uncover the truth behind past events, try to lead a normal life, and learn what it’s like to be human.

Note: this is from a video review, see https://www.youtube.com/watch?v=tcv3UQh7FwgIt is playful. What it is meanders between comedy, fantasy, and romance, often all at once. It is not one aspect or another; some episodes consist almost entirely of one theme, but later combine them with not necessarily equal proportions. What it does seem to have as an underlying element is Buddhism, and this sense that the present is what matters, as in the anime when the past is thought of destructive fantasies come into fruition, and if it's the future doubt is thrown in, as in real life. Other than that, each episode is narratively distinct, although they all have a bedrock of characters that appear in nearly every one. It is, essentially, an ensemble cast, but some are more visible due to their specific function in the world of Kamitsumihara.It doesn't shy away from much, which makes it fickle as a genre. Some fantasy may be comedic and serious at other times, but not many also attempt to present each story in its own specific frame, whether a theatre (and as such doubt its authenticity, in thinking the viewer is watching the watchers, but then viewers are still doing such an action outside of such a frame). It can have a meta-narrative, as per the implication that a character is also the writer, but still that somehow in-universe personalities are aware of subtitling. The latter is comedic, but the former is used more often in more serious narratives that serve as a commentary to what a 'flow' is, and how a subconsciousness may take over. The anime itself isn't told at all as simply as most other stories, and yet guises itself in typical shounen tropes, which may be distracting as to what causes this and that. Visually it synergizes with the script.While anime like Katekyo may have stereotypical props that tell a fairly straightforward story (that can still narrate it with vigour, although more comedic), Gettan uses items like swords in a similar, but symbolic fashion. Most events are also almost metaphorical, like when the sword first appeared. This is what separates it from most shounen anime, although the comedic episodes have more similarity, despite usually ending with a supernatural twist. This is what makes this story more unique than most other anime with similar themes, along with the variable of sexuality (done in a subtle way), which isn't by itself positive or negative; it was like Inuyasha (with shrines and myths) if that wasn't so single-minded about Naraku. In far fewer episodes Gettan tries to be even more varied, and this is also evident in its music which can range from jazz to (what sounds like) harps.Now, with regards to the average viewer's perception (as indicated by the decimals on various sites)... how exactly does a mind work? So, as long as one assumes Moonlight Lady 1 is seen by the same people as 2 (Gettan)... how? Was the prequel rated solely on how titillated one felt? Narrative and anything non-repetitive be damned? One is hentai, the other is a subtle narrative about meta-universes and existential possibilities... oh, but one can't possibly expect so much from the average viewer, can one? It's a world where Erica Friedman apparently complained it's not yuri enough. I mean, sure, it's unbelievable it even has such a prequel, so perhaps it's attracted the wrong sort of people, unable to appreciate both Yami and this.An impressive analysis of this series was done in the book titled 'Anime and the Visual Novel: Narrative Structure, Design and Play at the Crossroads of Animation and Computer Games' by Dani Cavallaro, page 55 - after the writing about Yami. It is certainly a deep narrative that merits delving into. 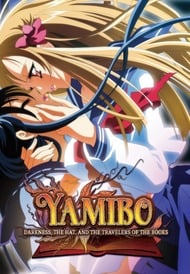 Yamibo: Darkness, The Hat and the Travelers of the Books