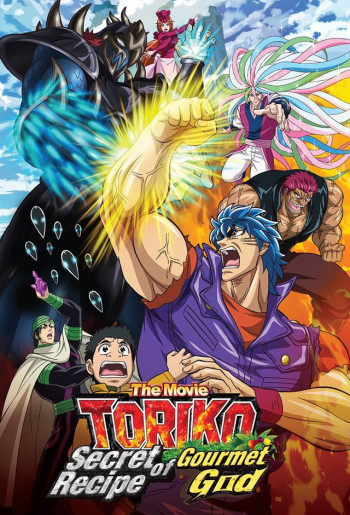 If you're looking for anime similar to Toriko Movie: Secret Recipe of Gourmet God!, you might like these titles.

After being blown off course to an unknown part of the sea, Sanji breaks some devastating news to Luffy: they’ve run out of food! Luckily, it seems salvation is at hand when the Straw Hats land on an uninhabited island where meat literally grows on trees. However, the isle isn't completely deserted - it's inhabited by the Gourmet Hunter, Toriko, and through their love of meat Luffy and the manly food devotee quickly become firm friends. After munching their way through a herd of Grilled Pork, the Straw Hats think of gathering supplies for their voyage and Toriko has the perfect solution: together they will hunt down the legendary Hungri-la bird. But when Nami and Komatsu are kidnapped by Cocoalas, all thoughts of food are gone... well, almost.