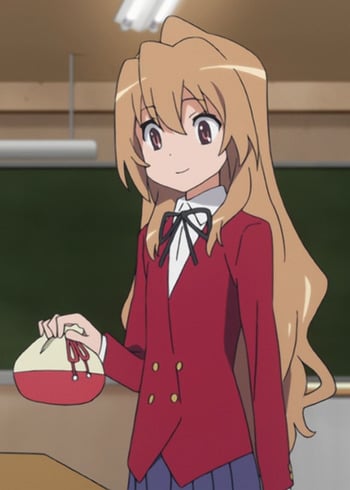 Toradora Special AKA Episode 26 is an extra episode for that romantic comedy anime based upon a novel. This OVA, is literally original video animation, the novel ended where episode 26 did. One would expect something post-narrative for this, but this is just filler, which is a big disappointment. Forget the romance, this is just a little comedy and plenty of cooking. Such as shame, such wasted potential here.

It goes back to the first intro/outro set, suggesting the events take place before the Christmas party in the main series. Otherwise, check here for the deets.

As per before, click the link and read up on the characters, nothing has changed after all. Ryuuji seems to be very competitive when it comes to cooking, and Yuusaku seems to get amazing lunches made by his grandmother.

When Yuusaku comes in with a feast his grandmother made, Ryuuji feels his cooking skills are under threat. He wants too cook better so he goes overboard about it. That's it. Just filler set before the Christmas party. Very disappointing considering how well the main series concluded. It should have been a story of how things went after school, perhaps showing the two characters actually getting married. As mentioned in the intro, none of this was in the novels, this is addition by the creators of the anime, who were given free reign.

I guess one can use this to realise that the main anime was good because of the original material it was based upon. This has really got me thinking about the anime industry and how tastes differ. I really don't see how this is too enjoyable, this seems to push the overall series towards the slice-of-life side of things. It doesn't have the drama and romance that the main series is known for. Well then was it funny? It wasn't to me. Perhaps this would be recommended for the died hard fans of Toradora, those who don't mind not having any more juicy plot. As for the rest of us, it depends on your sense of humour and the mood. Toradora wasn't a story to chill out and relax with (for me at least), since ist was so serious and full of drama. If it were a true slice of life, this extra episode might have been a bit more enjoyable, buy alas I failed to see the point in this.

Family-friendliness Rating: 1/5 I don't remember anything that might make this unsuitable to watch (lower is better)

Ahhhhh, Toradora! One of the animes that really made an impact on me, and after two years they released an OVA! You may be expecting some after story where Taiga could be pregnant (kinda hard for me to imagine though XD), she and Ryuuji are living in an apartment together or maybe even have kids! But much disappointment to a lot of people, it ain't. It's just another story of their everyday lives which could fit in perfectly if they placed this episode in the series. Some people could've gotten angry even. But I believe that this is a smart decision, to release a normal story than an after story one. There is that risk of instead of loving Toradora! more, the OVA could've shown an ending that we would not want because I believe the ending in the anime is already perfect as it is. So they released an OVA on a normal school story of their lives but still very enjoyable nonetheless.

Story: 9
So the story is about Ryuuji feeling at loss because Yuusaku's grandmother is beating him when it comes to making ben-tos. And so he tries to make better and better ben-tos but forgetting on why do you make ben-tos in the first place and who you make for it.

The story is fairly simple but still funny and comical.

Art: 8~
I don't really see and improvement in the art but still a relief to see the same old Toradora! style. Oh and I gotta mention the Taiga moe scenes are just...... HNGGGGGGGGGGGG

Sound: 9~
Ahhhhh, I had goosebumps when I heard the OP and ED, brings back so much memories ^^ I was not sure but I think the ED had some added content.

Character: 7~
For some reason some characters didn't feel the way they're suppose to feel in the manga and anime. It really wasn't that noticeable but they still had a very similar feel and it was still fun and enjoyable to watch.

Enjoyment: 10~
I'm pretty sure whatever kind of story they show us here, I'm still going to enjoy it because of the feeling of nostalgia of seeing the characters once more in their comic acts. And it was also fun seeing Ryuuji and Taiga once more developing romance and Minori hiding her true feelings at a certain part :3

Overall: 9~
It was fun watching it is all I could say ^^ and it is obviously worth watching, especially to die-hard Toradora! fans :)

The special does what should have happened in the actual show: it drops the pretense of anything with meaning about the characters and story. Toradora! Special is filler for the original series, and therefore better than it. The animation is somewhat better too.

Don't get me wrong, this is still crap to view unless you enjoyed Toradora! in the first place. I didn't, so while better than the show, it still feels completely uninspired and generic. It was somewhat cute in a repetitive way, and got a nice and childish message (doing things for others makes it better!). Seriously though, it isn't worth it.

The irony is that because people who enjoyed the show want content, they will find Toradora! Special a let down, and people who didn't will see this as better but still rubbish. I don't know what they were thinking, but hey, I spent twenty minutes of my life watching this and it didn't make me regret my life choices. So it isn't all bad.

Im gonna miss the series so much