TONIKAWA: Over the Moon for You - Recommendations

Alt title: Tonikaku Kawaii: Fly me to the Moon 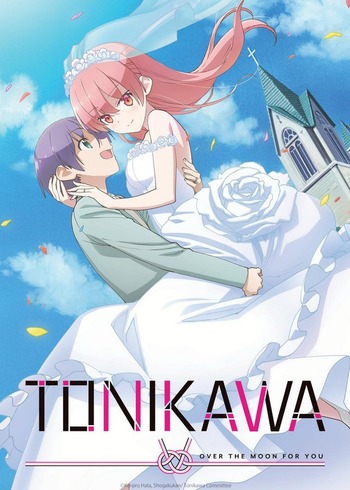 If you're looking for manga similar to TONIKAWA: Over the Moon for You, you might like these titles.

Yunoki has not only found himself in bed with a woman he doesn’t know, but she insists they’re already a couple?! The woman, Kotoka Hatsushima, is a charming, 23-year-old writer…who has one heck of a back fetish, and Yunoki fit the bill! And when she tells Yunoki that it was her hair that sealed the deal for him, he realizes the truth—she knows about his hair fetish, AND she’s absolutely right! He’s mortified, but Kotoka sees reason—if they float each others’ boats and already know about each other’s predilections…why not start a relationship? And Yunoki can’t argue with that…thus the back/hair (not to be confused with back hair!) hijinks ensue!

In order to help her father, Chiwa Takanashi agrees to an arranged marriage with the company president Hokuto Mamiya – a man she doesn’t know – at the request of Hokuto’s grandfather. Chiwa believes the arrangement isn’t binding, but her new partner seems to think otherwise. Can two strangers living together find their way to a happy marriage?!

Ikuma Saeki finally married his childhood friend and the girl of his dreams, Sumika. But while years of pining came easily to him, physical closeness does not…and he’s having trouble navigating the intimacy that comes with marriage. Sumika, too, is having trouble bridging the gap between friend and lover…what is this innocent couple to do but navigate it together, awkwardness and all! A new rom-com from the author of Ao-chan Can’t Study!

Juri Takasaka has been living together with her boyfriend co-worker for most of her working life, until one day he asks her to marry him. From then on, she commits to being a full-time housewife and tries to find all ways and means to make her husband go all lovey-dovey over him... only for him to beat her in her own game and make her flustered beyond all repair. It's a fun game of who can blush the most in this adorable romance comedy between newlyweds.

Yuuichi suddenly faces a divorce when his wife Hana says "It's impossible to raise a child with you", but he doesn't understand why she would say this. When Yuuichi wakes up after hitting his head and losing consciousness, he finds himself in the body of Hana near the start of the pregnancy - he will relive his past behaviours from the perspective of his wife.