Tonari no Seki-kun: The Master of Killing Time - Reviews 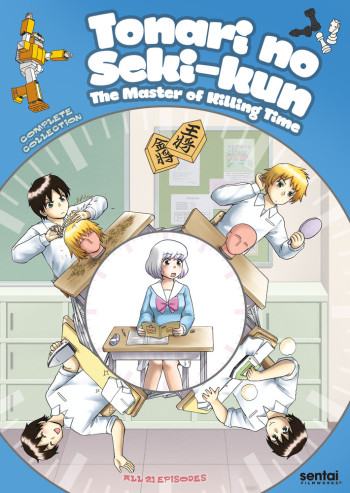 Yokoi Rumi is your typical high school girl, except, she has a rather large problem ... she finds herself seated next to a male classmate named Seki Toshinari ... and no her problem is not that of a romantic nature. Rumi tries to be a diligent student and pay attention in class but finds herself distracted by Seki who everyday brings something to play with during class ... things like an entire dramatic war being played out with shogi pieces, a golf course using the holes in their desks, paper sumo, a robot family, and even building a driving course for an RC car! No matter how hard she tries to ignore Seki-kun so that she can study, she always finds herself drawn into his game, and frequently ends up in trouble with her teachers. Can she get him to put his toys away and pay attention in class? Can she find the willpower to ignore Seki-kun? Watch to find out! xD Tonari no Seki-kun has episodes that average around 7 minutes long in length ... but don't let the length fool you into disregarding this anime as having no plot. Each episode consists of Seki bringing his newest distraction of the day while Rumi attempts to ignore what's going on next to her, failing every time as she finds herself drawn into what he's doing. The plot for each episode was wonderfully done and immensely entertaining! xD The characters basically consist of Rumi and Seki with the occasional appearance or comment from a classmate ... both of the main characters were wonderfully entertaining. It was a wonder to me how entertaining Seki was even though he never said a single word ... not in any of the 21 episodes! The animation was nice, nothing spectacular, mind you, but nicely done all the same. All in all I very much enjoyed this anime! Every episode brought a huge smile to my face and even the occasional laugh! I very much recommend it!

ART: No complaints really. Since nothing much is going on there isn't much for the art to do. Fortunately there is no need for it either so I'm fine with it.

SOUND: Again no complaints from me. The music did what it had to do but nothing stood out for me. Voice acting is good but I expect nothing less from anime.

CHARACTERS: Main character is Rumi. She is diligent student who tries her best to study but is constantly distracted by Seki, who sits next to her.

Seki is setting next to Rumi in class and spends most of his time goofing off. He keeps playing games and distracts Rumi in her studies.

STORY:  There is none. What I said in the character bit really is all there is to it.

RANT: There is very little for me to say here as there is no story. What there is .... is fine but don't expect a lot. Episodes are 4-5 minutes long and this is probably the perfect length as the gags don't overstay their welcome.

The gags themselves are sort of hit and miss for me. Some of them are based on Japanese board games. Board games that I know very little about. Not that this ultimately matters as he plays with his own rules but as I don't know the actual rules I keep feeling that I'm missing part of the joke.

There's many shows designed for children.   Nearly as numerous are the shows trying to sell back our memories of what we enjoyed as children.  But very, very, very few shows are created around what it's like to be a child.

Tonari no Seki-kun is a special series.  Each of its short episodes take place in a threadbare classroom setting where Rumi (the white-haired girl) is left anxiously watching Seki-kun goof off during class. Even with a mute titular character, Rumi's constant narration and worries over Seki-kun getting caught makes sure there's never dead-space in an episode. The sweetest parts tend to be when she buys into his day-dreams, only to get taken off-guard at the somewhat destructive plot-twists the adolscent boy comes up with.

There's no great conflict here, no story, no deeper meaning; it's just a humorous call back to simpler times.  Also, it's OP and ED are some of the best in recent memory and have wonderfully fitting animation to go with them.

In the end, it's one of the rare shows that deserve fulll marks simply for executing a simple concept well.

Tonari no Seki-kun is an adaptation of a manga with the same name. I have been reading this for awhile, I have already caught up with the manga already. This anime is very creative and fun anime. This anime is a 7-min and 21 episodes anime, the OVA and special will be releasing soon.

Story: 8
Tonari no Seki-kun is an anime revolves around Rumi Yokoi and her reaction and narration toward the person she sit next to Toshinari Seki or Seki-kun and his antics. His antics consists on something new every time, and it distracted Rumi from her note taking and sometimes she got in trouble because of his antics, and Seki-kun never gets in trouble. He hasn't been caught because both of them sit in way back, Seki-kun sit by the back corner by the window, and Rumi sit next to him. IDK how he have been caught it called anime logic's.

Animation: 8
The art is not perfect Kyoto Animation. But from manga to anime, it near perfect the manga and anime have similar art to it and I give a hand to the producer for that. The art for Seki-Kun activities pretty good, expectually the art book one.

Sound: 9
The main girl Rumi Yokoi voice actor sings the opening of the anime. She basically sing about her reaction toward Seki-kun antics. The opening is pretty good, and the voice actor for Rumi is good but Seki-kun didn't say anything...at...all, but he never say anything in the manga as well. The ending have a drum theme to it, impressive but it didn't get my attention unlike the opening.

Character: 10
There are two main character of the anime, Rumi Yokoi and Toshinari Seki. I like both of the main character and there designed, I got no beef with the character. They are fun to watch and I have no complaint about the minor character as well.

Overall: 9
The anime is good time to watch, it's only 7-min long and 21 episode plus the OVA and Special is coming out soon and I can't wait for that.

Tonari no Seki-kun is a perfect gem - 10 minutes of joy in every episode.  The only reason I didn't give it a 10/10 is because I wanted more and more episodes...

So why did I give the story only 6 out of 10? Because not a lot happens in this series.  The MCs are always depicted at school, either in their normal classroom or in a special class such as science, the audio-visual room, PE or art.  On one occasion we do see an evacuation drill, but that is as exciting as it gets.  No spoilers here though, as none of this is anything other than the background to the main focus of this anime, which is the characters of Yokoi, Seki, and how they react to what the other does.

The animation is simple and well executed, with clear lines and bright colours.  There is plenty of detail put into each of the items that Seki uses for his time-passing activities.

Where the anime really starts to shine is the soundtrack, and the work of the seiyuu, especially Shimomo Hiro who plays Seki.  Throughout the whole series he doesn't mention a word, yet he isn't silent - gasping, grunting, huming as required.  Most of the dialogue is actually Yokoi's inner monologue.  The interplay between this and the sounds Seki is making is masterfully handled. I can't comment on the quality of the dialogue writing in the original Japanese, as I don't speak it, but every time I hear "yamete" now I think of this anime and Yokoi saying this to Seki.  The OP and the ED are also wonderful, perfectly set to the mood and tempo of the anime.  The ED was actually recorded using the implements that Seki plays in the animation for it.  Check out the video of the real life version, starring the drummer who recorded this.

Becuase this is a short format series, don't expect a deep exploration of the character's psyches.  Viewers learn more about them in every episode though, and they are endearing.  I know I loved watching their reactions :)  The series also allows for a development of relationships between the two main characters, their classmates, and Yokoi and one particular set of Seki's props, that even have their own theme tune.  They are first introduced in the emergency drill episode I mentioned above.

By the end of the series Yokoi is very much aware of her fascination with Seki-kun and his pass times.  He has ackowledged her participation in these, sometimes, too - though on other occasions she is too stealthy...

So to sum up - every episode is worth watching, though some are more laugh out loud funny than others.

I dare you to dislike this series.