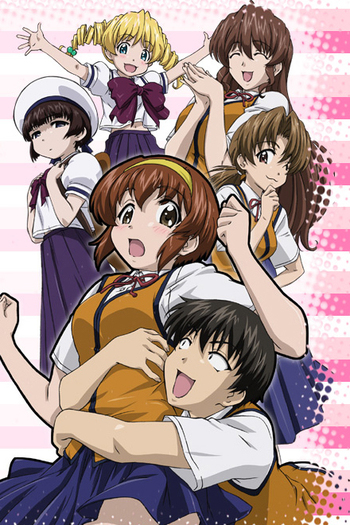 What ever you do stay away from this one people. I WARNED YOU!

For those who want to watch this for the ecchi you will be greatly disappointed. All you get is a perverted retard and a selfish bitch that beats the shit out of him because of her legs being humped.

Story: Well there is no story. Its more like episodic with a short story somewhere hidden away.

Animation: Not a lot of ecchi hardly any from what i seen. I think there all in the beginning though.

Characters: NO ONE LIKES TO SEE A "PERVERTED" RETARD THAT DOESNT GO AFTER MULTIPLE GIRLS INSTEAD OF ONE! A regular pervert that "scopes" other girls would be better AND NO ONE LIKES A STUPID SELFISH GIRL THAT CAN'T READ THE MOOD OF PEOPLE AROUND HER. If you do like those girls well they must be pretty damn hot.

My favourite character is the side characters because there not a total baka. Except Hatsune, but she knows when to stop and get serious.

This is the worst comedy/drama I have ever seen in my life. No one wants to see a guy trying to hump her legs then gets beat up for 13 eps straight.

I only watched this because of the synopsis. Reading it was better than watching it...

Plot: "When they were young, Kazuki and her older sister Hatsune had Yuuji and his little sister Marie as next door neighbors; and while Kazuki developed a crush Yuuji, he and his family moved away for ten years, much to her dismay. Now, the duo is finally returning, and Kazuki eagerly awaits his arrival; she still has a crush on him, and wants to finally confess her love to the handsome and debonair man that Kazuki has become – or has he? Unfortunately for Kazuki, Yuuji has “evolved” into a typical teenage pervert who can’t keep his hands off her. Family isn’t much help, as Hatsune helps Yuuji at every chance she can get, while Marie and her air gun are ready to lay down the law at a moment’s notice. With hormones raging and hands groping, will Kazuki retain her feelings for Yuuji?" (site synopsis)

Story: Not much to talk about here.Since this anime has as main tag "ecchi" we speak about comedic stuff and especialy Fan Service themes.Well the so called story is centered on a teenage girl named Kazuki.When she was a kid she used to play with her sister Hatsune and her neighbours Yuuji and his little sister Marie.When Kazuki started to develop deep emotional feelings towards Yuuji, he and his family moved away for about ten years.But one day she hears that they will return back and she was looking forward to meet again with Yuuji and see how the years changed him.Also she wanted to confess to him and to give him a letter that she initaialy wrote it when she was still a kid and Yuuji was about to leave.However things dont realy turn as Kazuki expected mainly because Yuuji turned into a huge perverted teenager (more like a damn funny dude).Also her family doesnt help her that much lol Hatsune helps Yuuji all the time and Marie with her gun is always ready to put Yuuji's desires to ease.We cant speak of a good story developemnt here, this anime is fully concentrated on ecchi/comedy aspect making it extremely funny and enjoyable, in other words Fan Service!

Animation: Related to animation there is nothing that caughts your atention in terms of animation.Nothing new in this anime.The production year was also in 2006 and we cant expect the quality of the animation to be as good as it nowadays.Anyway i realy liked the character design of Marie, Chihaya and Hatsune.Yuuji also lol only looking at his face you realize that he is a big pervert (how do i know? because im also a big one so i recognize my blood brothers easily LOL)

Sound: In terms of sound this anime doesnt exceed my expectation as well.The opening and ending song seem to fit in the anime but they are not quite likeable.The background sounds are around decent but i think there was room for more improvements.

Overall: Enjoyable, extremely funny, watchable (a must to watch for ecchi fans), and i guarantee that you will laugh at many scenes (imagine that i got stomach aches after the first four episodes because i laughed too much).Even though as most of ecchi animes this one also sucks in terms of story development and character development but if you want to look for a funny anime this might be a perfect strike.But as i said im a big fan of ecchi animes, i love Fan Service stuff (well placed and well thinked ones not random) and of course this anime gets a high mark from me in overall.

And some sexy ones for fans:

This one is my favourite ~FlyLeaf - There for you~

And a damn funny one with the song Avril Lavigne - Hot

5. After a recess of 10 years, Kazuki’s former neighbour and childhood crush Yuuji and his sister decide to move into their former house again. Kazuki, looking forward to see her former neighbours again, desperately wants to know what has become of her former lover boy, imagining him in her dreams as a handsome, benevolent and well-behaved young man. But she couldn’t have been more wrong! Throughout the years, Yuuji has become a perverted teenage boy that hits on chicks wearing as less clothing as possible. With her dreams being shattered to pieces, will they be able to make the best of their situation? That’s as much of a story you’ll get with Tonagura. It’s been clear from the start that this show shouldn’t be taken too seriously and was entirely made for the purpose of fan fiction. It’s lacking originality, being just one among a dozen other school animes containing Love between a dumbass and an idiot.

6. The entire series takes a total of 13 episodes. Basically what you get to see in all of these chapters, is Yuuji acting perverted towards Kazuki and Kazuki hitting him in the face for that. The pace of the Anime is alright, but that doesn’t at to the simplicity of the story and the lack of development it contains.

5. There are some cliffhangers in the show, I think I counted two episodes that didn’t completely end with all of their every-day lives’ problems being solved. Mainly the cliffhangers were pretty much the same: Yuuji and Kazuki fighting over dull things. There’s no place for more tension than that in Tonagura.

7. The story actually had a decent conclusion, but it was a simple one that still left in the dark what would become of our two lovebirds.

5. I wouldn’t watch this again. There’s plenty more great fish in the sea than this Anime. Even for the purpose of fan fiction, this show is hopelessly lagging behind compared to the more renowned fan fiction or ecchi Animes.

6. Nothing special here either. Yuuji is a hopeless guy trying to get the attention of Kazuki, while his female counterpart is like most girls in real life: never satisfied with the attention they’re getting. Her sister Hatsune gets more regards because of her huge breasts than because of her personality and Yuuji’s little sister has a whole arsenal of weaponry at home, with a gun disguised as a teddy bear as her organ point. Kazuki’s best friend Chihaya is that typical odd best friend who can see through everything and her teacher Kogorou Yuki is a strange old man with no real added value other than Yuuji being jealous about him.

6. Average. for an Anime that was supposed to be romantic, we don’t get to see deeper conversations than ‘I hate you’ or ‘Let’s break-up’.

7. The art style is pretty decent, which should be expected of a show with the purpose of being fan fiction. The characters are mostly cute, the art style adds towards the atmosphere of the show when it’s needed.

6. They’re either at school or at home, except for one of the last episodes where they are finally going out to have some fun. Kazuki spends a lot of time in the swimming pool as well, since she’s a pretty good swimmer. Too bad she has such an inferiority complex when it comes to swimming suits.

5. The intro song was alright, but the voice acting was plain annoying. As my Anime friend told me earlier on: I had to watch the Anime without sound because there was something wrong with the audio of my video files. I took that as a godsend.