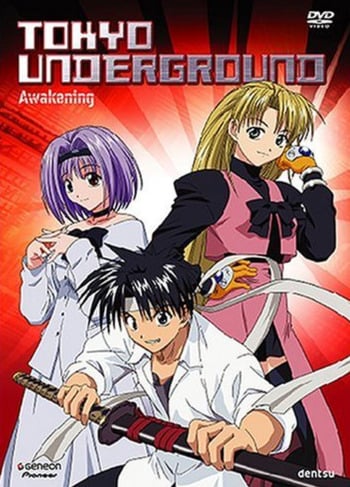 Spending a couple of years on my “want to watch” list, Tokyo Underground had been relegated to a growing list of forgotten titles. With a sudden (and misguided) urge to watch something dubbed whilst exercising, I dusted off the title and prepared for the unknown. Unfortunately, the show can be summarised as a promising premise that becomes wasted as the episodes drag by.

Starting out like so many shounen series, Rumina is introduced as a somewhat clueless, yet spunky highschool kid. Suffering tortuous training under the watchful eye of his martial art obsessed grandfather, he is quickly enforced as the leading male of the show and becomes the butt of a few cheap jokes to lighten the mood somewhat. To every pack leader, there must be a leading lady, and so enter Ruri and Chelsea – two very different females. Spurned to protect the delicate maiden, Ruri, Rumina trips into action aided by the feisty bodyguard Chelsea and the two somehow defeat numerous goons sent to bring the girls back to the underground world from whence they escaped.

Even after an uninspiring turn of events, the show retains a certain interest as the cast descend into the underworld and viewers are treated to some interesting and believable theories about humans living sub-terra. With large gantries providing light for both people and crops, and an entire civilisation relying on each other for survival, the premise is soon dropped by the wayside to make way for some tedious bad-guy antics and mediocre shounen-style magic battles. Predictability remains the name of the game, and predictable twist follows each predictably over-egged fight.

Falling back onto the idea of stadium battles, previous enemies are incorporated into team “good guys” and given their five-minutes to shine. Their opponents gradually become stronger, and new skills are discovered by the seemingly weak heroes to come out on top as the ass-kicking victor. Maybe it was the youthful exuberance of a mainly jailbait cast made the script seem extremely trite, or perhaps even the incorporation of numerous different storylines that felt stagnant as the show pulled to a close; either way, the series was lacking a certain je ne sais quoi - maybe story, maybe development - after initially displaying such immense potential. I mean dragons about to take over the world... really? And an evil mastermind betraying his subordinates... haven’t I seen that somewhere before? Tokyo Underground's latter episodes feel like an uphill struggle as idea after idea crowds its way onto the screen. A limited amount of plotlines would make this series fun and enjoyable; unfortunately, it seems no one told the writers in time...

Not completely terrible considering its age, Tokyo Underground is quite attractive but seems to have a natural aversion to giving character features too much detail. Although the palette is bold, especially considering the dark, subterranean setting, there are a couple of quirky additions that turn into major annoyances; one is the generic face shapes recycled throughout the twenty-six episodes, and the other a style design during soliloquies. As inner monologues unfold, the camera zooms into the characters face and the background turns to crackling black and white static – an effect that becomes quickly tiresome. Movement is severely hampered in a show that verges on shounen, featuring numerous battles that seem as professional as a Newgrounds flash animation produced from a ZX Spectrum. And forget impressive sword fighting scenes, the artists certainly did as they instead used white flashes of light to get the general idea across.

After my recent experiments in watching anime dubbed, I decided to give Tokyo Underground a whirl with the American voice actors in the driving seat. Call me a glutton for punishment, but the flat tones and unbelievable overacting makes me question how *anybody* could enjoy anything but subtitles. Chelsea’s nasal and emotionless whining is thankfully reasonably infrequent, as is Shiel’s childish irritation. Unfortunately, the rest of the cast don’t bring much more to the table, and as a result the entire audio of the show suffers. Even the soundtracks itself is altogether dull and forgettable, with a closing track that would be extremely lucky to grace *anyone’s* play list.

If I had a pound for every time the hopelessly pathetic Ruri wails “RUMINA”, I would be a very rich woman; set as the defenceless and painfully naive heroine of the show, it seems both good and evil want a piece of the action, and it is down to the aforementioned Rumina to gallop to her rescue on his white pony. I don’t mind femme fatales, in fact they can be sublime when done well, but they do need to have a little substance to their personalities to make them truly shine. On the other hand, Ruri’s hero is the stereotypical shounen: a muscle-bound moron that feels the need to tackle any obstacle head on. As much as I wanted to like him, especially with his painful plight against his Grandfather, a fleeting romance just wasn't to be: especially not with someone so dull...

Out of the entire cast, the most interesting personalities is Ginosuke. Frequently forgotten by his co-stars, he is mainly used as comic relief to a frequently serious story. Despite his humorous outlook, this geeky kid undergoes a significant amount of character development and manages to hold his own as the finale looms.

Overall, Tokyo Underground is an average anime served up with an extra large side of mediocrity. Maybe this is where the writers of To Aru Majutsu no Index got their befuddled ideas from, as both act like a newly born foal stumbling their way precariously through life. Although not in the realms of terrible, I certainly won’t be recommending the show to people for the reasons listed above. If you do feel an inexplicable urge to watch the series, then for your own sanity, please, please stick to the subtitles.

The story was pretty good in this anime.  Simple and a little overplayed, but well scripted and it had good pacing.  Basically, a long time ago, an "underground" beneath tokyo was built for researchers to study and experiment with supernatural phenomenon.  The most notably were dragons.  The dragons were awakened however, and the people on the surface, fearing the dragons running rampant and destroying the world, sealed the underground and everyone in it.  Since then people have continued to live there under the "rule" of The Company, which pretty much controls everyone and everything since they are the only ones capable of providing light, electricity, housing and protection for the common people there.  Due to the proximity of the people to the dragons though, many people born in the underground are born with special powers of the elemental variety, such as being able to control wind, water, electricity, gravity, magnetics and so on.  The Company seeks out and employs, coerces or simply forces anyone they can find with such powers to work for them, keep the population in check, protect against monsters, etc.  The head of the company however is most interested in the "maiden of life" who is the only such person to have the power of resurrection, in a plot to awaken the dragons once again to unleash on the surface world in revenge for them sealing the underground.  Chelsea (who was the Maiden of Life's bodyguard) comes to dislike the prison-like treatment of Ruri, the maiden of life and helps her escape to the surface world in hopes of keeping her away from the company.  Injured and seeking shelter, they hide out in Rumina's Grandfather's Dojo, whereby he finds them.  Rumina decides to help protect Ruri and when battling with a company assassin, he is injured to near-death.  Ruri then uses her resurrection powers to save him, while inadvertently awakening wind powers which his ancestors reportedly used.  Despite the efforts of Rumina and Chelsea, Ruri is captured and Rumina and Chelsea (along with Ruminas geeky friend) travel to the underground to rescue her.

All in all it was an engaging story, the plot was sufficient, the pacing was good and the characters and side plots were pretty much well-done.

Heres where Im really torn apart with this anime.  The actual animation was not all bad, it was simple but well-done, with a vibrant palette, attractive and appropriate character designs, and respectable backgrounds.  The bad part was everything else.  For one, being a pretty action heavy anime, the action was sub-par at best.  Most everything was still shots and other cost saving gimicks which honestly looked pretty horrible.  Another thing was the horrendous overuse of when they will "static" the background a little and black and white it while super-imposing the character(s) face(s) enlarged on top of that.  I mean, it would have been fine, but they used it at least thirty to forty times an episode.  It just cheapened the whole thing and made it look too much like a comic book (or a REALLY old american cartoon like old-school spider-man).  They even over-used it in the action sequences.  It was to the point where I half expected them to put BLAM/KAPOW or something like that along with it.  Honestly for a 2002 anime it really just does not cut it in the animation department.

In contrast to the shoddily-done animation, the sound was pretty good.  I rather liked the OP, an upbeat rock tune, while the ED was a softer melody and both played well to the themes of the anime.  All the voice actors were well chosen and did their roles well (I especially liked the choice of Ruminas geek friend, as hes the same voice actor as Kei from Onigai Sensei, he just fits the role perfectly).  All the sound effects were well done and the audio on a whole sounded crisp and appropriate.

The characters were on the average well done, but kind of a mixed bag.  The four main characters: Rumina, Ruri, Chelsea and Ginnosuke (the geeky friend btw), were pretty cliched but well thought out, given good enough background, and most importantly, given ample time for development and growing relationships.  At first Rumina looks to be the usual "dumb as a post, cocky and completely worthless" male lead, but once his powers are awakened, he comes into his own as a capable man.  Ruri is a pretty standard "oblivious, cute, magical girl with obligatory crush on the male lead"  But at least her childness (is that a word btw?) has a decent and believable explanation to it, aside from the usual alien/robot who doesnt yet speak English.  Chelsea is well done with clear enough motives, and Ginnosuke is probably the least covered of the bunch, but he does have enough side plot material and screen time to make his inclusion worth-while.  A couple more characters are given portions of a couple episodes for some back-story and side plot to play out but not too much or too little.  Enough was given at the right time to give those characters some depth or explain them more clearly, but never did it detract from the overall experience.

Overall, I cant say I was too impressed with this anime.  It certainly had a good enough plot and characters to make it a very enjoyable watch, but above average plot and characters simply cant make up for well below average animation, especially for an action heavy anime like this.  I was quite disappointed with this one I must say, as it had alot of potential.