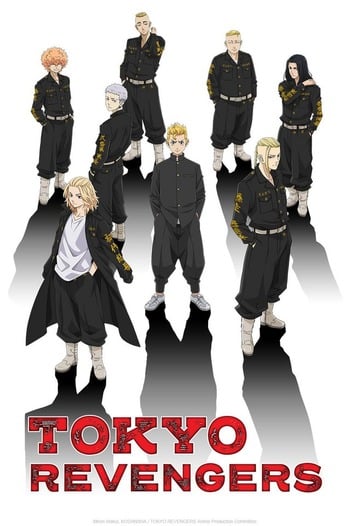 I have just watched the first episode but this gave me a huge Erased vibe.

The protagonist going back through time to save the girl, The first thing that popped into my mind was Erased.

they almost consist of the same story. I loved erased when i saw it because one it is only 12 eps long and second the story is great except the end everything is just fine but o can't say that for tokyo revengers because it only has one episode released but it has the same plot.

Both involve the protagoniat travelling back in time to save a friend from being murdered.

with these two anime you're going to find a lot of similarities.  such as someone that doesn't really have their life together that somehow manages to travel back in time trying to fix a problem of someone they lost.  they aren't done by the same company (nor same time), however the time travel aspect in an attempt to save someone and change the past is going to appear throughout.  if you're interested then check them out and see for yourself.

Both MCs goals are to change the fates of another person and they use time travelling to fullfil it.

Both focus on going back in the past to save someone, varying in intensity. I'd probably juxtapose Tokyo revengers as a "delinquent version of Erased" as Gigguk famously said

I watched Erased and was thinking about how it was so similar to Tokyo Revengers in the prospects that the character's goal is to go back in time and save someone, to change the future. I recommend it to anyone who watched either show and is looking for a new resort.

Both anime feature a protaganist with time abilities that aren't very reliable and have to see friends die, then go back to save them. Takemichi can go back into the body of his middle school self and cause a chain reaction into the future, while Subaru has 'checkpoints', usually around a day before. The obvious differance is that Re:Zero is an isekai set in a fantasy world, whilst Tokyo Revengers is set in the modern day (or the past) of our own world.

If you're able to weather the cringe of either of these then you'll enjoy the other.

The goals of these two stories are similar but the setting and how its told are very different.  For how immature TR is, it does have quite a few mature topics as well.

both follow the time travel theme, going back in time to redo their decisions. both mcs are traumatized from witnessing their friends die over and over again, but dont give up. and the openings for both shows are good lol

Using superpowers to enter their clientele’s photos one by one, Cheng Xiaoshi and Lu Guang take their work seriously at “Time Photo Studio,” a small photography shop set in the backdrop of a modern metropolis. Each job can be full of danger, but nothing is more important than fulfilling every order, no matter the scale…or peril involved!

I'm 90% sure that if you like Tokyo Revengers, you'll find Link Click at least interesting. Both animes includes travelling back in time.

Both animes' main subject is time travelling. During the timetravelling the characters try to change something that happened in the past. The biggest difference is that Link Click tells many different stories but Tokyo Revengers has only one storyline. Both include mature(ish) themes and are hooking.

In the city of Ergastulum, a shady ville filled with made men and petty thieves, whores on the make and cops on the take, there are some deeds too dirty for even its jaded inhabitants to touch. Enter the "Handymen," Nic and Worick, who take care of the jobs no one else will handle. Until the day when a cop they know on the force requests their help in taking down a new gang muscling in on the territory of a top Mafia family. It seems like business (and mayhem) as usual, but the Handymen are about to find that this job is a lot more than they bargained for.

First of all, same director so it has similar vibes. Both shows are gang related, involve fighting, and a little bit of fantasy. While Ganga doesnt have time travel like Tokyo Revengers, it does have some elements of fantasies with the twilights. Both are action packed and have a fun storyline that makes you want to keep watching more. So if you like gangs with a twists, both Gangsta and Tokyo Revenge would be a recommendation!

idk to me it just makes sense.

You get an introspection into Japanese gangs through these 2 anime although in Tokyo Revengers the protagonist enters the gang and grows in rank while in Tribe the MC is already in I think that if you liked one and wanted more then check out the other for more gang stuff, Tokyo Revengers is more of a slow-burner and Tribe is wackier as it goes on.

Both are about gangs. They both have fighting, and have at least some romance in them. When the characters aren't fighting, they're joking around. At least one of the main characters isn't as strong as the other characters, but they want to be. Both Eiji and Takemichi joined a gang because the leader liked them.

I loved this anime, so I thought there could be people like me who enjoy this sort of anime. If you choose to watch it, I hope you thoroughly enjoyed it like I did. Thanks a lot for reading this recommendation!

Crime-ridden Ikebukuro is a haven for violent gangs, the Yakuza, and home to Makoto Majima. To protect his friends, this charismatic troubleshooter mediates disputes among the warring factions—even fixing problems the police can't. But when a rising tide of violence results in Makoto losing a loved one, can he ride out the storm, or will he drown in all the spilled blood that floods his streets?