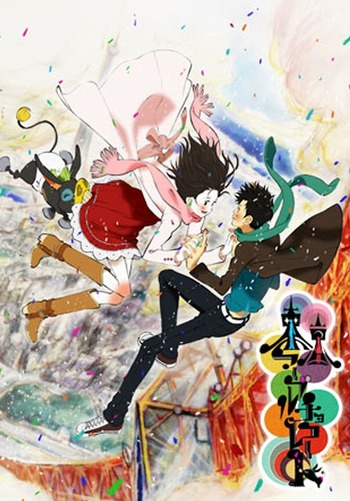 Have you ever been in a relationship which feels awkward although you are certain you love your partner, and this awkwardness could probably be resolved if only you knew what the other was thinking? Tokyo Marble Chocolate presents Chizuru and Yuudai, two lovers so insecure that they cannot for the life of them communicate their feelings - so the narrative does it for them, with each episode dedicated to telling a particular ordeal in their relationship from his or her point of view.

Although the notion of giving Chizuru and Yuudai each a chance to present their perspective is a fun one, it eventually gets a little tedious when you consider having to watch the same dilemmas over again. Plot-wise, TMC is not particularly deep and the events are not actually that fascinating since the characters just suffer a couple of cliché plot developments. Moreover, many of the scenes are reused and only a few of the changes made to accommodate the different experiences turn out to be genuinely memorable. For that reason, seeing the events played out from each point of view is little more than a clever exercise.

The most revealing feature of TMC is the reflective monologues each character gives as they go through their day; those moments are both intriguing and touchingly funny, and help to establish Chizuru and Yuudai as distinct personalities very quickly.

Apart from being typical, there is one more element that I just do not understand - namely, the choice of twist. Let me paint you this picture: an anime about two people unable to share their feelings will, at best, make for static viewing, so a catalyst is needed to move things along. Usually the romance genre has no end of readily available clichés to pick from - a third party love interest perhaps, or one of the couple gets a job somewhere else and has to move, or maybe a terrible accident jars them out of their emotional anaesthesia. But not a love donkey, right? Seriously, for some unfathomable reason, there is an aggressive, weirdly perceptive, diminutive, love-healing blue donkey in this story, causing slapstick havoc and generally being the only vehicle through which Yuudai and Chizuru can interact sensibly. It might just be me, but this injection of eccentricity just comes across as a cheap gimmick to spice up the otherwise nondescript series of events. Although getting used to it is not that difficult, and the donkey does provide one or two funny moments, I still wish more of an attempt were made to emphasise the serious human tale instead.

Rich in tone, sketchy and minimalist in style, a lot like what you would get if you crossed Bokura ga Ita with Paradise Kiss, TMC offers my favourite kind of animation. On the one hand, the combination of pale skin tone and the pink fingertips gives the characters a surreal and simplistic China doll cast. On the other hand, the backgrounds are highly detailed, dreamlike tapestries washed in muted pastel colours, and movement is smooth like silk. I enjoyed every visual moment to the fullest.

There is nothing at all wrong with the voice acting since everyone fits their respective characters to a tee and performs brilliantly. The soundtrack, however, could have done with a slight improvement. Although there is good use made of natural sounds, a more stylistically distinct score added to the stunning animation would have done wonders to enhance TMC's atmosphere and allowed it to make a stronger impact as a whole. Instead, we have to wait until the end of the episodes before anything memorable happens soundtrack-wise.

TMC manages to portray insecure, unhappy people in a way that makes them highly sympathetic; their likeability is probably due to the fact that their plight is one that almost anyone can relate to, but also because there is much thought put into developing them as mutually unique individuals.

Yuudai, a young man who is the complete opposite of what most men are stereotypically expected to be - protective, self-assured, the sexual aggressor etc - is thus a mildly frustrating person for others to understand. In fact, every girlfriend of his has at some point felt like she is engaged in a friendship with him rather than a love relationship, which is never a good place to be. Why can he not just say ‘I love you' and save himself a lot of the same hassle with Chizuru? In truth, Yuudai is more adorable than annoying because his macho deficiency manifests itself in sweet gestures and a mumbling manner. Importantly, he feels a lot more realistic for being a sensitive, kind and slightly dopey human being than if he were the stereotypically anguished, charismatic bastard that so many of the guys are in these kinds of anime.

Alternatively, Chizuru is the more proactive of the two since she has the strength to make a decision to break up, although she remains highly insecure about the way she handles her relationships. While she blames herself for all her broken partnerships, she still wishes someone would tolerate her clutziness and love her despite her flaws. Comparing the two, I find Chizuru less interesting than Yuudai because she is a conventional shoujo romance character. Completely absorbed in this angst-love, misinterpreting cliché scenarios, and whining about the situation without doing too much about it, her main value lies in the play-off between her needs and Yuudai's.

TMC is a short and sweet delight for the senses, although, ultimately, it is not as clever as it would like to be. Few surprising or unique revelations are unearthed despite the inventive style of narration - rather, they turn out to be quite familiar scenarios. I recommend this one especially to fans of Bokura ga Ita and its ilk because, with such superb animation and an undemanding running time, the typical content itself will be far from a turnoff.

It’s hard to find a good Christmas themed anime, let alone Christmas anime all together. Often, if there is something set around Christmas time, it’s is a special episode or OVA of an already established series that takes place at or around Christmas, but rarely is there something original that is focused on Christmas from the get go. So it’s refreshing to get something like Tokyo Marble Chocolate that focuses on Christmas.

Based on a manga written and drawn by Fumiko Tanikawa, the anime follows two people who’ve had trouble dating in the past as their current relationship with each other strains as they try and figure out if the other one is their one true love. This OVA consists of 2 episodes, both involving the same events, but with each one told through the eyes of each our two main protagonists. The first episode is told from Chizuru’s perspective, someone who has been unlucky with finding a steady relationship, especially since she’s very clumsy, always tripping up no matter what. The second episode follows Yuudai, an incredibly shy guy whose shyness is always getting in the way of him actually talking to women.

After what initially seems yet another failed potential relationship, with Chizuru planning to end the relationship thinking that it’s yet another relationship, and Yuudai struggling to finally overcome his shyness and finally admit his feelings to someone, the OVA follows both of them through a series of both misunderstandings and happy coincidences, as they deal with what they think was just another unlucky date. And all of this stems from a donkey with a mohawk. Yep, a donkey with a mohawk.

Tokyo Marble Chocolate is adorable in a lot of ways. From it’s unique and beautiful artstyle, animation, and presentation to the characters quirky shyness and clumsiness, it’s a breath of fresh air getting something this short, simple, and sweet. And thankfully, the characters shyness or clumsiness get grating or annoying, something that could have easily ruined this OVA if it had been any longer or complicated than it was.

I don’t know how much i can discuss with Tokyo Marble Chocolate’s plot since not only is it so short, and the plot in both episodes are so intertwined with each other, so you can’t really spoil one without spoiling the other one.But I can say that it’s really easy to root for out main characters to overcome the obstacles in their paths and finally get together and find their true love once and for all.

Also, a neat fun fact. If anyone was confused at this OVA’s title, “Tokyo” refersto the setting and the Tokyo Tower, and “Marble Chocolate”is the name of the cafe Chizuru works on but it can also be a reference to a white chocolate, which is a traditional romantic gift from a girl to a guy in Japan.

What I Liked: Animation's bright and sunny and fits the mood of the series. Character designs and animation are fluid and fit the genre. Even though repeated footage was used, it didn't detract from the flow of the story. Good use of parallel storytelling in two parts.

What I Didn't: Characterisation was a massive let-down - the protagonists' actions seemed illogical and immature. Every other character aside from the protagonists were depicted in a negative and generalising light (all men are pigs; all women are harlots).

Final Verdict: Animation was good, but the writing and characterization really let this OVA down. Sure, it was linear and employed parallel storytelling, but when the characters in your character-driven story start to sound more believable if they were transplanted to a middle school (instead of being independent young adults), you've got a huge problem.

Still it was cute, saccharine and probably better suited to people less cynical than I.

Tokyo Marble Chocolate is a cute 2-episode OVA that tells the story of an insecure couple.  While it does have plenty of the cliches that you tend to see in romantic anime, it also has two things that help it stand out.  First of all, we see both characters' sides of the story (one side per episode) which is a neat concept.  Secondly, the mini-donkey adds a bit of crazyness and comedy to what would have been just your regular romance anime.  While the story isn't all that deep, it makes up for it by being cute and light hearted.  It also helps that it has a satifying conclusion.

The animation has a pretty nice style that lends itself well to the lighthearted tone of the OVA.

The ending songs are pretty nice and reflect the two main characters well.  As for the background music, it gets the job done but it isn't very memorble.

Both the main guy and the main girl have major insecurity issues.  The guy is a coward who is afraid of hights (and other things) and has major difficulty in telling his girlfriend that he loves her.  The girl is a clutz who has had bad luck in her previous relationships and has doubts that her current one will last (hence, why she is planning to break up with her boyfriend in the begininng of the OVA).  Neither character is irritating, and I found them both to be rather relatable.  While some people may find some of their actions to be irrational, you have to keep in mind that they are both young adults (and young adults tend to be irrational even in real life).

Of course, the best character is the mini-donkey.  Not only are his antics amusing, but he also helps save the two main characters' relationship.

This is a cute OVA that makes up for it's cliches with it's cuteness and charm.  I found it to be quite enjoyable.