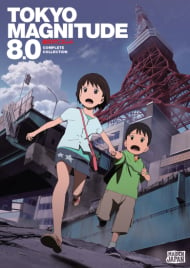 Story/Characters: You know what I hate reviewing? Good shit, because you can't riff on good shit or drop fuck bombs like The Boondock Saints. This is one of those shows. It isn't deep on plot nor does it do anything too outlandish or 2012 with the whole "Earthquake pwning Tokyo and surrounding districts" but that's a given for the disaster scenario and in it's in favour respectively. What it does well, is being a good survival show that feels real while maintaining a mix of quasi-adventure/journey type shit and horrifically sad and stunning. It's like... earthquakes and shit. Hence the title: Tokyo Magnitude 8.0, because Tokyo got rocked by an 8.0 magnitude earthquake, and some aftershocks that are 1/8 of the original earthquake and it's a magnitude 8.0 on the feels scale. But it follows a brother/sister combo and their eventual caretaker/biker chick as they make their way back home. Bam, plot. But it's more so the journey than the overarching barely-existing plot and it bloody works. It's not a crapsack world where everybody is a douchecanoe and pushes kids, jacks their food and punches their granny. It's people helping people while other people are typical disaster folk, trying to survive. Granted some are trying their hardest to be a nominee for Douchebag of the Disaster. It just feels real, feels authentic as the authorities are helping people out, people become refugees and help each other in times of need, good samaritans are around and it's not all "Eat shit main characters". Except because it's a disaster thing, it is "Eat shit everybody" as nobody gets out of this unscathed. Suffering around that totally undermines the animation and art, some shocking moments of things collapsing on people from aftershocks or the earthquake, it isn't gory or blood-soaked or anything and again, it works in its favour; discretion is the better part of valor. But you aren't going to get out of this unscathed because this is some seriously sad ass shit. The characters are realistic which adds to them being more endearing and likable; the realism is just... damn son, they be peoples with peoples expressions and emotions; peoples reactions and peoples being peoples. This isn't even including the more deeper themes, like grief and sickness, it's all done well. The story is simple, but the journey is outstanding- simple as that. And get some tissues. Animation: It looks bloody good for a 2009 show. It's clean, not sketchy or overly glossy; it's a nice art direction and it runs smoothly. The characters look good, the nice blend of being semi-realistic while not being too serious or cartoony. Faces portray a good amount of emotion to make you feel emotions and it's a pleasure to watch. The scenery is something else, it is fabulous! Matches the characters so nothing is out of place, solid CGI that can kick the shit out of a few shows released in 2017 or so and the destruction of buildings is righteous. Sometimes it's literally breathtaking, not just in actuality. This is the right time for it; not glitzy, not chintzy. Sound: The English dub is surprisingly good. Like, seriously good. It shouldn't be this good but it is. Solid and clear, voices don't grate on the ears and it may sound strange, but it sounds like the responders are actual responders responding to a crisis. And the music, mostly tops. When it accentuates the scene, it's glorious. When it's playing during a time of sadness or joy, it enhances it. The OP sets you up, the EP tips the dominoes. Overall: STOP MAKING ME CRY DAMMIT. Reviewed last minute for Secret Santa 2017 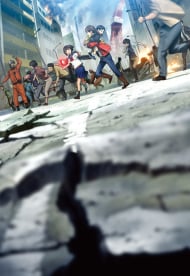