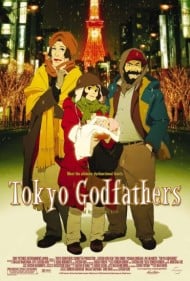 On a chilly December evening, Hana, a transgender woman; Misaki, a teenage runaway; and Gin, a retired bike racer, found little Kiyoko in the trash. For three homeless people, finding an abandoned baby might not have been the best of luck, but with good intentions and two cents to chip in, the trio set out to find the parents of the child. But locating the mother will not be an easy task, and all they have to go on is a small key...

StorySatoshi Kon wants everyone to perform a double-take. I am convinced this is his primary aim. His trademark spacey, frenetic style more than suggests a misspent youth of paranoid comedowns and an adulthood geared towards making the rest of the world experience the same. Whatever the truth, he’s clearly a master craftsman who knows how to weave highly original tales brimming with sophisticated weirdness. Unfortunately, amidst all that striving for conceptual elegance, the characters often get lost. Watching Millennium Actress, for example, I thought Chiyoko’s historical relevance abstractedly fascinating but never quite cared about Chiyoko herself, and in Perfect Blue, Mima’s psychosis was more gripping to follow than she as a person. Not so with Tokyo Godfathers. Here, Kon distils everything that’s essentially refreshing about his style and then injects it into a heart-warming, character-driven Christmas movie that will leave viewers thrilled and enthralled. At face value, Tokyo Godfathers sounds frighteningly similar to hackneyed Hollywood productions like 80s hit Three Men and a Baby. The idea of a cynic, a brat, and a homosexual dreamer adventuring through Tokyo’s underbelly, unravelling their personal neuroses, all the while trying to do the right thing by an abandoned tot seems potentially rife with corniness. In fact, with the numerous coincidences and quirky twists required to give the plot any coherence, there’s a real danger of it also sliding into farce. Luckily, the direction is masterful. Satoshi Kon oozes humour in the same way a supernova can be said to ooze light. Moreover, he turns out to have a dazzling knack for teasing out originality in his characters as much as he does his narratives. Armed thus, Tokyo Godfathers performs with aplomb, delivering a gripping quest involving gangsters, transvestites, thugs, and Latin American immigrants that brims at every turn with surprises. The pace, needless to say, is giddy and off-beat, but always fresh, as if Kon were making half of it up as he went. At the same time, all the elements come together smoothly, not least because of the thematic glue permeating the work – a poignant theme of lost families – which is at once universal and yet rarely explored in anime. The result is that Tokyo Godfathers plays out with the uplifting familiarity of a nativity scene whilst delivering an innovative, contemporary style and startling themes.AnimationThe budget here is generous and tastefully applied. Although Tokyo Godfathers offers fairly ugly but simple character designs that stand firmly in the realm of realism, practically everything else is an exercise in art. The three homeless guys are more caricatured than might be found in Kon’s other movies, but the detail in movement and particularly facial expressions are astounding. Crafted with commendable attention to their individuality (even the way Miyuki sniffs becomes a fascinatingly ugly detail), the characters move, speak, and express with theatrical preciseness. In regards to the environment, the setting is a buzzing Tokyo with rich layers and textures, a condensed microcosm of all the things that make a cosmopolitan city. Often, the scenery feels like the next best thing to a photograph, all the while exuding a larger-than-life ambience tailored to the big screen.SoundIn contrast, the soundtrack is unobtrusive; little of the jazzy riffs stand out as particularly striking, however, it remains robustly vibrant enough to support the light-hearted and dramatic tones of the narrative.CharactersThe cast as a whole is brilliantly human; they’re always funny in their tragedy and touching in their peculiarity. The main cast comprises three homeless individuals trying to find a child’s mother, but in the process rediscovering their own self-worth and the worth of the families they left behind. Simple enough on paper, but their development is challenging, witty, and scripted with remarkable creativity. While the cross-dressing Hana easily steals the show with his flamboyance (his rendition of ‘Climb Every Mountain’ warbled in camp Engrish is priceless!), the most involving background actually belongs to Gin, who struggles with the guilt of having abandoned his wife and baby daughter. The individuals they meet along the way, though colourful and continually intriguing, do not attain the same level of depth. They mainly exist as fortuitous helpers or fleeting antagonists, and serve the plot rather than help drive it.OverallMost of the time, Kon’s works remind me of a surrealist painting that’s very entertaining, but remains teasingly just out of the range of full comprehension (‘Alright, Kon, I’ll give you a nine out of ten, but just explain that melting face to me again…?’). Maybe Kon had a mental lapse – heck, maybe he ran out of drugs that week – but in being his only sentimental work to date, Tokyo Godfathers also proves to be his best. A must for anime lovers and a don’t-live-without-it for fans of Satoshi Kon. 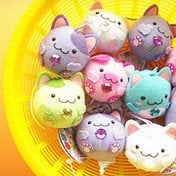 Despite the characters' jarring use of homophobic and transphobic language, this movie is a marvel of storytelling and expert direction. With powerfully engaging characters and a seamless narrative arc, it is in turns hilarious, heartwarming, thoughtprovoking and and introspective. A work of art, almost unexpectedly on point.

I really enjoyed this movie. It was one of the only anime movies that I had found aired on my tv screen some years ago. I can still remember how excited I was. Reading the subtitles to it just felt so right that day. Understanding a few words here and there and trying to sing along to its music at the end. It was all so wonderful. My mom just seemed happy to see me enjoy myself with it. It was definetely a sparkling time. The sun shinning from the the two story house that day made it all the more memorable. Definetely watch this if you have the time to spare, it's truly worth it. I know it was for me. The smile that lite up my face then, it gives a sense of joy even now just thinking about it.