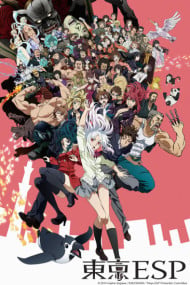 This was originally a recap on the finale(with spoilers) and final impressions posted on my old anime blog. The screenshots were lost somewhere in transition. Tokyo ESP title screen. Tokyo ESP is a bland superhero anime. Based on an on-going manga (at the time this was written) It seems to have drawn major inspiration from American-style comic books. Indeed, there’s even several references to international films as well. The series has its moments, but with little character depth, no real rhyme or reason to the super powers people receive and a serious — and I mean serious — lack of fun, ESP is mediocre at its best. If I was forced to summarize the series, I’d say the following; this is a story of people who develop mutant like superpowers, who then fall into two camps, the justice filled heroes and the morally corrupt villains. That’s it. That’s the entire show. So let’s break down the various elements and you can make your own judgment. Mean girls. All look equally terrible. The show looks terrible. It was animated by Xebec Studios, and I wouldn’t be surprised if it was outsourced somewhere. There’s almost zero variety between the character designs and the color palette is completely un-comic book like. It really looks like a 1980′s Saturday morning cartoon. While the animation isn’t as terrible as the designs — why bother? How can you possibly make lemonade without the lemons? All the audio is uninspiring as well — although not as atrocious as the overall look. The background music is sort of campy and sort of catchy in a superhero, actiony sort of way. The voice acting is erratically good at best. The dialogue is so campy and straightforward overall, the seiyus really had their work cut out for them from the beginning. That leaves us with the plot and the characters. The characters are 100% predictable in their nature. There’s too many and not enough time for each to grow as characters, or to portray any real depth. I’m ok with that generally, as long as they’re fun or interesting. Unfortunately, they’re not. As I write this, I’m trying to recall some fun moments during the series, and I’m coming up dry. There’s a fucking velociraptor on this show. I suppose that leads to the plot, which did supply some humorous moments, but not because they were scripted that way. More like, things were so stupid and/or so random, I couldn’t help but laugh. The references to the Ghostbusters or Bruce Lee are so out of place, and people riding on a magical penguin was just so damn silly. There’s many such moments over the 12 episodes. The storyline itself isn’t something worth talking about to be honest. There are superheroes and super-villains, victory and defeat, Justice and Doom, etc. I do have to point out a few more things to make this review complete. First up is — appropriately enough — the first episode. First episode spoils everything, but has this shot. So, the first episode of Tokyo ESP was unnecessary and hurt the series overall. It’s pretty much a giant flash-forward to events that take place at the end of episode 11 (or there about). Which means it contains spoilers for an assortment of things. While the events in episode one aren’t repeated exactly, I would still wait before watching it. Watching the first episode after episode eleven would be my advice, should you choose to accept this mission. Also, be aware that there are two bait and switch examples early on, or perhaps just the bating. Not that kind of bating. Well, one example concerns that kind of bating maybe. So, there are scenes early on that are incredibly violent and bloody. This led me to believe that the show would pull no punches when it came to the action sequences throughout. Wrong. It never gets more bloody than in the bullshit first episode. Secondly, in episode two (the real first episode), we see Rinka, the main character, nude. White girl shows up — bating material. It fits in the context, so it’s fine (so fine), but this led me to believe there would be lighter moments, maybe some fan service, or I thought perhaps that Tokyo ESP wouldn’t be taking itself so seriously. Wrong. What fan service-like moments are in the show, feel so out of place that you can mark them down in the WTF column. The series has some moments of promise, but overall could have been a lot better. If the story was inspired by classic Marvel and DC stories, why not just copy them even more. The bad origin stories, lack of variety in powers and numerous other problems, force ESP to actually power down. With it’s sub-par everything I’d give Tokyo ESP a generous 2 out of 5 Kitsunes. While watching this, I probably haven’t rolled my eyes as much since I was 14. I never did think of dropping this series, although I have to be honest here — if i wasn’t recapping this all season, I wouldn’t have watched it. Would I recommend this series? Jeez, that’s a tough one. If you’re into campy superhero stuff that doesn’t need to make sense, look good or be entertaining, then yes, go ahead and waste your time. Otherwise there’s lots of slightly better mediocre anime to watch. Thanks for reading my Tokyo ESP reviews all! One last time -- Wonder powers activate!

Rinka sees a penguin flying in the sky towards the Tokyo Sky Tree. She chases after it only to find fish swimming in the air. (yes it sounds crazya nd yes it happens) One of the fish goes through Rinka and causes her to pass out. She wakes up to find that she has developed the ability to slip through solid objects. theres also someone that can read the emotions in an object, someone that can read minds, someone that can see into the future and so on. all these espers (the magically inclined) are not all on the same side. some want to just hide their powers and live on as normal people, some want to become heroes, and some want to use their powers to take over the world (theres always one isnt there). Rinka starts out falling under the first category but ends up being pushed into the second. her and others like her band together to stop the attacks from the a-holes who want world domination. the anime ends before the worst has come but the battles are still epic. the begining has a bit of a slow start but stick with it and you wont regret it. 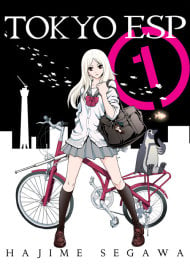 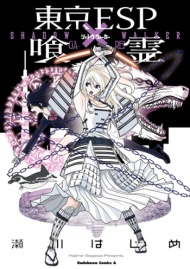 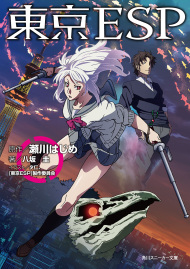 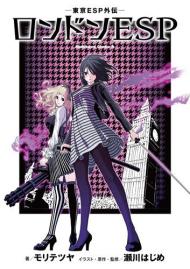