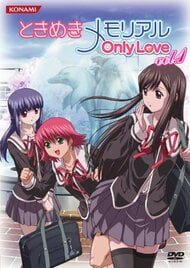 Due to his parents' work, Riku Aoba is about to transfer to Tsumugino Private High School; but it's no ordinary high school! Unlike other student bodies, Tsumugino's academic system has a great deal of freedom; and as a result, Riku is often dragged into various schemes the student council has created, resulting in him being chased around the school for a prize reward. To make matters even more complicated, three of the most popular girls in school are falling for him. With such a busy school life, how will Riku survive?!

StoryIn an attempt to get a review out to all my wonderful fans in time for Christmas, I recently plowed through Tokimeki Memorial.  Likely the worst romance anime to beset my eyes since Green Green, it was one of the most painful anime I've had the misfortune of watching. It took me many sittings to finish, but in the end I managed to dredge through it with the liberal use of mankind's greatest invention: the fast-forward button; without it I dont think I'd have lasted three episodes.Anyway, quite possibly the worst part about Tokimeki is that, even over the course of twenty-five episodes, absolutely nothing happens.  Despite romance being the clear and central theme of the anime, any sort of romantic development is entirely non-existent.  Like most generic trash romances, every potentially heart-warming moment between the male lead and one of the girls in the series always finds itself interrupted by random, out-of-blue events; I can recall a number of instances, for example, where Aoba gets swept up by the baseball team to run laps with them right as the girl's about to confess.  This happens incessantly, multiple times per episode, and becomes taxing very, very quickly.  Hell, even the very last scene in the anime is plagued with this, and I had to force myself to squeamishly sit through it.  Have no doubt, however, that it is quite touching: our brilliant, gallant male lead gathers together twenty-five episodes worth of courage to ask Sayuri her phone number!  Amazing!Okay, I do admit, though, that the romance between Aoba and Sayuri wasn't that bad in general; it did have a few good moments toward the series' latter half.  The other two girls, however, were an utter detriment its enjoyability and buried any chance it had at being tolerable, especially given their huge amount of air-time.  The first of the two, Kasuga, happens to fall for Aoba simply because she bumps into him in the school courtyard.  Simple minded as she is, she spends the entire anime chasing after him spouting off non-stop how much she loves him.  The second, Yayoi, happens to be even worse, as she's just some random girl with a crush on him.  Never mind that Aoba is a transfer student and she would never have met him before the series began - she's on the swim team, which means girls in swimsuits!  Hooray, I think.  Her call to fame is calling up Aoba and crying to him about how much she misses him despite the fact that they are acquaintances at best.  I wonder if I'm the only one who finds this creepy and disturbing.To make it worse, there isn't even any drama in the series to keep the viewer even vaguely amused.  You'd think that with three cute girls vying for Aoba's affections there'd be some sort of tension, but nope, not a chance.  Whenever any possible cause for friction arises Kasuga and Yayoi join hands to "team up to win Riku-kun's love!"  while Sayuri blushes and says nothing.  It got redundant after three episodes, so you can only imagine what it would be like to sift through twenty-two more; boredom doesn't even begin to describe it.AnimationThe only appeal in Tokimeki comes from the fact that the three main girls are attractive, and even then I found some of the side characters more attractive than Yayoi.  Surprisingly, though, aside from a few girls locker room shots, there's not much ecchi present; the opening credits probably have as much as the rest of the series combined.  There were a few nice scenery shots scattered here and there, too, but really nothing worth mentioning.  You can find much better animation (and much cuter girls if that's why you'd be watching) in other series of higher production value, so there's really absolutely no reason to watch it.SoundAbout as memorable as the face of a random stranger you pass by on the street.  The musical score did its job but nothing more and, coupled with unremarkable voice acting, there's really not all that much to say; you certainly won't be hunting down the OST for the series anytime soon.CharactersSayuri was definitely Tokimeki's only memorable character, probably due to the fact that she kept her mouth shut most of the time; when pitted against rivals with the IQ of a gnat, though, it's not saying all that much.  Still, I at least found her story to be somewhat entertaining, and is perhaps the only reason I managed to get through the whole series.  Unlike all the others, her faint trace of depth allowed her to come across as sincere, but it meant nothing since little actually happened between her and Aoba over the course of the series.  Her general likeability proved her only saving grace, but again it's not enough to warrant watching twenty-five episodes worth of trash.As for the others, Aoba was a typical, run-of-the-mill harem male lead, so there's little to say regarding him.  Again, Kasuga and Yayoi were both banes to the human race and should have been completely excluded from the series.  Ayame, Sayuri's best friend, showed some potential, but she was given very little screen time so it's hard to pass judgement on her.  I could go on and list more, but really, there's no point; none of the characters in the series are really any good, period.OverallI should have been paid to watch this crap, seriously.  No matter how many ways I try to look at it, Tokimeki Memorial was downright awful and shames the anime world.  While the girls may be cute, stick to a screenshot if you're really that interested, as they're much more attractive when you haven't had to watch them prance around like retards for nine hours of your life.  If you want a mediocre romance to occupy your time there are plenty others out there to choose from, just stay as far away from this as possible.

When I first watched this I didnt know that it was based on a visual novel, so now it makes sense as to why the romance aspect was portrayed like that. Nothing much happens throughout the story, the animation is also okay but my favorite part is the sound. For some reason my brain remembers this song even though I have not heard of it for years and when I watched this anime again I went, oh so this is where I heard that song. Idk it feels nostalgic to me for some reason, well it does sound good after all. The characters arent really that memorable but you will like them at least, I even remember cheering for the blue haired girl to win aoba's heart.  Besides the song, I probably liked the chasing scenes the best. Some random things happens but thats fine. Not everyone might like it but it isnt trashy. 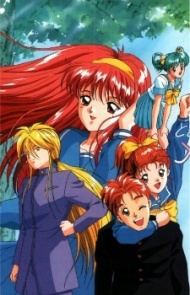 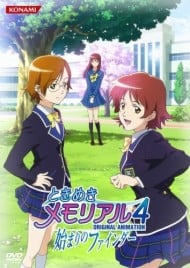