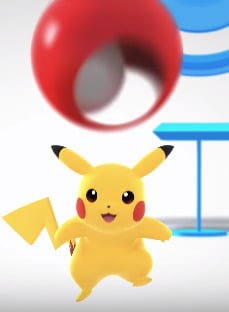 If you're looking for anime similar to Toho Cinemas x Pokemon Go, you might like these titles.

The game depicts a peaceful world wracked by giant devastating whirlwinds. The player control boys and girls who became Soul Workers and wage battles against mysterious monsters for the fate of the world.

When Kakeru arrived at his friend the Professor's house one day, he had no idea he was about to embark on the adventure of a lifetime! Monkeys have gotten a hold of pipo helmets – a device that stimulates the nervous system and increases fighting ability by a factor of three hundred times. With this power, monkeys could easily take over the world! And thus, the Professor sends Kakeru through his dimensional transport machine to capture all of the pipo monkeys and save the world. But that won't be easy, as the nefarious Specter is determined to use the monkeys to dominate the planet!

On the day before Christmas, Pikachu and its Pokémon friends are playing in a snowy town. But their snowball bowling game goes awry, and Totodile's snowball knocks a passing Delibird out of the sky! Delibird crashes down onto Meowth and Wobbuffet, who were out for an innocent stroll, but a wild Skarmory is annoyed at the racket and sends them all blasting off. Delibird has another bumpy landing, and now it's in a panic because it's lost all the presents that were in its sack. If they're not found by midnight, they won't be delivered for Christmas! Fortunately, Pikachu and its friends will help Delibird find all the presents.

Crazy antics snowball into a major Pokemon quarrel and it's up to Pikachu to spread good cheer before it's too late!

The Team Rocket scientists attempted to make the most powerful Pokemon in existence and they succeeded. A clone made from Mew’s DNA, Mewtwo was enraged at his existence as nothing but a tool for fighting. In his anger, he destroyed the Team Rocket base and established a base in the middle of the ocean, inviting strong trainers to come and face his army of super clones. When Ash and company are invited to the island, Mewtwo’s intentions become clear and it’s up to them, the other trainers, and all the original Pokemon, including Mew, to stop him. The battle of Pokemon vs. clone begins!

While children such as Ash collect Pokemon and battle it out with fellow trainers, others, like Ben, are Pokemon Rangers. These special people must keep Pokemon safe from the likes of Pokemon Nappers – thieves that poach and sell the creatures for profit. As a Pokemon Ranger, Ben will go toe to toe with the evil Red Eyes, save Latios and even Raikou, and become friends with a special ukulele-playing Pichu.