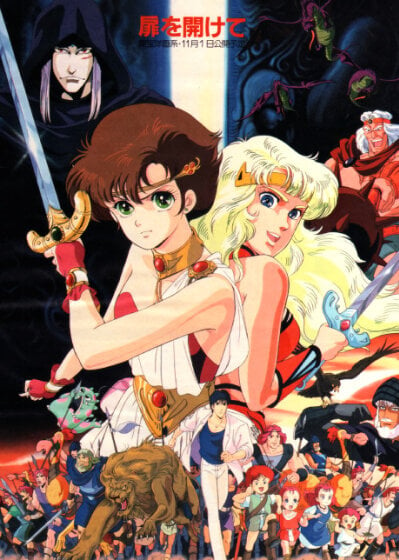 Tobira o Akete is about a college student nicknamed "Neko" that has pyschic and telekinetic powers. She is joined by two friends one that can teleport and the other that can turn into a lion. Their powers are heightened when the moon is full. One day they are transported to a fantasy world. Neko is recognized as Neryulla by the people there. Neryulla was a Princess of legend that fought off an invading army many years in the past. This Princess had magical powers. Because in this world the moon is always full Neko and her friends have greater powers and this just makes the people believe more that she is the legendary Princess. The story has several characters. The main ones get some development which is good for a just a 70 minute movie. The story is typical in many ways but it adds nice things as well. Neko is finding herself on this journy as a young girl. She takes the role of the Princess and fights back the evil military that has ruled the land for many years. There is a twist. But I won't spoil it.

Animation wise it's not great. For a movie the quality looks like it was made for a tv series. But Demida the Orge Princess was still hot, so it's not that bad. I could over look it. I'm not picky on appearance. The sound was good. There were two songs in the movie which were good. The characters were likable for the most part. Neko has some annoying habits, but she is someone that you can root for. Haruka the playboy is a little annoying. Demida my favorite is really cool. It's good that we get some background on her character. The villian had strange motives for what he did, but he was ok. Other charactes were just there.

Overall I enjoyed it. I would watch it again. This is not in the league of other classic fantasy setting animes like Slayers or Escaflowne. It's a good watch. The characters are likeable for the most part. The animation is not of great quality so it may turn off some people. But it's a solid watch for fantasy fans.