To Your Eternity - Recommendations 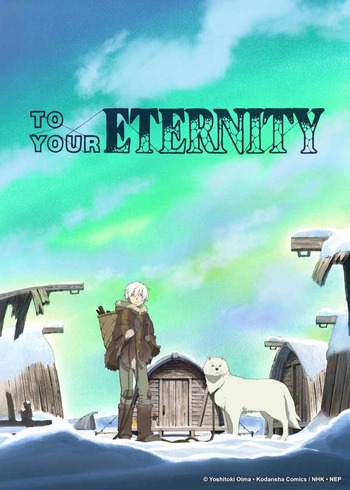 Natsu Soramiya and Kana Hiragi, two middle-schoolers are now in a very familiar but strange world.

The Girl From the Other Side: Siúil, a Rún

In a world split between the Inside and the Outside, those living in both realms are told never to cross over to the other side, lest they be cursed. A young girl named Shiva lives on the other side, in a vacant village with a demonic guardian known only as “Teacher.” Although the two are forbidden to touch, they seem to share a bond that transcends their disparate appearances. But when Shiva leaves Teacher’s care to seek out her grandmother, the secret behind her mysterious living arrangement comes to light.

After a terrible earthquake, Satoru wakes up in a pitch black cave that him and his friends were exploring. Desperately moving through the crumbling cave with just his backpack, he expects a warm rescue once he gets out. But what awaits Satoru was an unbelievable fact: Japan has sunk underwater due to the earthquake and he is stranded on an island with no one to help him. Can Satoru learn how to survive by himself?

Can you see the island in the sky...? Most people think it's just a metaphor or some weird hoax, but for those rare students actually capable of spotting the island floating in the sky, they are afforded the opportunity to enroll in Naraka High School. Graduation promises a cushy government job and a life of wealth and prosperity. It almost sounds too good to be true. Momiji Rokudou is a first-year who spotted the island and enrolled with dreams of the dazzling life that awaited him, but those dream quickly turn to nightmares when he learns the truth of the old adage, "if it sounds too good to be true, it probably is." Naraka High School offers a unique education, to be sure. The campus is a killing field floating above the earth, and the only requirement for graduation is survival! Best of luck in your studies, Momiji...

Kawana Tomoko, a 15 year school girl, doesn’t care about much. Everything from her social life to school life is a blur. One summer day, while waiting at a bus stop, Tomoko finds herself waiting with her classmates, Sasajima Miyuki, Yatomi and Sannou. There are nasty rumors flying around about Tomoko and how she had relations with Yamashita, a teacher at their school. As the group boards the bus and the awkwardness reaches its max, a meteor comes out of nowhere and hits the bus sending everything into a frenzy.

In a dangerous land where fantastical creatures exist, humans must live beside dragons and other supernatural monsters. That’s where Mythical Beast Investigators like Ferry come in. Ferry might look like a young girl, but she has extensive knowledge of magical creatures and dreams of creating peace between humankind and monsters. With her otherworldly bodyguard Kushuna by her side, Ferry will work to calm any conflict, no matter where that takes her!

The hit social network game "The Magical Girl Raising Project" selects one out of every tens of thousands of players to become a real life magical girl. The lucky chosen girls gain magic powers as well as incredibly good fortune, and spend their days blissfully. But one day, an absolute announcement declares that the number of magical girls has risen too high and must be cut down to half. Sixteen young maidens are thrust into a merciless, deadly contest to survive...but how many will come out the other side?