To Heart: Remember My Memories - Reviews 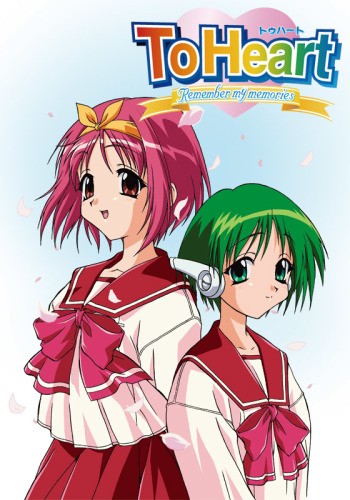 Warning:I swear a lot yada yada yada and all that shit.

I cannot believe this.I c-a-n-n-o-t fucking believe this..I knew something was wrong from the very first season.I knew it reminded of something hideous,something that still haunts me to this fucking day.And to be honest i'm really surprised nobody and i do mean NOBODY made the connection between them..

But then it hit me like a wrecking ball in the face(yes that's also my excuse for being so damn ugly)...It reminded me of the UCT.UCT is a term i came up with and coined to describe the Unholy Cancerous Trinity,known to you lot as Kanon,Air and Clannad.But whereas in the first season the hints where hidden under a layer of absolute nothingness and pure boredom this was the one to jump to the drama ship and party like there's no tomorrow.

Now i won't mention who told me to watch this piece of shit cause i intend to torture him and kill him in the most gruesome ways known to man.The dark ages will seem like  a trip to the zoo you sadistic motherfucker.I;m coming for ya bastard and there's no place to hide.

But this season is more like UCT in each and every way.And we start with the animation.Cause for this season they took a leaf outta Kanon's page and made the characters look like they've been in a nuclear factory accident.The eyes are worlds apart,the mouths are on their chest and the foreheads are as big and hideous as a whale that's been dead for 2 weeks.but crucially it's a lot better than the old one..But a lot of things are better than the old one..Do you want an exotic sounding disease that will make your flesh rot?

But it's ok that's not the biggest prob you might think...I thought so too,i mean i am one of the few survivors of UCT after all,this shoulda been a piece of cake,right?NO...SO FUCKING NO....It's the whole story,the whole force-feeding the drama..I can't believe i'm gonna say this but this is actually way worse than anything we've seen from UCT.Get this for a story..It's about the robot maid from 1st season who has now lost her memories...Seriously..That's it.They're all making a fuss about a robot losing it's memories...God give me strength..And as if that wasn't enough we also get......Some fucking love triangles or octagons if we count every girl including the robot aaaaaaaaannnnnnndddddd of course some supernatural shit as well.

And of course like the UCT this has an MC who is annoying as fuck and a voice that can make even a buddhist monk go berserk.Fuck the Kanon lookalike animation done 100 times worse than Kanon.Fuck the pathetic excuse for a story.His voice...His voice is the only thing that can drive me nuts.I think we must vote him as the most annoying,nerve wrecking voice of all time.It's such a big turn off that after say,2 mins,i swallowed a whole cart of Xanax.

Again i have to say that all the characters and i mean all of them in this season are more...Alive.It certainly isn't that snoozefest the 1st season was.But then if breathing some life means making them all so obnoxious that it makes me wanna set them on fire and listening to their screams as i drink a nice coctail..Funnily enough the only bearable character is a girl who never speaks,but whispers instead.I love her..

I'm not gonna beat around the bush,this is just a Kanon rip off gone wrong.Kanon is as sweet as a bag of sweet crap compared to this.And this coming from me.And if you read my reviews of UCT you'll see i'm not the biggest fan of that moe shit either.Though i have to say...You big fucking hypocrites...This is almost exactly the same thing as UCT but...See the rank?So basically this proves a point i made in another review.You just watch the anime and rate and review according to what other people think.Don't get me wrong,they're both rubbish.But you cannot possibly praise one rubbish and bury the other.