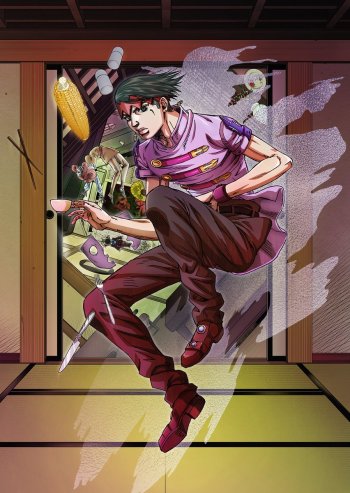 Imagine if JoJo went on a honeymoon with Tales From The Crypt.

But are the stories insanely creepin yet hilarious? Yes.

I can't wait to read this, because so far...the anime is the best thing that came out this year!

This is a good ghost story!

The story wasn't overarching, it was rather individual stories per episode, but nonetheless they were very captivating. The stories are told by Kishibe Rohan and focus heavily on other people's experiences which he observed, and usually he is/was looking for content for future manga. Heaven's Door, Kishibe Rohan's stand, made a few appearances which was nice to see. There was lots of gore involved in the story though, so take that as you will.

The animation is like that of the main JoJo series, which I always really liked personally.

The sound ? I mean it was just as you'd expect it to be. I watched it in sub on Netflix and the sound quality was fine. The intro (if you'd call it that) was nowhere near on level with the JoJo intros from the show, but I wouldn't expect it to be so idrc.

At the end of most episodes, Kishibe finishes telling his story, and by that time he's been joined by some of the other side protagonists from Part 4, e.g. Koichi, Mikitaka, Yukako, Okuyaso, acting in the way you would usually expect them to. Yukako is still madly in love with Koichi, Okuyaso is still kind and saying what's on his mind, etc. I don't really have many of my own opinions on Kishibe but in most of the episodes he uses his intellect to solve the problems at hand if you like that. There are new characters introduced, but due to the short length of this show, we never really get to know them well, other than Yoma Hashimoto from the last episode. I find him really annoying and rather scary personally.

Overall: if you liked JoJo, and you want to see some more animated JoJo content (part 5 animation no confirmed at the writing of this review), then I'd advise you watch this. It's relatively short as well so there isn't much harm if you don't end up liking it.

What kind of JoJo's rip off adventure is this? Shockingly gorey for no reason, desperately trying to be edgy and gruesome. Add to the main character who narrates literally everything in an annoying voice. Each is seperate stories with no over arching storyline. Forced myself to watch two and gave up. Although looks beautiful, don't waste your time.

just kinda disappointing and while it fits the general theme of part 4, it doesn't fit jojo