Those Who Hunt Elves - Reviews 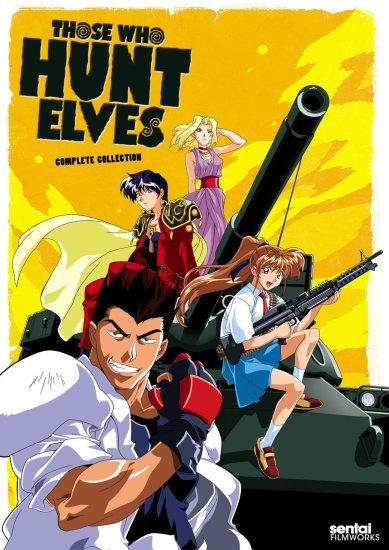 Wow… this is, um, different. It feels that they sort of ripped off Slayers and Lost Universe with the different dimensions that the characters cross over.

Lets talk about the characters, shall we? There is a young high school girl named Ritsuko who seems to have a tank and tons of guns and ammo. How a high school girl gets her hands on a tank, not to mention all the guns and ammo she has, I will never know. Not to mention, she actually knows how to use them well. Her character is a bit duncy and slightly annoying at times because she is a natural high school student with a military fedish. Jumpei is really freaken stupid and does tick me off. I have heard of stupid macho men but he takes the cake. All he seems to care about is food and his high and mighty actress, Airi. He always fights Ritsuko and just… I can’t deal with him. Airi is so high and mighty about being an actress, though she does have a kind side, it just a little off. And yet… it feels like it all works. Even when the tank itself becomes a character, it works pretty well for the comedy that they are trying to keep.

Unfortunately, the ending of season one just feels like a cop out so they can do season 2. Seriously, I just feel they did what they did at the ending to make more money with the second season.

The artwork is lacking a lot. Characters look blocky, animation loops, and a lot of it doesn’t have a lot of textures. Characters also seem to thin. I feel that the animation is some of the weakest that I have seen in a while. It’s sad because I think that it just needs a bit more love in the drawing. It really looks bad, seriously.

The music is a bit strange for the opening, and doesn’t sound right for the comedy in the show. I don’t know but it feels way too serious for what it actually is. I love the dubs script since it adds more comedy in it though it goes off from the original script a lot. The voices on the other hand really fail at times making characters hard to take seriously when they need to be or just plain annoying. Sometimes characters seem to of been given given new voice actors who have no idea how to actually act. Many times they end up yelling way too loudly. They seem more like Bible Black in some aspects but luckily they don’t go into sexual stuff… well, not that badly.

It’s fun to watch, but trust me that it isn’t the best. It’s rather laughable that works with the comedy but they can’t do a serious scene when they really need it. Even though I can’t actually give this a really good rating, its still fun to watch.

What I Liked: The catchy opening and closing themes. The characters are all funny to watch, especially the actress Airi and the hapless elven priestess Celcia. The setting, which has a blend of "real-world" props and quasi-fantasy world tropes that is (eventually) questioned by the characters. The trial. The Ending. Animation is bright and colourful.

What I Didn't: Action scenes aren't all that well animated (which is a shame when a whole episode hinges on it). The Ending. Animation is average for its time.

Final Verdict: Those Who Hunt Elves is an adventurous and enjoyable little fantasy-comedy series with a catchy set of opening and closing themes, lots of visual humour and a fun ensemble of characters. Although the ending leaves a lot to be desired and the animation isn't top-notch, the series still shines and is surprisingly inoffensive despite its plot outline.

One of the old school anime that has enough awesome action to beat out a lot of today's anime.  The hilarious premise of finding markings on naked elven girls is just part of the charm.