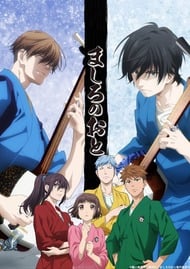 When Setsu’s grandfather died, so did Setsu’s “sound”—his unique creative spark. Grieving, he goes to Tokyo to find himself…but manages to become totally, literally lost on his first day. Only a chance meeting with Yuna—aka Yuka, the hostess—saves him from being robbed. At first glance their lives seem totally different, but they’re both striving for their dreams—hers, of being an actress, and his, of developing his talent with the shamisen—and it could just be that life in the raucous, unfeeling urban sprawl of Tokyo could just be what binds their fates together…

Wind From the Mountains

Summary: alright so i have watched many music related animes before purely for the sound and music. However, the story is what's supposed to keep you attached to the show and help you enjoy the sounds. The sound BTW are almost perfect and beautiful as expected of japanese cultural music. The place it lacks in is the writting department and not delivering enough of a punch. The buildup gets interupted and the flow is broken several times throughout the show. Especially the last episode was a big dissapointment, atleast for me. They built this hype up and it just got nowhere because the MC still needs to grow and learn there are others better than him. i don't like that. All this hype and the show ends with him crying and being depressed and as usual he gets some sort of motivation to become better. i mean that plot almost sounds like shounen manga type genre. and from the looks of it a second season is not yet in works so the anime might just end at this terrible cliffhanger or it might take a long time for a follow up.  Conclusion: THE MUSIC AND SOUNDS ARE EPIC BUT THE STORY AND DEVELOPMENT IS KINDA MEH.....

It's well written, the quality of the animation is top-notch and the character development is off the hook. I loved all the songs played in this anime, especially "Tsugaru Ohara Bushi". The person singing for Umeko's part has such a powerful tone to her voice that made me listen to that song on loop. One of the underrated animes out there. I would suggest giving it your time. It's really worth watching.

TL;DR - Beautiful music and animation with meh characters. I mostly like the show. The music is incredible, and they did a really great job with the animation. Even if it's not 100% accurate with finger movements, there's a lot of detail and finesse that's mostly skipped over in other music-themed shows. You actually see all the subtle picking and strumming animations, and the finger movements are also done very well. So in terms of aesthetics, definitely amazing. Even the overall story is interesting and fairly good. It's got a fine premise, and I like competitions as well as underdog stories, which we get. What I dislike, however, are some of the important characters. Everything about the main character, for example, including how he's sometimes an ass, is half-assed. We're given the premise that he's a genius musician guy who's "lost" and struggling to find his sound because of his grandfather's death, yatta yatta yatta. But his behavior is too stoic for that. He seems like he's unaffected and uninterested in most things, but when it counts, he's suddenly this passionate, gung-ho guy who suddenly pays attention to and cares about everyone. They justify this totally BS bipolar behavior with his "quirk" that his skill level is entirely determined by how he's feeling when he performs. Which could be interesting! But it's poorly executed. I equally dislike a lot of the side characters. It really doesn't spend the required time building up side characters and their motivations. The premise for each of them joining the Shamisen Appreciation Club is nonsensical, and there are dramatic moments that come across as melodramatic because again, we didn't really get enough time to care about or understand them. Shuri has done nothing all show except being shy, crying, and getting upset (mostly at herself for being useless), which is ironically what makes her a useless character. Otaku girl Yui makes zero sense. Why is she doing any of this? Kaito is supposed to be the straightforward, energetic, and passionate guy who acts as a foil to our MC, but the only thing he's done all show is getting mad at MC for being stoic. Rai is semi-interesting, but again, we don't explore character backgrounds, so he just shows up as the friendly, funny, gay guy who happens to already have musical skills. From what I've seen so far, every other character and their background are just plot devices for our MC to "find his sound." Another thing that really pissed me off is the first episode. The description of the show/manga makes Yuna, the first girl you meet, to be this super important character who helped him find his sound again. But then after the first episode, she disappears to "go find her dream" and then our MC is back to being lost again. What the hell was the first episode even for? Why aren't we getting more Yuna, who was actually a likable character? Geez, Louise. 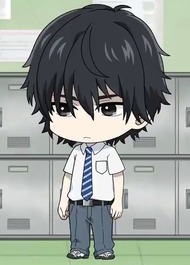 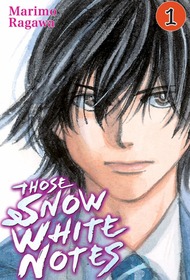