This Ugly Yet Beautiful World - Reviews 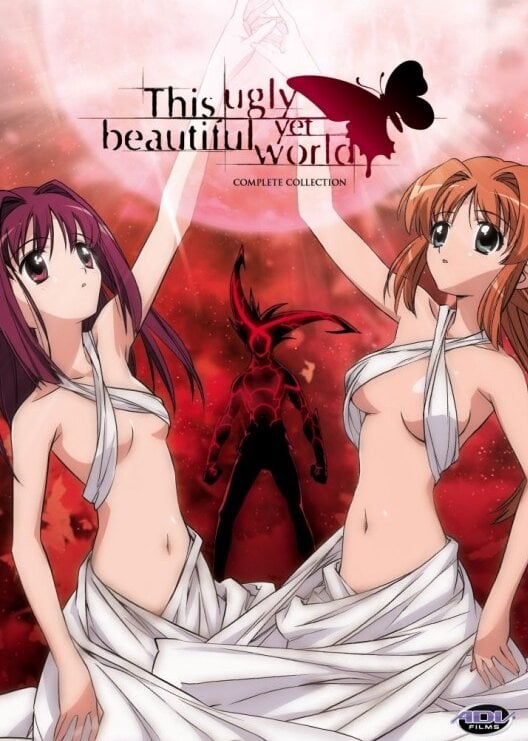 As story goes it wasnt great but it wasnt horrible either, I started watching it in English but couldnt stand the voices so switched to Japanese early on...I hardly see alien type animes (I dont know if its because they dont interest me??) so that part was new and innovating for me.  I kind of have nothing to say about this series or storyline because I felt it was all too corny for my liking, in fact I was down right bored but NOT bored enough to rate it lower that 4 out of 10...

Usually animation for me is good, this being no exception.  And although the art was pretty good, I didnt like certain characters (I'll save that for Characters lol).  Again really nothing to say about the animation aside that it was pretty good...in fact I rated it the best out of all the categories.

Sound was fairly good, there are three pieces of music used in TUYBW (<-- didnt feel like spelling it all out.), one opening and two endings.  The opening is "Metamorphose" by Yoko Takahashi which is good balance between melody and some pop (but it isnt a head banger type of song) ~ out of the entire opening however I liked the images used rather that the song itself.  They were also pretty good about syncing it with the opening itself.

The first ending is "Natsuiro no Kakera" by Yoko Ishida and I have actually heard another song by her (which happens to be the Pretear OP: White Destiny); the song was catchy and it reminded me of a song I would dance to at the beach lol.  The song is used throughout the majority of the anime.

The 2nd and final ending is "Kimi ni Aete" by Kawasumi Ayako & Kiyomi Ai and it is only used in the final episode, I really cant remember the song at the moment but I remember it was a cute melody perfect for a finale.

The main heroine is Hikari and the main hero is Takeru, two people I rather did not like for main characters; I actually preferred Hikari's other half: Akari.  Hikari and Takeru were suckish when it came to being a couple and Hikari was mostly whinning throught the anime; I didnt like the overall balance of other characters and I felt they were sort of unesscary to the anime itself...bad choices....

Overall it was good but horrible at the same time.  Didnt quite enjoy it like I thought I might but whatever what's done is done... ~ Again a warning for all those of you who are minors(i know it's not your fault i'm sorry)or just some seeking attention whores who get offended even by their own breath.This is a review that contains high doses of mature language and sexism and some other stuff i can't be bothered to write down.So,feel free to bugger off.The rest of you,welcome and have a seat cause things are about to get interesting.

This Ugly yet Beautiful Turd.Why i paraprhased the title?Cause it is ugly and it is shit.The only beautiful thing about it are the nude scenes.That's the only thing that this anime shines at.But let's see in full details why this anime is like snorting a bad batch of cocaine.

And we start wiiiiiiith....The freaking story,which unfortunately,if you see the suggestions,is very similar,in points at least,to the one of Elfen Lied.BUT while Elfen Lied is a fucking masterpiece and even though it had low budget issues,this is a teratoma that blatantly copied a great idea and made it even worse than having your naild torn off by drunk Germans.So what you need to know storywise is that our 2 male MC's are off to make a delivery on a bike when they see a light in the sky that...Oh you won't fucking believe this...Follows them..A stalker light..How brilliant is that?Or maybe i'm wrong and the message is that murderous psychotic bitches are the path and the light or something to a greater tommorow.Who knows..The light then divides itself and the lads follow the one nearest..If they had another person with them they could pass as the 3 wise men..Only the MC's didn't find a puking infant but a grown naked babe stuck in a tree...Which oddly reminded me of some ecomaniacs some years ago that made sex to trees..Why?Where sex dolls that much of a bother?Anywho,the daredevil MC picked up a babe.......AND OH FUCK A FUCKING MONSTER!ARE YOU FUCKING TRYING TO GIVE ME A FUCKING HEART ATTACK FUCKERS?Actually it was quite a nice monster.Maybe it had a toothache and acted out.But amidst the confusion our hero of the day gets a heartache and can't control his body..And now you are expecting me to say that the monster slaughters them and that was that..That's what they wanted yoy to believe..No GAINAX is better than that,the MC turned into a monster himself.Short story the chick they saved is some kind of freak that has the power...Sorry let me check my notes...AHA to disembowel monsters in an instant.I'm sorry this has to be the most creative piece of storytelling since the bitch with the 7 dwarfs.I won't write anything else cause i'm so mindblown right now it's mindblowingly mindblowing..And well...spoilers.Don't want those right?Not that i'll be spoiling anything great but to each his own.

Onto the characters then..The only thing you need to know about them is that they are stupid beyond belief.How's this for characters?When the psychotic alien bitch tells everyone that she is indeed and alien the only reaction they had was..What clothes might suit her best..Imagine if you will,going to your house with a naked woman and telling your folks she is an alien..And that you turned into a monster and almost killed a gigantic insect..What do you think would happen?Of course you'd be both on your way to get some electric shock treatment.In this anime?Noooooo that's too cliche of a reaction..Why did they even bother with characters and didn't just show us some plants talking to each other?

Soundtracks and VA?I was looking at them boobs man who gives a shit about songs and voices anyway?

The animation was splendid.I haven't seen boobs this beautiful even in Penthouse.

Overall this anime sent all my reviews to hell.This is the worst of the lot.In all this time i've been reviewing anime i've seen shit that my brain still can't process them.This one though easily surpasses all of them in pure shittiness.I don't know what Gainax was thinking at the time,maybe the whole building was on drugs the day they produced it.I cannot possibly think of a reason for this anime's existence.To give you an example of how bad it is,i showed it to a friend of mine who's into S&M..Do you know what was her reaction?She burst into tears asking god for forgiveness..

Cute girls, sleeping monsters, silly robot with a pinch of action...typical. It is enjoyable and you can grow to love the characters (considering the short 12 episodes). The story was nothing special and actually quite common in the world of anime. Two lucky boys find a pair of helpless, cute girls in the middle of the woods and vow to protect them from danger. Personally i find those type of things quite stupid. The boy never met this girl before and after a single monster attack, promises "never to let anything happen" to this girl.

The plot was dry and confusing. It is like they tried to mix secret government experiments with supernatural phenomenons and romance...which results in a big mess of everything with the story all around the place. If they focused on one or two categories then the series could have been more enjoyable but alas the writers couldn't decide whether they wanted to see a little teenage romance or "insanely over-super powered boys fighting monsters even Goku (Dragon Ball Z) would have trouble with". Another thing that really annoyed me was the level of emotions the characters were made to show. The feelings of love and affection were OK but when in came to the fighting parts, a medical report from a dermatologist has more emotions than what they put in the series...Its like their friend is fighting a huge, bloodthirsty monster the size of the building and everyone else just looks at him like he is doing the laundry. Something on the lines of "Oh, your fighting that mile long sea monster? Just make sure you don't ruin your shirt and be back by dinner time..." Another con would be the lack of action itself. There are probably only 3 action scenes in the whole series and even then they lack any type of "fight".

Animation effects are OK. Nothing to remember as really good. I felt the quality of the character design and background varied at most parts of the anime. Some frames were done really good and others looked like they were made in MS Paint. At least the animation was more fun to watch than the sand-dry story they were trying to feed us.

Can't really put a score on the sound because i hardly noticed it. It was boring and didn't really improve the overall quality of the anime. i do not believe it matched the atmosphere of the anime, partly because the was no real atmosphere to go with. Due the the storyline and plot all over the place, the sound suffered, yet it was not really noticeable to begin with.

The characters are likeable but have next to no background (except the main character Takeru). No background on the girls who came from outer space or the friends of the two main characters Takero and Ryou. Seems like all of the characters are orphans. Sudden appearances by unexpected characters really helped in downgrading the rating. Out of nowhere this scientist chick comes to live in the same house as the alien girls and the lucky boys...followed by a robot which was sleeping in a school wall (wtf?) and who can't decide if it is related to Terminator or Wall-E (no pun intended...).

Overall this anime is a good time passer but nothing more. Worth watching at most. Skipping altogether would save you a few hours of your life though.

Its alright...and that about sums it up. It feels a bit nostalgic, like an anime from they 90's, which includes all of the cliches and problems of back then. The sound and animation is standard I suppose. Most the characters I can't stand, the main character has nothing going for him, and when something shows up for him to protect, he suddenly gains the motivation to spend every once of energy forever protecting her, because she most obvious needs it. Its mostly drama, with some action between huge monsters and the hyper powered main character. Anyways, its okay, feel free to skip.

(Since I'm not english, I'll try to speak correctly) The storyline is rather weak, and the endingis quite rushed. However, each character have his own nature, which affect much the progress of the story.