This Art Club Has a Problem! - Reviews 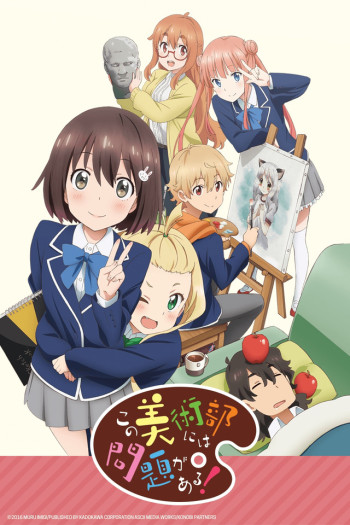 This anime is good and definately worth watching . There isnt an actual plot or something . Its just art club members doing some stuff that makes you smile . There is good amount of comedy and 1 sided romance . There are some moments when you cant control your laugh and some romantic moments that will make you wanna hug ur pillow :) . Its light hearted not that much of drama . Every character is likeable and have unique personalaties . This anime have quite a lot of adorable moments espically the whole walk of moeka with club president it was so freaking cuteee :D . The only thing bad well not bad I guess not likeable by many people is the dense male lead , imo he isnt dense he just isnt into 3d girls XD( just like me :P) . There is romance but if you want relationship to progress maann  idk what to write . There are some good moments and the ending imo isnt that bad . They are in middle school what do you expect , anyways definately will recommend if love some rom/com . Animation is good and the opening is awesome too and as mentioned earlier every character is adorable and likeable . Try it maybe you will love it :D .

I HOPE THAT MY REVIEW HELPED YOU ^^

HAVE A GOOD DAY AND LIVE AN AWESOME LIFE :D

This is actually a rare thing, to have a highschool comedy and for it to actually be funny for its 12 episodes, that's pretty amazing. From the beginning Usami has a thing for Subaru, now this romance doesn't go anywhere, in fact the anime sticks to comedy, I know some people were a bit disappointed as they did not end up together. But I would rather have this, the comedy is quite entertaining enough there's no need for teen drama romance.

Each episode is divided up into 2-3 parts each with it's own mini story and of course it involves members from the art club doing crazy and wacky things and that's about it really, to be fair that is a good thing in this case have a simple premise works out for the best.

The characters really shine, all of them a quite funny and they don't have deep backstories nor do they show much development, but they are very entertaining that that's all that matters in this case.

You're watching this purely for it's comedy, it doesn't have anything else and it doesn't need to, this show is very entertaining if you want a good laugh and nothing more.

This Art Club Has a Problem is a sweet story of young love ... with a wee little touch of perversion (just a smackerel, really) which makes it interesting.

Mizuki Usami is an idealistic middle school second-year who is crushing painfully with fellow Art Club member Subaru Uchimaki.  She has been trying to attract his attention for all that year, with limited success.  And ... wonderful how complications flesh out ... should she ever get Subaru's notice, Mizuki freezes up like a popsicle.  But fat chance of this happening.  Subaru is totally into the 2D girls of anime/manga, and 3D girls like Mizuki don't interest him.

Throw more interesting characters in the mix.    The Prez is a third-year whose ability to sleep is a marvel.  A slacker worthy of being the illustration in the dictionary, Prez still can offer sage advice and is resourceful with problems, should they arise during his lucid moments.  Colette is the spunky first-year who manages to provoke embarrassment for Mizuki by just entering the room.  Maria is a transfer student and prospective rival to Mizuki for Subaru's attention.  And she is more 3D in certain girly categories than most.  This thought brings up the new Art Club advisor, Tachibana-sensei, who has the hottie aura to her, but her bumbling nature and lack of self-confidence balances her out as a teacher struggling to be relevant.

The episodes come as a series of connected vignettes, all with the theme of girl (desperate) inching along with boy (clueless) down love's path.  Emphasis: inching.  There are moments, such as when another girl confesses love to Subaru, is rejected, and then she assumes that it is because Subaru and Mizuki are close.  Later, Subaru and Mizuki are locked in the Art Club's storage room, producing little conversation and no results.  Later, Subaru confesses that he is falling for Usami.  No, not her, but an anime character who just happens to share Mizuki's last name.  Subaru asks if he could begin calling her by her first name.  Mizuki, to her credit, demands that Subaru earn that privilege.  While hopelessly in love, Mizuki is not hopeless.  She has understood that all of Subaru's waifu-drawings had been modeled after her.

The anime technique is passable, but there is something about the character design.  Too much tendency to borrow.  Mizuki's friend Ryouko looks too much like a red-haired Momo Kawashima from Girls und Panzer.  One would think that Hikari Kokura dropped her rifle,  escaped from Chidori High, and assumed the role of Kaori Ayase, Mizuki's overly-protective friend.

The sound and music thrive with the theme of art, which shows how much I need to keep up my art theory.  Though the projects and competitions took a back seat to Mizuki's crush on Subaru, it was refreshing to see how shared interests, even ones heading in opposite directions, could act as the catalyst for things that could take years to mature.

So, what of the ending?  Do we need a second season (the Prez promises he won't be there, going on the high school)?  Can we be content with that understanding Mizuki seems to accept about the course of true love never running smoothly?  Or can we read that twinkle in Mizuki's eye that maybe Subaru is ready to add another dimension to his notions about girls?

Everything about it was awesome!!! Musics, characters, jokes everything was on the point. If you want something refreshing definetally reccomended

Very heartwarming anime, beautiful art style, and absolutely adorable and funny. Made me sad to finish the last episode, but it was amazing.