They Were Eleven - Reviews 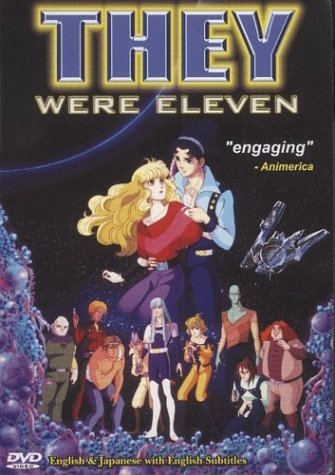 It's a time-honoured dramatic device to the point it's become clichéd: trap some strangers alone and see what happens. If they have reason to distrust someone - but they're not sure who - all the better. That they're students with their futures on the line is also good. Naturally, there's also some plot twists - and since it's set in space, some standard sci-fi complications.

They Were Eleven takes all these ideas and executes them superbly: this simple fact is what makes it worth watching. It could succumb to mediocrity or melodrama like so many of its peers - and yet it doesn't. Even the internal logic holds together nicely, with awkward conveniences getting tidy explanations at the end.

However, many of the plot twists are predictable - only one of them genuinely surprised me, although that one admittedly knocked me cold. Of the rest you may guess some of the most pivotal developments early on and one development employs sci-fi clichés so hoary any veteran fan should deduce how that will conclude.

In a lesser film this could sink the plot - or at least hardly justify me giving it the rather high grade I have. Though TWE may not be the most scintillating mystery it is thoroughly engrossing and smartly concocted space opera, with nary a dull moment as it moves effortlessly through its story. You won't be left guessing but you will be left entertained.

TWE's animaton is solid and competent if unremarkable; it won't impress but has aged rather well. Visually it's the usual space opera fare from the eighties, pleasant to look at but hardly revolutionary (not that it ever needs to be).

Character designs may sport goofy hair or, in one case, a rather literal rednose, but generally they're very good. The aliens either look exactly like humans or only slightly different - nothing more exotic than Star Trek, which is a peculiar approach for animation.

Another odd choice in character design is one that makes a key twist needlessly confusing. I can't elaborate for fear of spoilers - and the decision makes sense in context, but not quite for reasons that have much to do with the plot.

The music is unmemorably inoffensive synth.

Despite featuring fan favourites David Lucas and Wendee Lee (Spike Spiegel and Faye Valentine in Cowboy Bebop) the English dub is somewhat corny. I found the Japanese track altogether better but then I usually do.

As TWE's title makes abundantly clear there are eleven characters, though only the few principals get any development at all. The secondary characters aren't even given basic personalities - they're just there and that's kind of it. Our protagonists, however, are more than adequately fleshed out. They may have some weird alien abilities or identity issues, but they still feel relatably human.

The inevitable mistrust that emerges in the group is never handled with excessive hysteria or paranoia, which I found a welcome change. While there is the standard tendency featured in this scenario for characters to immediately judge a book by its cover, a lot of the tension comes from reasonable if dire extrapolations. They can be irritating but still sympathetic, elitist yet not absurdly so - and so on.

With engaging characters and an interesting plot, They Were Eleven is great entertainment. The film may not deliver elaborate action sequences, nor does it throw any high concept weirdness at the viewer, but there is an effective blend of character drama and classic sci-fi conventions. Strongly recommended for fans of the genre.

They Were Eleven is a prime example of what awesome old-school anime should be: a work that overcomes its dated animation and sound through the sheer awesomeness of its over-arching story.

Many "classics" of yesteryear have become obsolete due to their reliance on animation that has long since become absolutely awful. They Were Eleven avoids this pitfall neatly; although the animation is by no means sloppy, the clear focus is on the story, where all their efforts go towards providing extremely taut suspense.

For the most part, they succeed. Like Black Jack (another anime that not nearly enough people have seen), They Were Eleven more than held my attention for the entire running time. The movie presents a whodunit steeped in sci-fi flavor and peppered with an urgent theme of survival.

In short, the anime is about a group of individuals (anyone who successfully guesses how many individuals gets 11 points) trapped on an abandoned spaceship. Part of the story revolves around the characters struggling to overcome the numerous obstacles put before them. An equally prominent element, however, involves the characters working to unravel the mystery of why they're actually there in the first place. When combined, the two elements form a riveting narrative, and are alone enough to make the show well worth watching.

Granted, the show isn't perfect. Although the ending does possess a certain amount of guileless charm, it's still nonetheless hokey and predictable. Plot holes are certainly there if you look for them, and while the animation and sound are still decent, they certainly haven't gotten better over the past couple of decades. However, for anyone who enjoys obscure 1980s anime, this is pretty much as good as you're going to get.

The age is going to make the show's visuals guaranteed to suck to some extent, but it's really not as bad as you'd think. Clear, crisp character designs combined with competent backgrounds allow for visuals that are tolerable, if not actually good.

The first thing that came up mind when I was watching this was how the creators were possibly going to develop eleven characters in the space of a 90 minute movie. The answer, of course, is that they don't.

Basically, they ignore most of them and focus on just three or four of the group. These characters, while not particularly deep, are at least fairly developed and moderately likeable.

An unexpected production forgotten by most, “They Were Eleven” is a small albeit concrete adventure of a spacecraft crew trying to survive all alone in the middle of nowhere. Partly mystery and partly survival, the movie is dense in plot but poor in proper duration and aesthetics to allow all its various subplots to be properly presented.

The backdrop of the movie is very rich; it’s about various interstellar organizations sending their candidates to a place where a test is to be made and only one will be accepted to win. The nature of the test is unknown but was reinsured to be non-lethal, plus they were told they would be only ten on board the vessel. Yet they are now eleven and things get out of hand as they lose control of the situation. The entire movie is about finding out the truth, while surviving the ordeal and I can’t get to details without spoiling all the fun.

Having eleven characters is of course not enough time to be offered proper emersion and development. Only three seem to stand out as “mains” and the rest are flavor. Plus, we get almost nothing around the different backgrounds of each one of them and we only have the mystery and crumbs of personalities to keep us interested. The interaction amongst them is otherwise strong, as you see how they need to trust and cooperate with each other despite their differences.

The production values are too undermined as well. There is no awesome animation or well planned action sequences and the music score goes unnoticed. It is hard to keep the average viewer interested without something worth looking or listening to.

In all, this movie would be better off with a mini series and better production values. As it stands it is an interesting but very dry premise. Otherwise, it is worthy to be looked into since such types of stories are rare even today.

Why has this plotline, taking a bunch of people and putting them in a survival situation, gotten so cliche? Well, it's because of stories like They Were Eleven. You have to remember this film was released in 1986, before this plotline became cliched. They really took the time to craft a complex melodrama featuring about five of the characters, and the rest just fell by the wayside. Suspense and tension run very high here; it's worth watching once, but once you know what happens, it becomes boring.

Here is the video review expressing my opinions: https://www.youtube.com/watch?v=L0rnpq2w6HE

In short, what I say in the video is that the characters were wellwritten but suffered from a cliche storyline, the ending was out of the blue as well.

The music was well-composed, as were some of the backing visuals, the faces could be somewhat static and not on par with, say, Cowboy Bebop, but still far better thanmost animes today.

I gave this a 7.8 because, as I say in the video, I think above all movies benefit from originality and this one is chock full of it.