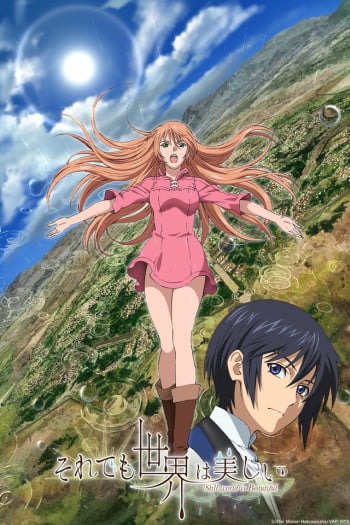 If you're looking for manga similar to The World is Still Beautiful, you might like these titles.

Both stories deal with an older girl moving away from her home to marry a younger boy.   As she is from far away, not only does she have to get used to living with her new family, she also has to get used to new customs, new surroundings and new ways of thinking and doing things.  She also brings quite a lot of the latter two with her, which she is not afraid of sharing!

While I would originally find the premise a bit icky, due to the age of the boys (12 in the two stories), I found myself overlooking it completely so quickly was I drawn in by the characters in both the anime and the manga.

These stories are about two people building a relationship which will help them to live their lives toghether.  A bit of romance enters into it, but no really age innapropriate passion.  So if you like historical, fantastical settings, slice-of-life scenes, and strong female characters, you'll like these!

A Tale of an Unknown Country

16 year-old Princess Rosemary is furious with her older brother Prince Mash. Without her consent, he has promised her hand in marriage to Prince Lionel of Yurinera. Although the two kingdoms are neighboring countries, they are worlds apart. Arudera is a small, poor country filled with an abundance of greenery and untouched nature, while Yurinera is a very large and wealthy nation. Princess Rosemary decides to disguise herself and journey to Yurinera to sabotage the marriage proposal and sneak a peek of her husband to be. But when she arrives she discovers Prince Lionel to be completely different from the cruel and cold-hearted person he is rumored to be. Despite her original plan, she finds herself falling in love with him!

Himitsu no Himegimi Uwasa no Ouji

Roochen and Galnia are two countries that have been at war with each other for a long time. Now that peace has been established, princess Aldina of Roochen has to marry the prince of Galnia. However, according to the rumors, the prince of Galnia is a total debauch, and he does nothing but playing around?! Aldina wants to see for herself who the prince really is, so she disguised herself as a boy and tried to approach the prince...

Shinpei is 8 years older than Hikaru, and due to her grandfather's health they got married. But does Shinpei really love her or is it just fatherly love?

Satoko is a domestic girl with a kind heart. She lost her father when she was little, and her family has been very poor ever since her father's company shut down. However, life is happy enough when you are optimistic, and Satoko enjoys her daily life heartily. One day, she is rescued from a attacking dog by Fuuma, an extraordinarily mature 10-year-old boy. Little does Satoko realize that this boy is the head of Wakudera Corporation, as well as her future husband!

When listening to a nostalgic voice in the crowd of people, Soo-Won looked back without thinking. However, it was not the girl of his memory...