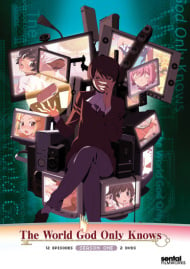 Keeping in mind the source material, this is a faithful and enjoyable rendition. As an adaptation of a lengthy manga, it is hard to stand on your own legs as an anime at the 12 ep mark. Nevertheless, I highly recommend this series to anime fans whether they've read the manga or not. Story: 5/10Keima Katsuragi is a gamer of the highest caliber roped into using his gaming knowledge to woo real women. The driving force of the story is Keima's contract with Hell and its 'special' envoy, Elsie, to gather escaped souls from their invariably attractive, female hosts. A comedy gold mine, but episodic and lacking in depth. The progress of the story across the series is practically non-existent, but the story doesn't kick off in the source material until much, much later, so we can't really blame them.  Like the galge that it simultaneously parodies and pays tribute to, the individual heroines carry the weight of the story on their shoulders. If you like the heroines, you'll like the story. Otherwise, probably not. There is hope, however, as the story will eventually come out if the anime continues long enough to catch up to the manga.Animation: 7/10 Believable, if not terribly exceptional. Art direction is normal, though the uniform design in particular bears mention as being quite eye-catching. The execution wobbles a bit between realism and abstract SD, but manages to maintain a relatively consistent tone overall. While not really a selling point, there is little to complain about barring a single scene in which one of the heroines emotes strangely (too much head bob!)Sound: 8/10 Consistently good OP/ED pairings are, sadly, rare in modern anime. Kaminomi delivers. The OP in particular stuck with me and I deliberately watched it through every time for every episode, which I rarely do. In-show music is understated to good effect. It sets the mood without stealing the show. This is no Noir or .Hack, and fans of sweeping orchestral moodmaking will go disappointed, but it works.Characters: 8/10 As previously mentioned, the heroines are the bulk of the content here. Getting to know and understand each conquest target as Keima methodically assembles his routes and ending is a delight. Each of the 4 featured girls in season 1 are solid and carry their respective routes quite respectably. The Keima/Elsie duo stays far away from romance (though there are occasional hints that Elsie would not be averse to the idea), and specifically targets comedic content. Elsie is adorable and ditzy but begins to grate by the end of season 1 due to a complete lack of relevance to any given scene. Keima steals the spotlight 100% of the time, leaving Elsie with nothing to do except motivate the perpetually uncooperative God of Conquest to do his job. Overall: 7/10Though hampered by the slow pacing and the source material's lengthy spin-up time, Kaminomi manages to strike a solid balance between a manga and an anime. It certainly isn't the blockbuster hit that many fans hoped for, but perhaps it will become so if the series manages to catch up to the story before fans get bored. Watch it, enjoy it, don't think too hard about it.

The World God Only Knows looks to be a promising series. This opening season was a great introduction and I'm really looking forward to season 2 coming up in the Spring. The series takes the format of a collection of mini-stories, each one involving Keima (the main character) wooing a female character in order to rid her of her inner demons (literally, loose souls is the term that is used). After which, the female character's memory of Keima is erased. As such, the way I'd like to approach this review is to focus on each mini-story as its own entity. "Capture" 1 - Ayumi Takahara This first capture might only be one ep and it's mostly just an introduction to what becomes the norm for plot progression in the series. But, the story's kinda cute and even though this capture obviously lacks the depth of the later captures, it's able to plant the seed of intrigue to keep you watching. "Capture" 2 - Mio Aoyama The second capture is two eps and considering that Mio is a rich prick, you might be surprised that this capture manages to get quite emotional. You've gotta feel at least some pity for the girl. Trying to uphold an image she can no longer sustain, living in the past because that's all she knows, etc. And the greater significance of this capture is that you begin to get the sense that Keima really does have some mutual feelings as much as he may try to deny it. "Capture" 3 - Kanon Nakagawa The Idol. This capture for me (and I'm sure for most of you who have watched this series) was the hook. Ironically, there's a Nazi parody in the 1st ep of this mini-story that I found to be in such poor taste I nearly stopped watching this anime. I'm not a Jew, but I'm sorry that's one line you just don't cross. I'm not trying to be self-righteous here; this was a minor blemish on a great series. Moving along, this capture is the longest (I think, it might be a tie) at 4 eps. Kanon-chan is so paranoid about not being a true Idol that she literally disappears into obscurity when the paranoia kicks in. This capture is also difficult on Keima's end because he hates Idols. But, in less than probable circumstances, Keima and Kanon-chan start to go out. And in the end when Kanon-chan is facing the greatest challenge to her self-doubt, Keima's there to save the day. And when Kanon-chan sings "Love Call," I found it to be one of the most touching moments in anime. On that note, Kanon-chan's character album is now available and overall is good for the pop Idol genre. If I had to choose one character that I wanted to come back in a significant way in this series, it would certainly be Kanon-chan. At this point, you're certain that Keima left some of his heart out on the line. "Capture" 4 - Shiori Shiomiya From the Idol to the Bookworm. It's a stark transition, and it takes a little while to adjust, but once you do, you realize how unique this final capture is. This capture is also 3-4 eps. The majority of the first 2 eps of this mini-story has almost no verbal dialog. But Keima is able to frustrate Shiori so much that she is finally able to find her voice. The conclusion to this capture is a bit abstract which is an interesting change of pace. I'm not quite sure where I stand in terms of good or bad. But certainly, Shiori came to be compelling character after all. Some final notes, the OP is really unique and I quite liked it. The full version is like 8 min which is certainly rare. There's also the matter of Keima's shinigami partner whom I haven't mentioned, Elsie. She's a cute, awkward little character, but doesn't yet have her coming of age in season 1. So that's surely something to expect in season 2. Lastly, I'm not gonna pick on the ending too much this time around, but it was appaulingly bad. It was more like a really crappy OVA than a last ep of the season. But all in all, I'd give season 1 of The World God Only Knows an 8 out of 10 both for content and promise. 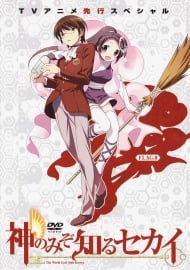 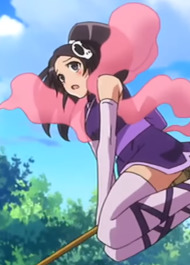 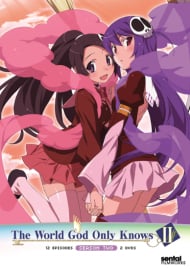 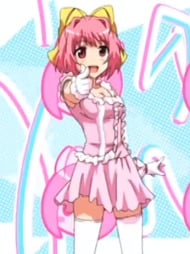 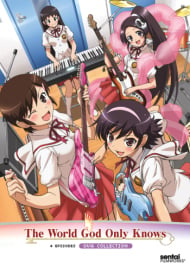 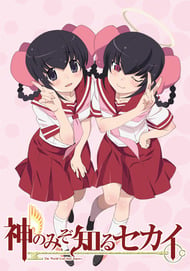 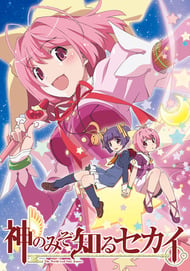 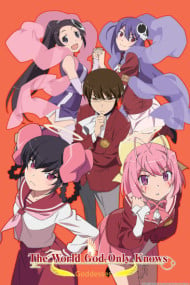 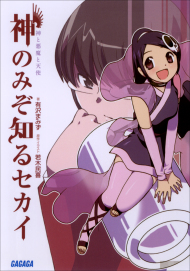 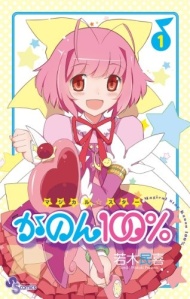 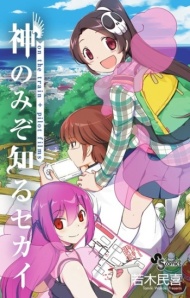