The World Ends With You the Animation - Reviews 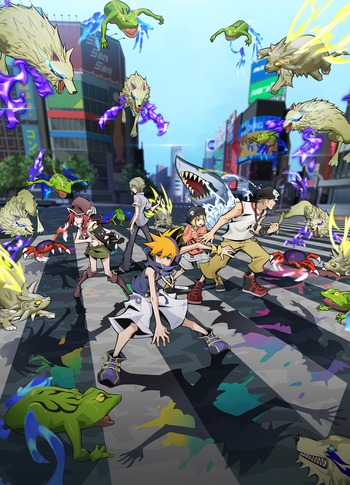 I wanted to watch this because the name was kinda interesting. I hadn't played the video game before I watched it and now, I am absolutely sure that I still won't play it.

Everything in the storyline was predictable. I foresaw what will happen from the beginning like I wrote the scenario for it. Of course, there were one or two incidents that  I didn't expect but it wasn't enough for making an entertaining show.

Then why did I watch till the end, you ask? Well, that's because I hoped it would get better. I really did. I thought I will warm to the series a few episodes later, but then I realized that I had already finished the show.

The fights were dull, like very boring. The fight effects were ridiculous and it was a letdown.

I only loved some of the characters...and...that's all.

If you want to watch it so badly, try it and if you don't like it, don't waste your time as I did.

This is not a stand-alone anime; this is a video game recap made to look like a series.

This review is expanding on a reply I made to another reviewer. I felt it necessary to understand the purpose and context of this series before watching it.

As a fan of the original game, I was excited when an anime was announced, hoping that it would allow more people who haven't played the game access to this great, weird, interesting original story and the complex characters therein. Sadly, though, this anime was never meant to be a complete experience of the original story for people who haven't played the game. Or at least, if it was, this is not what was produced.

TWEWY anime is more like one recap episode of a very complex game so that players of the original game could remember key elements of the story before playing the second installment in the game series that was to be released shortly after the runtime of this anime. The problem is that this was not marketed as such,  despite being the obvious purpose and production outcome. This was released with the audience expectation that this anime adaptation represents the experience of playing through this immersive, complex, emotionally revelatory video game, but categorically this is *not* what this is.

This is why the pacing in this anime series is so awful, the stakes seem to be inconsequential because conflict is immediately resolved, entire emotionally complex character arcs that were represented by hours of gameplay occur over the course of a few minutes in the anime, and none of the twists are meaningful because they pan out almost as soon as they're introduced. In an analogy, the TWEWY anime is to the TWEWY game like the X/1999 movie was to the X/1999 manga. In both cases, the story is condensed into a shallow and hurried summary format to the point that it no longer has impact as a self-sufficient narrative that can stand on its own. It's no longer recognizable as even remotely the same experience. Just bullet points in an order that has logical progression as a summary of events.

Just as you wouldn't judge the quality of a series on solely experiencing its intermission recap episode, please don't watch this anime expecting to experience a fully developed series. This was clearly never meant to be such, even if no one told us that this is the case. If you want to watch the anime, I think it's fine to do so, but only after playing the game. Otherwise you might as well just read a spoiler-heavy summary that another player has to give you on their great experience with the game.