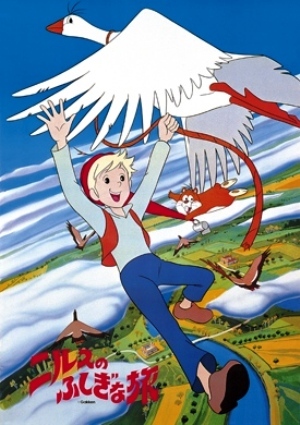 Another series I hadn’t realize it was an anime and not a cartoon, until I found it decades later on anidb. The European setting and the cheery atmosphere deceived me but then I remembered several scenes which were quite scary or violent for a cartoon and I was convinced that... IT’S TOO GRIM TO BE A CARTOON.

ART & SOUND SECTIONS: 6/10
If you still like watching the Smurfs, the visuals and sounds will be no problem for you, as their detail and coloring is around the same level. Most figures are animals and most backgrounds are forests and mountains, so don’t expect any awesomely drawn castles or cities. They are all nicely drawn and without being to detailed, they do their job nicely for a story of this kind.

The story is based on a famous European fairy tale. Nils is a very naughty boy, living in the 17th century Holland. His mischief have angered all his countrymen, including a powerful magical sprite that curses him to become 10 cm small as punishment for his behaviour. Nils also gains the ability to hear what animals say, as a way to know how bad he has mistreated them all these years. He is chased by them, now that he is small fry and escapes on the back of his domestic goose, who dumps his boring life in order to follow a flock of immigrating wild geese. He is in the same time chased around by an avenging fox, who is dead set to not rest until he has eaten Nils and the flock.

The story is indeed ingenious for a kiddy show. Every episode features a different theme:

-Nils’s search for the sprite and a gradual understanding of the world around him, as he slowly learns to be responsible and caring about others.
-His goose’s struggle to learn to survive in the wilderness and to be accepted by the rest of the flock.
-The journey to different settings during the turning of the seasons, and the life circle of the wild animals (immigration, food reserves and mating season).
-Several action scenes with the fox laying traps and constantly chasing them.
-Several horror scenes with cursed towns, supernatural beings and even killer animals.

All characters have something to do in the story and even the secondary ones are adorable. The story has continuity, thematic variety, and even a proper ending with no loose ends. This is indeed a rare phenomenon in the anime world. They still lose some points for being two-dimensional and too cheery.

VALUE & ENJOYMENT SECTIONS: 7/10
One of the better kiddy shows, despite its years. Some should learn from this series and leave aside the crap we see today in cartoons.

VERDICT: 6.5 / 10
A: Hey! Where did all the killings and the sexy women go? Is this even called an anime?
B: Not all anime are like that, you know. Only the mainstream ones.

SUGGESTION LIST
Oyayubi Hime Monogatari. Another children’s adventure about a girl who gets cursed for being naughty.

I grew up with this anime before even knowing what anime was. Even now as a teenager, I really enjoy this series. The characters are amazing, the storyline is good and it got emotional in a lot of episodes. Being the first anime from Pierrot Studio (1980-1981), I think it's a masterpiece. Not to mention how delicious they made the food look in certain episodes! The animation, overall, is also very well done. If you like older animes like Heidi, then you will definitely love Nils Holgersson!

It's a shame that it isn't available to watch online. I would have liked to be able to watch it, but so far I haven't found a website with English subtitles.

STORY A kid who feels no remorse for the tricks he has always played on the farm animals finally faces karma in the form of a tiny mythical creature called a tomte. He catches it and picks on it of course, and earns himself a curse: to be skunk down the tomte size himself! Now his journey of neverending challenges begins as he comes to understand the animals he once cared so little for. On his journeys with the flock of geese he accidentally joined, he'll encounter countless dangers which will help reshape his flawed, selfish personality. The show comes to be full of environmental messages in addition to the ones on moral behavior. Episodes seemed to fluctuate from lighthearted to dire to emotional. I didn't expect a show labeled family-friendly to be as enthralling as this!

ANIMATION It grows on you - trust me I hated some of the geese designs at first too. I must say that I am very impressed they did their research when animating so many different bird species. It's all very naturalistic and accurate for being so cartoonized, from their behavior to flight patterns it was all spot on!

CHARACTERS The cast of this show is large, as to be expected when traveling with an entire flock of geese. But mainly you follow Nils, the once  bullying ragamuffin; Carrot, a hamster that happened to be shrunk with him; and Morten, the farm goose who learned to fly and is who Nils hitchhiked on to get into this mess living with geese. The rest of the flock ranges from stereotypical to annoying, but thankfully that's kept at a minimum. The leader goose is actually very realistic in terms of acting like a true mother would, providing tough love that's crucial for shaping proper children. With each episode Nils's relationships with the geese grow and there's never really a dull moment.

OVERALL A show even a 20 yearold could appreciate and shed a tear to. It's got spectacular messages on morals and the environment all around. It's full of hardships but also pleasant journeys through Europe that relax you in a whole new way. You really know you've peaked as a weeb when you're crying about some 80s geese.