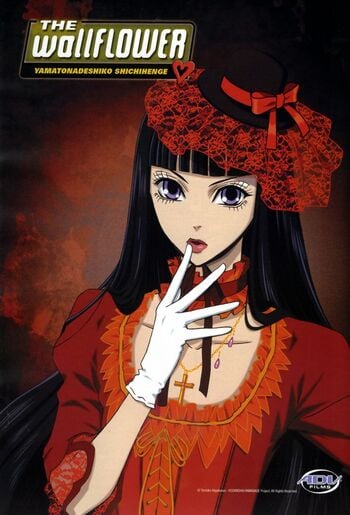 The term yamato nadeshiko implies an unassuming, graceful, submissive young woman – think of it as the “girl-next-door” (or wallflower) of traditional Japan. In our progressive, modern world, shoujo anime seems to be raising a vendetta against this image, grinding out one loud girl after another to shriek their way into the hearts of romance fans. There exist, however, a few specks of color amidst today’s gray mass of brazen, power-hungry female protagonists. One takes the form of Haruhi Fujioka from the seminal Ouran High School Host Club. Another is Tohru Honda from Fruits Basket. The last, and perhaps the most underappreciated, is Sunako Nakahara – the high school pariah of Yamato Nadeshiko Shichi Henge. See, Haruhi and Tohru were at least normal; Sunako, on the other hand, will resonate with what forms the core of most female otaku: the not so normal.

Superficially, it offers nothing more than your typical school-life anime: Filler-oriented plot encompasses a group of friends, who all engage in episodic antics that incites laughs from viewers. While Yamato’s over-the-top humor continually pops up to flash its assets, it frays at the edges as the series progresses. What it has in pure zaniness it lacks in style and intelligence. Yes, Sunako’s volcanic nosebleeds were amusing the first several times, and the boys’ exaggerated “dazzling” features did draw from me a few squeals of delight; there’s no need, however, to have such ploys become stale moves. Add to this the fact that Yamato squanders its shining potential. I mean, how often do we see four drool-worthy bishonen lavishing attention on a socially awkward girl? The foundation is unique and strong, but the actual construction is not; the show manages to stand only by flinging a carefully crafted comedic cover over its relatively weak plot structure.

Critical analysis aside, the show does promise some solid entertainment. Clichéd shoujo tricks are delightfully parodied, and the story does end up evolving, albeit sloppily. More importantly, Yamato holds a direct pertinence over our own lives. Not many of us blush with happiness over dead bodies, or reside in a mansion with the hottest guys in town. Too many of us, though, endure similar insecurities as Sunako: Am I normal? Am I attractive? Do I fit in? Can I make friends? Sometimes it’s just too trite to see yet another social butterfly fill up the screen. We can relish in the fact that Yamato magnifies what brews within practically everyone – and especially within us otaku. It serves as a fun, ridiculous, exaggerated reflection of our own social grappling.

Yamato unleashes its entire animating prowess within the first few episodes; by the twenties, our beloved bishies aren’t quite as beloved or bishy – actually, I’ll go so far to say that they seem to develop into trannies. Clearly, the studio’s budget dried up in the middle of production. As the series progresses, it cannot prevent its stodgy and simplistic animation from bursting from the seams, and we can see with unfortunate lucidity a retrogression in character design quality. For Sunako the animators don't even try, being apparently satisfied with her ubiquitous "diminutive stuffed animal" look.

Where Yamato is a famine to the eyes, it is a feast to the ears. On top of an absolutely stunning performance by Yukiko Takaguchi as Sunako, the boy harem retains their physical deliciousness through voice alone. I was awash in a positive symphony of male sound: Takenaga’s deep, intelligent lilt, Ranmaru’s graceful sultriness, Yuki’s charming, boyish inflections, and Kyouhei’s masculine resonance (with a distinctive “I-want-to-do-things-to-you” undertone) consistently left me in a puddle of aural ecstasy. Musical elements boast a unique ability to gather strength and familiarity with each episode, rather than becoming stale and overused. Perhaps most impressively, sound effects hold a vibrancy and a sometimes disturbing richness that props up the entire show; without such effects, the comedy would wilt. Bottom line: Instead of further deafening your ears at the next scheduled rock concert, stay at home and subject yourself to the pleasing, arousing harmonies of Yamato Nadeshiko Shichi Henge.

The reverse harem anime genre provides plenty of open doors for good characterization. Unfortunately, this show takes a step or two inside a door, shuffles around for a bit, pops out with a small trinket, and then proceeds to shut the door in its own face. At first, I didn’t think Yamato’s characters all that lacking – as forgettable as they were, they still amused me. After happening across three Ouran episodes the other day, however, it dawned on me just how utterly pale Yamato’s male cast seemed in comparison. It is a strange, empty experience when at the end of twenty-five episodes I realize that I know about as much about the inner personalities of these characters as I had in episode one. Revelations, angsty moments, and better-than-average stereotyping? They’re all there. But where on earth is the development?

And I’m sorry, but Sunako is downright creepy. Socially awkward or not, this girl needs to visit a shrink. Period.

The best way I can sum up Yamato Nadeshiko Shichi Henge is to liken it to a handful of sweets: It’s fun to savor and easy to digest, but ultimately unsatisfying. Look up Ouran High School Host Club if you’re searching for a main dish.

Overall, I like this anime. It was humorous without being overly campy.

Story: While at first, the characters seemed set in "pretty boy" and "that one girl" roles, the story allows them to have depth and personality beyond their looks. It goes beyond the main story of making Sunako into a "lady", and that definitely helped the overall feel of the anime. The random "Road to Womanhood" segments were hilarious breaks in the story.

Animation: Besides making the guys a little androgynous, I saw no real fault in the animation. Chibi!Sunako was used a bit much, but it made her appearances as a normal-girl all that more special.

Sound: Had no fault with the sound. Hadn't looked at the voice actors before hand and was thrown off when I heard Vic. (The fact that he appears in at least two animes like this is rather amusing to me: the other being Ouran)

Characters: Like I said, the characters are given depth, and their backstories show the reasons behind some of their particular quirks. My favorite character was Sunako and her ability to make herself a Lady without giving up her prized occult items.

The Wallflower is no doubt a different anime. There are many elements in it that can keep one from continuing the series. Nevertheless when I finally finished watching the 25th episode I was left with a happy feeling.

Note : The Tag is wrong. I would not call this a reverse harem. This anime doesn't even fall in the romance category. "Uncoventional Light Hearted comedy" would probably be a more apt genre I would put this anime in.

The Bad - Terrible animation. Irony is that Sunako (the heroine) is supposed to be ugly and scary looking yet it is the supposedly "handsome" looking men who are an eyesore. Thankfully, chibi forms are used very often which makes the male characters more tolerable to watch.

The Bad - Overuse of "Nosebleeds". It was annoying right from the very first episode. Interestingly, only female characters get nosebleeds in this universe. Also, the nosebleeds are more like a fountain with enough blood loss to technically kill the person on the spot.

It has a number of repititive gags but I never grew bored of it. In fact, the anime itself pokes fun at it towards the later episodes. One of my favourite parts are "The road to becoming a Lady!" cutscenes that pop up from time to time "teaching" you the right thing to do in a comical way. The Goth-Loli (witch?) sisters also grew on me. They are the equivalent of Team Rocket from Pokemon you could say.

It has a number of "shock" moments where things get a little too crazy/gory but the anime is able to quickly recover from these moments and the overall experience while watching this show will be one of a light hearted comedy. (For example: There is a scene where sunako tears into a human and starts feeding on his flesh yet the reaction to this horrifying act is dismissed away with an explanation "She is being weird again". The creepyness wasn't allowed to linger and I found myself laughing at a gag that was thrown at me immediately following it.)

Plot - 4 boys (They look like men and behave like men but they are 15 years old and go to school.....(sigh) Anime......) live in a mansion as tenants and the landlady informs them that if they are able to transform her niece (Sunako) who would be joining them shortly into a "Lady" she will be waiving off their rent. Sunako however, as the boys would discover has forsaken taking care of herself and instead prefers the company of Anatomical Dolls amongst other habits that are "creepy". Having been called "scary" and "ugly" all her life let's just say she has....issues.

There IS a story overall even if the episodes seem unconnected. The last episode does well to emphasise that superficial appearance is not what defines a Lady (This is significant because throughout the show Sunako is called ugly and unladylike.)

Not for everybody but definetly worth giving the show a shot.

Story: This one was pretty good a little different from others, the story was good but I wish that they show more of Sunako NAKAHARA becoming a lady then just messing around or at least show her having feelings for Kyohei TAKANO more but besides that realy fun and great to watch this show is a must see

Animation: the animation was not that bad, but for me i had to get used to all there lips no homo here it was just a little off if you no what a mean

Sound: spot on with the sound

Characters: Funny as hell all for boys where just the best and Sunako NAKAHARA dam she is my girl the way she act's and how the voice actor did her character what a blast 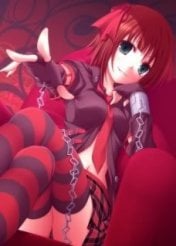 Yeah, I have to say this is my favourite anime afterall so... :)

The story was awesome. I can't imagine a better story at this cathegory. It' has a lot of action, a bit drama a whisper of romantice and etc. And the best in this story: The end is really good. At the anime's world the good end is rare. Because they don't know how to contiue or end a story sometimes. 10/10

Yes, this part is a bit hard caue when I first saw this drawing, I just laughed and asked: Omg what is this? A korean anime or what?---because its really looked like that back then. But when I watched more episodes and this anime again and again I have to say: This drawing really fits this anime. 9/10

The songs were cool. The opening is excellent. Its a typical type of "two answer OP/ED" You love it or hate. (It is for you to decide-Enma Ai (xDD) ) The first ending was a bit sad and lonely and etc. The OST was cool, its fits the anime. 9/10

I don't have much to say. I love them, especially Sunako Nakahara. (She is my twin sister btw, she has the same personality as mine) The "bishounens" were really cool with that drawing, they always pulled out her from the problems. I love them. Really daisuki <3 10/10