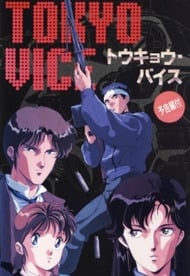 Akira, Junpei, Keiko and Kumiko are members of the Rutz Detective Agency, and are always ready for a good case. When a mysterious murder places a top secret floppy disk in the hands of Junpei, the gang suddenly has a conspiracy on their hands of grandiose proportions. Not only have they made an enemy of politicians and shady characters, but also the munitions manufacturer company Yotsuboshi itself! With murder attempts, rampaging machinery and kidnappers to handle, the group must race against the clock to foil the evil scheme before it's too late!

910 users are tracking this. Log in to see stats.

StoryThe storyline of Tokyo Project is fairly convoluted at best, and wasn't always entirely clear as to what was going on. Essentially, Akira, Junpei and two females make up a detective agency, though this isn't apparantly clear. Junpei doubles as a rock star, and witnesses a man dying. He hands over a disk, and thus the troubles of the four begins. The disk, it seems, contains top secret information about a weapon, as well as other things. This information would point a finger at politicians and an influential company, which means the target of their guns are none other than the four themselves! Genre-wise, Tokyo Project sometimes seems to be a sci-fi thriller, and sometimes just a generic action-filled investigation type show. I really enjoyed the parts that were seemingly based on sci-fi, with the giant robot and all the computer hacking. Other than that, while it wasn't a bad story, there was nothing exciting about it and it seemed very generic. While watching, I kept thinking "I swear, I've seen so many series like this", but couldn't remember the names. The length (50 minutes), as well, contributes to the confusion and lack of depth with plot and characters, which doesn't help the story score either. It also doesn't help that there are some seemingly absurd things that happen, such as Junpei getting up and going to help the others after being in a terrible accident on his bike. In real life, not only would the patient not be able to escape so easily, but he'd probably be in TOO MUCH PAIN TO RUN AWAY. AnimationThe animation in Tokyo Project is definitely its strongest point, but still ends up being nothing exceptional. Backgrounds were detailed at times, especially with the robots and machinery. Characters look very much like they did in the early 90s, with different shaped eyes (a peeve of mine), some vertically oval and huge, some small and round. The color scheme was quite dark and neutral the entire time, mostly browns and blues. Explosions and other special effects seemed decent, but again, nothing special. The animation in general was crisp and clean, so I feel obligated to give it a moderately decent score. But if you want eye candy, don't pick this one up in hope. SoundLooking for wailing buttrock that makes you want to grow your hair out and wear tight jeans? Look no further, for Tokyo Project exists. It reminded me of The Enemy's the Pirates, to be honest, with how excessive the hair metal was all the time. Super cheesy and super terrible made the music laughable, but still fit the tone of the series decently. I do think that it could have been a little more mellow some of the time, hence the somewhat lower score. Voice acting seemed just fine for everyone involved.CharactersThe characters definitely were not a strong point of Tokyo Project by any means. The length contributed to this, but the overall tone and focus of the OVA was the true culprit. We had no idea who anyone was, really, and to be honest, even the basic information such as that they all belonged to a detective agency, wasn't clear at all. We see no one's past, no development, and nothing else of note. It truly is an action flick, hands down. Now, nothing happens that should make us emotional in the first place towards the characters, which is good since it wouldn't have worked anyways. For the most part, the characters did fit their very shaky roles decently, but there just wasn't enough there for me. OverallTokyo Project is a mediocre anime that will probably only amuse those that really like short action-filled detective shows. There is nothing blatantly bad about the OVA (well, except the lack of character development), but it still falls short as being something unique and original which would warrant a good watch. So, if you fit the person I described above, check this out for a short watch. Else, choose something else, I'd say.

GOD series no.1 (Good ol’ days) Man, you have to love 80s anime. Like, you know what, I feel like I wanna tell a story bro. Ok, is it like a dope idea? No, it’s just a story. Oh, does it have like a great selling point? Mm… nah it’s just a story bro. Oh… so is it short like a 90 mins movie or long like 26 episodes? Meh… like… 45 mins 50 mins tops. Hmm… fuck it, lets do this. So that’s probably about how this OVA came to be. Story, is it good? Meh, it’s alright, just some youngsters that run a private investigating office that got involved in a bad case. Right before a person died, he gave a FLOPPY DISK (fuck me I’m old) to the young investigator (who just happened to be there I assume) and they get involved in a case that they shouldn’t cause a major company and some politicians or some shit would be exposed for researching the creation of a military weapon. I’m not gonna say much cause it’s just 50 mins, not gonna spoil the whole god damn thing, but you can expect the old school nonsensical greatness, you know, MC almost dies in a bicycle crash, probably broke every single bone in his body, the next day he just wakes up and goes to invade enemy territory, fights like a madman and then he walks out alive from an explosion that should probably incinerate every cell of his body. What a lad. You know, casual old school greatness. Characters ain’t much of course, no time for development or actual fleshing out, but still, they are alright. They are likeable, they are cool, they do the job, and they are treated like actual characters, even though this OVA is a one time thing, you get the feeling that they exist outside of it. That they have a past filled with maybe a similar case, and a future that beholds many more to come. Animation is pretty alright for its time, and you know, pretty alright for its time is still miles better that the average today’s animation. The color palette works great and gets the feeling of the show right. Sound is f i r e. Don’t get me wrong it's not my kind of music, but its fire, it’s what you expect from the era, it goes great with what’s going on, it is splendid. Voice acting is whatever, it’s not terrible or anything but it could have been better. So, is it worth a watch? It is nothing spectacular but fuck yeah it is worth a watch. 50 minutes! 50 minutes and you probably get more than what you get from half of today’s average seasonal anime. A story with a beginning and end, some cool action, fine animation, good music. So yeah, if you have like 50 mins of spare time, you can probably do something better than watching this, but certainly you can do a lot worse.