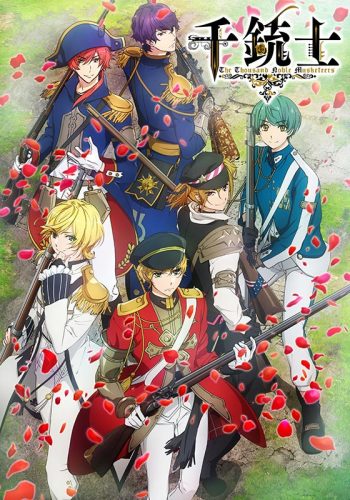 In the year 2205, the past becomes threatened by the historical revisionists who seek to change it. Protecting history becomes the task of a boisterous band of swords that are brought to life, including the glamorous Kashu Kiyomitsu and the kindly Yamatonokami Yasusada. Beyond their battles, these legendary swords from different eras lead charming daily lives.

The characters of both anime are the incarnation of famous historical weapons, and both follow a basic premise of sending small groups from a seemingly endless character roster off on missions.

as someone else sort of said, these two shows are the ultimate bishounen showcases. add to that the element of personifying weapons. one brings to mind the other.

Azur Lane, a combination of all the different Camps in the world, was once successful in repelling the underwater menace, the Siren. Now splintered, they must face a new threat in Red Axis, former allies who crave to wield this otherworldly Siren technology for their own nefarious desires! Who will be victorious in the never-ending war between these battleship girls!?

In a world of sword and sorcery a century, after King Kairu of Orvelia defeated the demon king Angumundo, the squire Kasel lives in these peaceful times. However, Kasel's destiny is set in motion when he hears of the demons reappearing on his land. Guided by a great wise man, Kasel embarks on an adventure with his companions to drive back the darkness threatening his once peaceful land and become the Chosen Warrior of the Holy Sword Aea.

On a certain island where Halloween festivities are in full swing. Djeeta and the others find themselves in a village adorned with jack-o'-lanterns. They enjoy the bustle of the streets, which are lined with stalls selling candy. As Djeeta and the others continue exploring the village, they hear rumors about a boy who's been missing since the morning...

The battle between America's elite military force against the ruthless and power hungry terrorist organization COBRA enters a new chapter. A new covert team of Joes, SIGMA 6, has been created to hunt down COBRA and stop each and every one of their insidious plots for world domination.

After the Divine Gate opened, our world and the worlds beyond became connected, bringing an era of chaos. To restore order, the World Council was formed and theDivine Gate fell into legend. Now, a select few have gathered to attempt to reach the Gate and remake the world. But what will they find when they open the door?