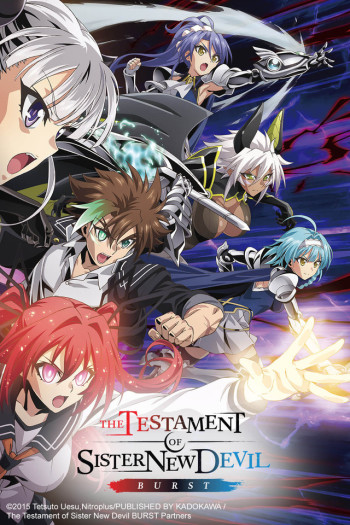 You should know exactly what to expect based off season 1 and there isn't tons more to say that my Review for Season 1 hasn't covered. There is a major difference though and that is that there is more of a story. The starting is kind of slow and boring but it it gets interesting around halfway through as the focus is on Mio and the demon realm. This also shifts the focus from constant scenes of forced sexual content to an action theme heavily aimed at fighting as the episodes progress. Once the time came for this, it longer felt like an anime that was all about the sexual content that it so frequently relied on, but more like an anime with a story that didn't have its mind on sex as a priority.

The rest is the same formula as Season 1 so refer to the link below. There are some additional characters from the demon realm, but not really significant to be worth mentioning. I would also say there are slightly better looking visuals. and that the music was great, at least during all the action scenes.

Watch this if you liked the first season as I would say it is a bit better, avoid if you did not like it, or just skip to episode 7/8 for the heavy action episodes.

the story has so much potential. they should make more of this.. so many ways for the story to evolve. One of my best anime.

my reviews are straightforward. I watch anime to escape and if a series give that feeling then the overall rating of that series to me is at least 7/10. This anime does that and more. the other thing that affects my review is how many times can I watch the series and I can still escape and not be bored

Animation and sound problem are not really important to me. The storyline and the character development are excellent, that is all I care about.

It's true that story could've been done in many other way, although i liked it this way too.
Overall i really enjoyed it and i could watch it again without a problem.

Welp. That’s the end of that. Kind of.

Story: Same as the previous season. Same ending as the first season. Same MC motivation. It was a repeat of the first season, which left me dissatisfied since I wanted a fitting conclusion. Sure we get 3 new harem assets, but the generic villains and really really shounen aftertaste of this shit didn’t go down well. Im also confused on WTF is happening half the time.

Sound: Good intro. If u listen close u would know there’s three different versions of the intro(at least). All fye. The sound effects in the opening scene. Not a banger. At all.

Characters: Only develoment is to the harem. That sounds godly for a harem anime. But the character motivation (when it’s attempted and Basara isn’t sucking Mio’s tits) is lackluster. The villains are flat and not particularly intersting. As you’ll see in the end.

I know a lot of people didn't care for this but personally I thought the story and characters made up for it. I'm really hoping for a third season.