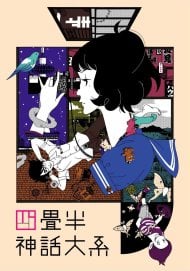 A man is miserable. Despite all his dreams of a “Rose-Colored Campus Life” filled with raven-haired maidens who dote on him, his social life is going nowhere. He has no girlfriend, his only good friend keeps getting him into trouble, and the circle he joined brings him no joy. So he tries again, and again, reliving his first two years of college life ad nauseum, making different decisions each time, having no recollection that he’s already done this all before. Will the man ever be satisfied with how his life turns out?

The Tatami Galaxy should have been a movie. That's my criticism in a nutshell. While I was watching Yojouhan Shinwa Taikei, I was struck by the feeling that it didn't quite feel like an anime. I don't mean that because it wasn't filled with accidental groping and meaningless drama born from misunderstandings, or even that its art style wasn't generic sparkly eye bullshit. What I realized in the final episode was that Tatami Galaxy didn't feel like an Anime Show, but rather felt like an Anime Movie in every aspect. The themes, the subject matter, the presentation, the art, the narrative, the execution all scream "Movie" and it would have been much better off had it been so. Pretty much every gripe I have with the show has to do with its length. The story and message aren't particularly deep or complex, or even unique, and so there's no need for it to have an 11 episode runtime to examine it. I've seen this premise before, many times. Groundhog day with the twist that the participant is not fully aware of the loop. It's Endless 8. It's not like anything new is being said here. I don't think it's possible to make it all the way to the end of Tatami Galaxy and not end up liking it, but I had to suffer through 5 episodes of boredom before the story became engaging. That's a big crime to me. The show would have been much improved if several episodes, perhaps around 6 or 7 were cut entirely. Another problem with length is that the characters are never very fleshed out, despite the screen time they're given. Like the Endless 8, the first several episodes are the exact same events and circumstances happening under different settings. What I would have expected, and what would have alleviated much of the boredom is if we got to see the characters from different angles through the repeats. If through each repeat a new side of a character was revealed. As it was, we see the same characters presented in pretty much exactly the same way every time. Once we learn the secrets behind Jougasaki, we know everything there is to know about him. We see Akashi in every single episode, and learn practically nothing about her. Nothing that we didn't know from our first encounter with her. The same scenes play over and over and nothing is learned, nothing changes. The show never explained anything to do with the time warp, or the maze of rooms. Why is this happening, how is it happening? Maybe I don't need to know, but what about "The Master" acting the god of love? Was that real? he never makes any further allusions to it past the first episode. It's almost like they forgot they did that and made him into a normal character. Where the show really hits its stride is around the episode where our main character chooses the doll to be his love. Incredibly interesting and surreal to see his psychology break down, this is one of the show's high water marks. From there the rest of the show deviates drastically from the formulaic episodes before it. Even if our protagonist ends up in the same position with the same people because of the same person, the journey is unpredictable and an enjoyable ride. If the show had been like this from the beginning, it would be one of my all time favorite shows. Entertainment is meant to be that, entertainment. It can make you sad, it can make you tense, it can make you excited. If it makes you bored, it has failed. For nearly half the show, I was bored with Tatami Galaxy. However, the show picked up, and the ending was fantastic. The second to last episode is one of the most interesting, engaging, and entertaining episodes of anime I've ever watched. The visual style is certainly avant-garde, and that might score too many points with some people, but to me, it's just decoration. Tatami Galaxy could have been much better. It's flawed, and more than it needed to be. The runtime could have been cut down drastically, to movie length, or the characters could have been fleshed out more. Despite these complaints Yojouhan Shinwa Taikei is a good show. 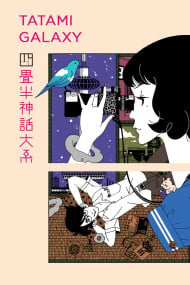 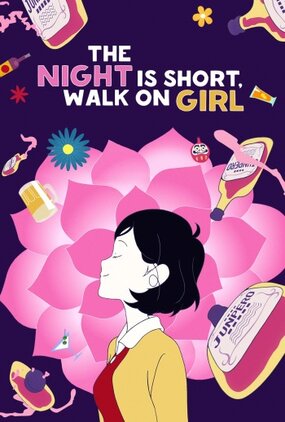 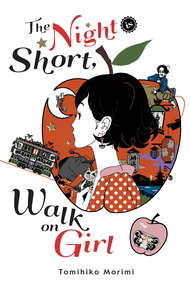 The Night Is Short, Walk On Girl (Novel)