The Star of Cottonland - Reviews 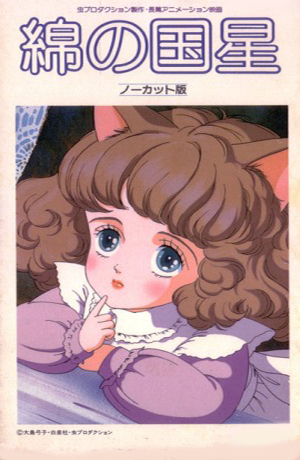 Although moe was defined in the early 21st century and quickly turned to a pandemic, that does not mean there weren’t earlier localized flu cases. Such is the case of this movie, which I much point out it is not a travesty like modern moe. It is highly symbolic and meaningful, used mostly as means to tell a story and not to attract 2D pedophiles. That is why retro always wins; it is more sophisticated and doesn’t lick your feet in an undignified attempt to attract your attention.

The story of the movie is basically a coming of age tale of a kitten. But not a normal kitten but one who thinks is human, or can turn to if she tries a lot to act as one. That is why all the cats are depicted as humans with animal features (not just anthropomorphic). It is both because that is how she perceives the world, as well as means for the viewer to identify with her by presenting her problem in human standards. That is exactly what makes this film quality material; she is not cute looking just for the sake of selling more to the public. She just imagines herself as a pretty girl when in reality she is just a kitten. Wow, this is like the Matrix! There is no cute girl, in the same way there is no spoon.

Anyways, the story is a simple one in terms of plot but very interesting in terms of symbolisms and life lessons. The kitten loves her male caretaker and wants to become human just so she can be with him forever. Plus, the trope “A cat is fine too” wasn’t yet invented, so she couldn’t result to that option. Retro ftw, they lacked the crap some made along the way. Anyways, as silly as it sounds to have a cat wanting to be a human, it is excused in the context of the story. Think of it like a more realistic version of Pinocchio. And by realistic, I mean there is no magic in the movie and everything weird is just her imagining it as such. Wow, reality fades before my eyes! This movie is awesome!

Anyways, even if you see it as a simple slice of life show it is still a good one. You clearly see how she is learning new things along the way by first mimicking the lifestyle of humans (which is quite troublesome) and later she leaves home to let him go on with his life with a real girlfriend as well as to learn from other cats how to act as one and survive on her own. It sounds simple but it is also not completely cheery either; there is even death in here!

The animation style is gorgeous for its era; they spared no money to make the animation as fluent as possible a non-Ghibli film can be. There is enough detail given to backgrounds and human figures as well, with the heroine stealing the show with her innocent gimmicks and naive impression for everything. If you are a cat-person like me, you will adore her. If you dislike the sexualization of underage girls, you will adore her even more, since the movie DOES NOT DO IT! Retro ftw.

Voice acting and soundtrack are a lot less ear-catchy, not that they needed to be for such a story. It’s just that they are not special in any way. They are low-toned and simple sounding.

The movie is practically forgotten today and chances are it won’t have replayability for most but it sure is very entertaining for its kind (and era) and I highly recommend it to retro lovers and sick-moe-haters. And if you want something more modern as an alternative, try Chi’s Sweet Home. It pretty much has the same idea but it is far less “smart” because it is not retro (lol).

ENJOYMENT SECTION: 8/10
Simple, cute, and smart at the same time.

What I Liked: The lucious yet wistful theme song. Sound design and soundtrack are both perfect, cute and playful when they need to be, and the insert songs aren't too intrusive. The insert song "Tori wa Tori ni". Chibi-neko and Raphael's designs are lovely, and the whole "cats look like humans to themselves, but look like cats to humans" thing was an interesting choice. All the different little plot points, such as Tokio's guilt and the search for Persia, that seem to be as wandering as Chibi-neko herself.

What I Didn't: Tokio's mum can seem abrasive and hysterical (a by-product of the time, maybe) and Raphael can come off as a little creepy. It’s rather slow paced, even for a 90min movie. YMMV on the second half, it does feel like it meanders a bit.

Final Verdict: Simple but adorably whimsical, Star of Cottonland is a delightful family-friendly film that's just as worthy of praise as any Ghibli or Pixar film. Sure, the plot begins to wander in the second half much like the protagonist herself and Tokio's mother can be unrealistically eccentric, but this doesn't stop this movie from being a lovely way to spend 90 minutes.