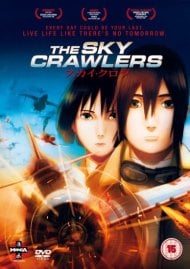 In a world where corporations snuff out the competition by sending fighter jets to attack their offices, teenage pilot Kannami Yuichi is reassigned to a new base. There, he meets Tokino, a carefree pilot who enjoys the company of older women, and Kasanagi Suito, his superior officer who he slowly falls for. However, not everything is as it seems. Soon, distressing questions are raised about Kannami's predecessor, a race of perpetual adolescents known as the Kildren, and the enemy ace of the skies, Teacher.

StorySky Crawlers takes off with a stunning action sequence; two fighter pilots engage in a dogfight as speeding bullets rip an aircraft's backside. Don't let the dramatized trailers fool you, this film is anything but a adrenaline-pumping thriller. On the contrary, many will find Sky Crawlers snooze-worthy due to its sluggish pacing and introspective plotline. Indeed, the movie's melancholic tone and bleak, listless characters will leave some confused or bored stiff. With that said, I loved this film. Sky Crawlers doesn't subscribe to the tried and true formula of entertainment we expect as viewers. It's decidedly slow and it refuses to spoon-feed its themes to the hungry anime masses. Instead, much of the movie's meaning lies beneath the surface of its dialogue, revealed through the actions and unspoken thoughts of its characters. Pilots drink and smoke like fiends, indicative of their apathy for their own health - a moot point when one hangs on the edge of death. From the start, we aren't privy to the information surrounding our protagonist or the endless war he fights, lending an air of mystery to the narrative. Events unfold aimlessly in the first half, and long periods of dreary silence dominate in between battles. However, by the film’s powerful conclusion, the details are slowly pieced together and Mamoru Oshii's message lingers long after. Some take Sky Crawlers as social commentary on the nature of war and peace, and the philosophical questions it poses are debatable. The more palpable theme, I would argue, would be the loss of innocence. Pilots, or "Kildren", are perpetually young and immortal unless physically killed; they're disturbingly anchored in adulthood through war, sex, and violence. When Commander Kusanagi is labeled "immature", symptomatic of being a child, Yuichi counters, "for people who might die tomorrow, do they have any need to grow up?". Neither children nor adults, these pilots are stuck in an eternal limbo, one in which all hope of change has been abandoned. The anime questions this growing culture of jaded youth, and in turn, boldly asserts that we do something about it. Fortunately, Sky Crawlers isn’t simply a film about war, but rather, a film about humanity. After the devastating (yet rewarding) conclusion, I could easily forgive the dull, meandering first half. If anything, the lack of a concrete timeline enforces the anime’s overarching message. However, clocking in at two full hours, the movie could trim some of the fat; several long, drawn-out silences and superfluous scenes eat up the time. Not to mention, there's an unceremonious info dump towards the three-quarters mark. That said, watching Sky Crawlers is like peeling a tough fruit; if you have the time and patience to shed the layered skin, you’ll reach the meaty core.Animation99.9% of the time, CGI in anime sucks. The awkward overlap of 2D objects over 3D backgrounds never ceases to make animators look lazy. Sky Crawlers is a noteworthy exception. Production I.G. rendered each exhilarating aerial bout in CGI, and the result looks fantastic. Planes don’t just explode; their tails are ripped apart, engines are blown to smithereens, and smoke trails slash the cloudy skies. At its best, Sky Crawlers' animation looks photorealistic. At its worst, the 2D-3D overlap lasts for a couple of seconds. Purists would ask for hand drawn dogfights, but frankly, the CGI doesn't take away from the overall experience. The art is stylistically bleak, oppressive, and drained of all color - think Pale Cocoon. Character designs are straight-laced, and for the most part, motions are fluid. The muted color palette suits the cynical atmosphere of the anime, never overpowering the main focus of Sky Crawlers: the story.SoundInstead of using standard seiyuus, Oshii acquired live-action actors such as Rinko Kikuchi (Babel) as Commander Kusanagi, and Ryo Kase (Letters from Iwo Jima) as Yuichi Kannami. I was impressed with Kikuchi’s brilliant portrayal of the cold, professional Kusanagi; her voice projects a sense of desperation and pain that suggests the flawed world of the Kildren. On the soundtrack side of things, nothing is strikingly remarkable; music is sparsely used and only one orchestrated motif is memorable. For a better score by Kenji Kawai, see Seirei no Moribito or Oshii’s seminal Ghost in the Shell.CharactersDo you like the taste of vanilla? Well that’s exactly the flavor of Sky Crawlers' characters. They are essentially blank slates with little to no personality or growth. And yet I felt sympathy for them, only because they were pawns in a much larger game. Unlike mainstream movies, Sky Crawlers' story drives its characters, not the other way around. The lack of three-dimensional personalities may hurt the plot more than help it, but depending on your reaction to the story, you'll either sympathize with the protagonists' plight or not care about them entirely. Kusanagi is the only memorable individual, solely because there is more to her than meets the eye. We start to see the chips in her cold armor as she grows intimate with Yuichi, whittling herself down to a self-destructive, emotionally bankrupt person. She is as perfectly capable as she is flawed and fragile. Although I didn't connect with her character, I pitied her numb existence; trapped in a static world, Kusanagi's reality bars her from experiencing humanity.OverallThose looking for light entertainment should steer clear; Sky Crawlers is a dense, moody film that's best when not taken at face value. Some will likely fall asleep from the ambiguity; others will be intrigued by the mysterious atmosphere, long enough to engage with the surprisingly profound plot. The snail-like pacing and flat characters make this movie a hard sell for any anime fan, but for those in search of food for thought, Sky Crawlers may prove to be a welcome feast.

The Sky Crawlers is amazing in its themes but damn boring in its presentation. Although one could say the same thing about all of Mamoru Oshii’s films. Whatever, I only liked his Ghost in the Shell movie and only because I had already read the manga. So the movie is about a war sponsored by countries, only for the purposes of keeping the populace at bay. The concept is interesting, few people keep on fighting with airplanes, the whole thing is filmed and broadcasted by companies, and the people look at fear and dread at the futility of death and destruction. Without that, they wouldn’t appreciate their peace and the tension between the nations would be far edgier. At the same time, the pilots who fight and die for this purpose are not normal people. They are specially created and bred to be emotionless and following orders. After all, their single reason for existing is fighting and dying in the name of piece. Sounds weird but the human psyche is based on an equilibrium of duality.So yes, the story is very interesting. The whole thing is seen through the eyes of the protagonist, one of the pilots, and all exposition of the specifics is done through dialogues… which is also the downfall of the film. THERE IS TO MUCH TALKING AND TOO LITTLE ACTION. Which is the director’s trademark, along with that silly dog he loves to show in all his movies. I believe in what they say about the first rule of scenario-writing. SHOW; DON’T TELL. Yes, the story is great but being described like a dull monologue is not helping much. Neither does the emo style of the characters; everybody is way too emotionless and sad. Which is excused in the context of the movie but still doesn’t look appealing to the average viewer. Or me. It all looked much better in the Ghost in the Shell movie, because everybody there was already overtaken by technology and was supposed to be somewhat robotic. Over here the feeling is not sitting well. Heck, the world still feels like it’s still in the industrialization period and there are cottages and rural areas everywhere. I admit that the director did a wonderful job at showing how the protagonist lives and DOESN’T feel. He even made him an exception to the rule by having him questioning his purpose in life. He even included a possible romance, a sub story about the opposing pilot’s identity, even the probability of him being constantly cloned every time he dies. We never get a clear explanation about all that yet they are there as food for the mind. Not bad but not great at the same time. The whole thing is based on some sci-fi book and the movie shows very little of the whole world described there. The lack of explaining ends up being another minus, as the average viewer is not allowed to immerge in this most unorthodox setting and instead is shown lots of characters that have gone through a lot out of screen. Not a good thing if you want the audience to like your characters and world. Beyond all that, the production values are very good, feeling like a blend of old (the style of the dog-fights) with new (the covering of the events by the media). The thing is, the character figures don’t feel too uniformed with the backgrounds. Meaning, while the airplanes and the buildings are CGI, the characters are drawn in a rather simple 2D style and thrown in the foreground, making the antithesis too obvious. And as I said the emo expressions don’t help. This is hardly one of studio I.G.’s better works. In all, The Sky Crawlers try to show too much and only end up telling too little. Just like the Ghost in the Shell movie, you are supposed to have read the background story prior to the movie, which is a weak excuse for not showing it on screen, or throwing the viewer to stare at things he doesn’t understand and spend most of the duration looking at emo caricatures piloting sleek retro airplanes. The whole thing was better of as a mini series or a movie trilogy. As it stands it is nothing but an interesting concept with a vague and boring presentation.

it is a movie you have to watch more than once to fully understand what is going in in this world... still F***ing amazing. 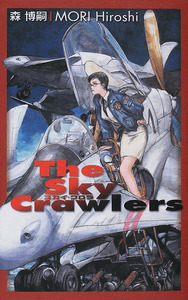