The Seven Deadly Sins: Imperial Wrath of the Gods - Recommendations 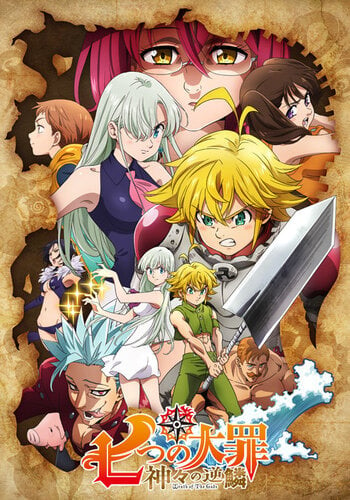 If you're looking for anime similar to The Seven Deadly Sins: Imperial Wrath of the Gods, you might like these titles.

Both have are comedy adventures set in a fantasy world with strong main characters, similar art style, talking pets that accompany their journey.

Similar vibe, has over powered main characters who are fighting a battle against evil, but just can't stop being misunderstood. Fairy Tail involves the power of friendship and how that sometimes is the most important t thing in the world. Seven Deadly Sins is much the same way, but it also involves the power of love. Both have time spanning friendships and romance connecting the characters. Fairy Tail is decidedly less ecchi, as Seven Deadly Sins' hero constantly has his head up the female lead's skirt, so I think Fairy Tail is slightly more suitable for kids.

Both are fun fantasy anime that have a mix of story and light-heartedness. Aslo, several of the dub voice actors are shared between the two, so newer fans will appreciate watching both of them

Both of these start with the female lead taking a journey (for different reasons) meeting up with the male lead. Also has magic and they work together to try to protect the people they're closest to.

Both are filled with magic users, although somewhat different.

The characters are interesting and and make you fall in love with them.

Finally, the main reason, both of these are just awesome.

Both movies are great! I myself am a big fan of The Seven Deadly Sins, and I watched both the movie and TV shows over 100 time! So much of my life wasted infront of a screen haha.

they have the same characters its just like a special episode or a spinoff. gives some good backstory on hawk's mum

It's literally the same thing, same characters but I different plotline, it's also the same genre and stuff. Super good, definitely recommend.

Its the same anime and features many of the same kind of themes- action packed, however animation can be a little eh.

The Seven Deadly Sins: Revival of The Commandments OVA

While Hawk takes advantage of Merlin's magical items and uses them to fight Howzer, Princess Veronica works hard on her training with Guila. Meanwhile, King spends time in the Fairy King's Forest before joining the other Sins for a trip to the beach.