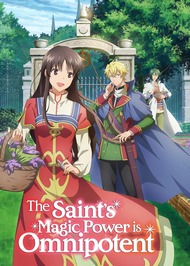 Sei is a 20-year-old office worker. Tired from the never ending routine, she hardly has enough time for herself. Day after day, never-ending work, however, one day she is summoned to a whole new world, which she, as a saint, is supposed to free from darkness. Unfortunately, for our main heroine, the ritual failed and produced two saints, instead of one. The second saint that is summoned with Sei is also a girl from Sei’s world, but to the understanding of outlanders, a much cuter one than Sei. Which, of course, leaves her neglected, everyone forgets about her and Sei just lives at the royal place, making potions and enjoying her new life as a saint.  Sometimes I am starting to hate myself for reading the source material first, because I always end up being salty. Anyways, The Saint's Magic Power is Omnipotent, like many anime from this season, decided to change a few things about the source material. For example, the way the story is told (in the novel we see the world of The Saint's Magic Power is Omnipotent from Sei’s perspective only) and the anime, of course, is more rushed than the novel, which also makes me ask myself a few questions about a thing, or two. Anyways, it is still somewhat faithful to the source material and is not that bad of an adaptation, I must confess. Seijo no Maryoku wa Bannou Desu is just like any isekai, where the main protagonist is surrounded by many people, but here the main protagonist is a girl that is surrounded by a ton of men. So, it is a harem, but for girls. In addition to that, unlike many isekai, here hardly anything happens. And this is exactly what I mean: no super powers, no drama; nothing. It is just a no stress isekai with a huge focus on the slice of life part. Honestly, that it about it, so be ready for it. With that being said, if you want to see a no-stress isekai, this is a perfect watch. As for me, honestly, I was hoping for some more drama and perhaps a tiny bit of fights. What I mean is that, for me, a saint, or a hero is supposed to, I do not know, fight sometimes? They could have added a bit of spice to it, this way this show would have been great. But, for me, it is a very solid 7/10.

It seems a lot of people really didn't like saint magic power, and I'm right there with them. So yes it is a slice of life, romance, fantasy isekai yes that is a mouthful and that is really all it is. And most people were probably expecting more. But it has the same that each of those genres have just bundled in to one package. Is it bad? No but it probably shouldn't be on the any urgent want to watch list. Still give it the 3/4 epsiode try and if you really like where it's going the stick with it if your a bit indifferent or worse  then just drop it there's really no wow factor here.  I'll do a short detailed review for the more curious, spoiler free for those allergic to spoilers first the animation is pretty solid and consistent, but again shows in general have gotten way better since 2020 so it feels hard to choose higher or lower. It's still quality though  Next is the sound which is same old same old generic sound and the occasional bird chirp nothing stands out.  for the characters this is where a major issue stems from, we have for the most part some really interesting characters with good backstorys and compelling scenes but then they blow it away and push it under the rug so they can focus on cliches girl gets WAY to nervous around guy love interest. She's a grown ass woman getting nervous like a teenager with her first crush. It was a huge hamper. finally the story there really wasn't any it was a slice of life but its a isekai fantasy abliet with a generic magic system but it's at least tries to show it but it's and is void of ANY story propellant after I think episode 6 it's just becomes saint+love interest and friends. And also the romance thing goes absolutely no where (shocker)  So stuffing this saint into a box and forgetting about I'd have to say it's another example of a show that could've been better but does nothing and in a bad way. For those who are bored then sure give it a watch but otherswise I would just skip it it's not worth the time well that was longer than expected but hey if you made it this far thanks for the read and have a good day!

I loved every second of it despite many people that probably didn't like it I for sure was excited to see every new episode it was awsome now idk what to watch cause I'll miss this weekly anime. 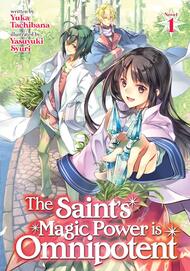 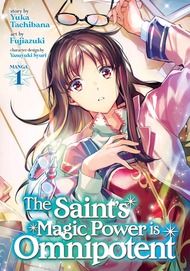