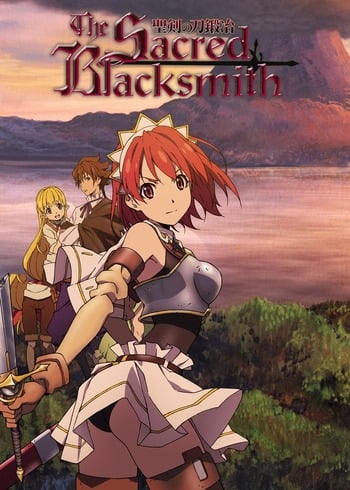 The Sacred Blacksmith is a generic fantasy take regarding the adventures of Cecily, a girl who is supposed to be a knight but is otherwise dressed like a maid with a breastplate made to look like… well, breasts. Ten minutes into the first episode and it is already established trice that her fighting skills suck and she is in constant need of some uncaring pretty boy to be appearing out of nowhere and saving her with his awesome sword in the last second. Said pretty boy is named Luke. He is very good at crafting swords; thus he can slice in half other common weapons just because his works are quality material. He is also living together with a loli elf which can imbue his sword with extra powers in case conventional methods don’t work. Said loli elf is fascinated with boobs and never misses to mention how it would also want to have gigantic ones instead of a flat chest. Sadly for her later on a whore with another pair of watermelons appears and her jealousy grows even more. There is also some sort of a world threat regarding a demon who wants to destroy the world and turns people to monsters but you will barely notice it because every five minutes you will be getting some boob joke, Luke getting a nosebleed, and Cecily hitting him for that. Hooray for priorities. I understand that Japan has its own way of animating the fantasy genre but they never managed to produce a single well-made epic fantasy anime in their entire history. The closest ones to the “rather good” status still are Record of Lodoss War, followed by Guin Saga. All the rest are nothing but goofball comedies and ecchis, or horribly low-budgeted Middle-Earth imitations. This belong in the former category and all you are offered is an uninspired premise, a generic setting, awful cheery pop songs that are completely off with the genre, and lots of done-to-death softporn jokes that are completely out of fashion after we were plagued with four seasons of Queen’s Blade. The funny thing is, many people expected something good out of this show because it was animated by Manglobe. I have no idea why that is proof of anything since they have made a couple of great shows and a bunch of mediocrities. This one is in fact their worst job yet, both in production values (which are average to bad) and context (which doesn’t exist). The director or the writer didn’t produce anything significant in their whole careers either, so again you have nothing to expect. Even if you try to view this show as a silly comedy in a fantasy setting, it is still bad, since it is hardly as funny or exciting as similar shows from almost two decades ago, such as Slayers and Mahoujin Guruguru. If you want a more specific reason of why it is so bad, all you have to do is to separate the anime into the background part and the foreground part. - The background part is good in terms of creating a generic but otherwise interesting setting. The sceneries are very detailed and indeed make you feel they are part of a medieval world. The BGM is indeed made to sound like it’s a fantasy/action show. The backdrop story is indeed made to appear as the classic tale of a demon trying to take over the world and releasing demons everywhere, while a band of brave adventurers sets out to stop him. These are all very good and dandy. - The foreground part where all the plot and action takes place is a complete mess. The characters are all drawn in a most generic and boring way, with too much focus on boobs, plus their personalities are simple and lack any interesting or meaningful development. The intro and outro songs are completely trash material, full of cheery squeaking singers. The dialogues are all full of retarded softporn jokes and juvenile talking about friendship and compassion. Voice acting is nothing much because of the lack of seriousness that would require from them to sound any better, plus the few loli characters have that annoying pinch in voice I hate so much. The plot is to the most part aimless strolling around with lots of dead time and ecchi moments, plus there are cases where the characters make some really out-of-character decisions, plus the ending is left open. These are all bellow average material. Down to it, this is a terrible anime and I don’t recommend it not even as a time waster. It will forever be known only as Sacred Boobsmith, the worst show made by Manglobe.

Introduction- The Sacred Blacksmith is a relatively short series set in a standard fantasy/medieval setting. Cecily Cambell, the main character, is the daughter of a famous knight and holds the same profession as her father. Throughout the series she works to protect the "Independent Trade Cities of Housmand" and acquire a katana from the Sacred Blacksmith, Luke Ainsworth. Story- Alright, alright, Cecily's breasts are large. I get it. Really, I do. Could you please stop reminding me, writers? No? Oh, you have to joke about it every other episode? That's okay, I understand completely. The Sacred Blacksmith's plot is deeply flawed and squanders what little potential the series may have had. In a series of this length (12 episodes), time is the enemy. It simply isn't possible to provide character development for a large cast, all while introducing the setting and building up towards the climax. This show's writers evidently don't understand that and chose to spend four episodes on a character (Charlotte E. Frobisher) that is otherwise irrelevant to the story. This waste of valuable time does a lot to kill the story. Initially, the series piqued my interest with references to a "Valvanill War" forty years in the past. The concept of soldiers becoming demons to fight, the mysterious mountain in the background, and vaguely religious references were intriguing. Unfortunately, most of this is never explained further. Instead we have a series focusing on the pathetic main characters and their relationships. Cecily's feeble attempts to make Luke forge a sword, feebler attempts to fight, and pitiful crush on the blacksmith prove (surprise!) not to make for riveting entertainment. The ending is incredibly sudden, but at least it provides something resembling a climax. There is a great deal of talk about protecting the city, friends, etc. The villain vows his revenge and disappears. There are some attempts to provide twists in the plot, but these had little effect on me. I also didn't quite understand the explanation of Valvanille, leaving me to wonder why he was mentioned so much and yet had so minimal a role. Animation- Animation is definitely this show's strong point. Colors are strong, characters are relatively distinguishable, and the fights are mostly fluid. The monsters and attacks demonstrate little in the way of creativity. You have your fire creature, water demons, evil birds, so on and so forth. On a side note, I have a problem with Cecily's character design. Her armor--which serves only to emphasize her large rack--robs her of any credibility (in my opinion) as a main character. Was someone horny when they made this? Sound- The opening is a standard JPop theme with good animation. The ending is one of those high-pitched kawaii type songs, but to me it merely comes off as disturbing. Even the pronunciation of the Japanese seems a tad distorted. As for voice actors, I watched the English version. They were pretty good around the table, but even the best VA's cannot overcome poorly written lines. Characters- Cecily Cambell, the main character, is cowardly, clichéd, and boring. Great, huh? Aria (she dresses in green) has a more interesting past but the same "I want to protect others" personality. There are some attempts to provide conflict as she searches for the reason for her existence, but of course they are poorly executed. Luke is a helpless fool. Lisa, the little girl, is eternally happy and quite annoying. By far my favorite character in the series was the crazy old veteran, Jack Strader. His cries of "Where is my salvation?!" were quite charming. Unfortunately, Jack doesn't last too long in the series. It is regrettable that he wasn't the main character instead of Cecily. The villains have essentially zero character development and no redeeming qualities. Overall (4/10, somewhat poor)- The first few episodes show promise, but overall The Sacred Blacksmith is subpar. Watch it only if there is nothing better.

I really loved this, and baring in my mind... when I watched this… I never knew that the anime was cut… therefore the ending wasn’t the main ending...  The storyline was amazing... but because the anime was axed, the ending was the best it could be.  The animation and sound were terrific and fantastic and the English dubbed voices were amazing.  The characters were amazing, I loved how each one had some flaws and yet some strengths... even the bad guys!  Overall I loved this anime and I was sad to hear it was axed. 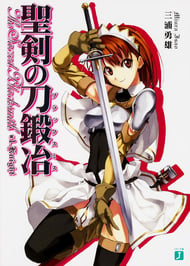 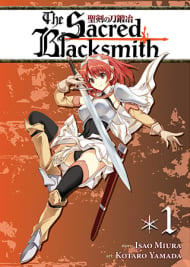