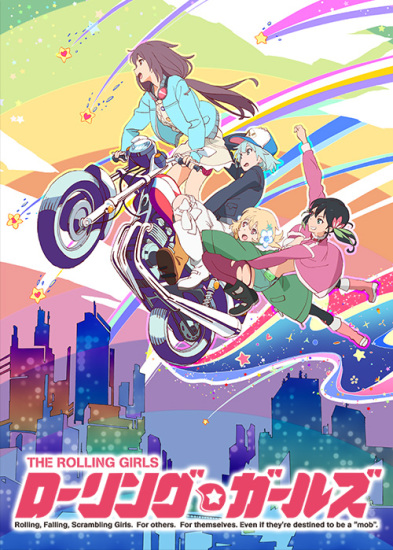 This anime was one I wasnt sure off at the start but after watching the first episode with over the top action and some comedy mixed in I fell in love with this anime and its become one of my favourite of the season. The downside side is towards the end I got lost at what was happening but since the anime has great characters introduced all the way though I can forgive that. I highly reccomend this anime to people who just want a fun anime that isnt serious and will bring a few tears at the end.

What I Liked: The very colourful visuals, coupled with the dreamy watercolour-esque backgrounds. The first two episodes were incredibly strong as an opening to the series. The character designs were appropriately youthful. The fact that the series is seperated into arcs made the series feel fresh when it could've become stale fast. Good character development between the main quartet. The storyline that unfolds involving Yukina and the Tokorozawa leader. The soundtrack, which consists of punk-pop covers by the main quartet. Dynamic and fluid character animation. Good pacing throughout.

What I Didn't: The fact that the series is seperated into arcs may deter some viewers, as it focuses on the (decoy) main quartet. World building still felt incomplete, and was primarily given through the first two episodes. Character animation is sometimes off-model, espeically in close-ups of faces on abnormal angles. Not much plot going on due to it being a slice-of-life supernatural comedy. The Aichi and Mie arc was the weakest of the arcs.

Final Verdict: With a rocking soundtrack and quite amazingly kinetic visuals, The Rolling Girls has an abundance of charm and energy to it. Sure, the surrealist coming-of-age underdog story it tells after the first arc might not be for everyone, but you can't deny that it's colourful, lighthearted and above all a fun (but flawed) little anime.

The begining was great with Macha Green and her rival, but when the showed became about her sister, I dropped interest. I finsished to see if it would make a turn, which it did at the end. The whole purpose of the story was unclear and made it hard to follow. I don't want to spoil anything, but I was under impressed. It would be like watching Kill la Kill or Gurren Laggan, then swithcing over to watch K-on.

This anime is pretty terrible. It takes a lot for me to give any anime a bad review, but this one pulled it off.

the first two episodes were pretty good, if only the show continued like that, it would be a great anime.

The story was really all over the place, making it very difficult to follow. The main character are essentially side characters as they take a background role in most arcs.

There are some "WTF" moments as the show continues to disappoint. The comedy in it isn't funny at all.

Every bad aspect keeps adding to my dislike of the show. There are very few good aspects like the OP. The motorcycles are well designed and neat, but are never any main focus, they are just kinda there.

I don't know if I should add the word spoilers to this or not, but another thing that bothers me was the fact that they are supposedly stones that give you superpowers yet every time they find or earn one, they either give it away or refuse it. Yea in a show where there are so many cool abilities, I'd really like to follow the normies around and not actually do anything.

I like to think that my opinion isn't biased, I like all genres and most shows, but I couldn't wait for it to be over (still not as bad as wanna be the strongest in the world)

The premise of this show is decent, detailing a splintered Japan with factions that are divided not only geographically, but also culturally, but it's largely forgettable after a while. Maybe someone more well-versed in Japanese geopgraphy and culture would find more enjoyment from this.

It's very episodic, with a "realm-of-the-week" flavour, though there is a larger plot that slowly reveals itself. I did not find it to be very interesting, and its pathos did not evoke much empathy in me. It's competent, but not much else. Maybe if I hadn't already seen a lot of anime already...

The animation is good, and there are some cool effects. The colours are nice, and the backgrounds are detailed, with a handpainted feel. The battle animations are great, with the rest being above average.

The characters are not very well developed, with the main cast falling into a cute girl subtype. I had a hard time telling them apart. The supporting cast was more distinct, but few characters were memorable. The racing old man and the peach farmer are the only two that I can recall from the top of my head.

The OST is funky, and the OP and ED are fitting, if a bit cutesy. I liked the VA's efforts, but nothing felt truly stand-out. They do their job and they bring the characters to life, but I won't remember any cool line deliveries from this.

All in all, it could have been better. As it is, it's just another cute girls anime for the most part. Which is fine, but some of us yearn for more.

Reviewed as part of Secret Santa 2017