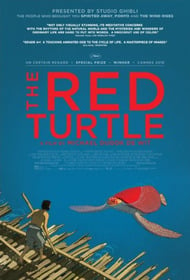 The dialogue-free picture centers on a man shipwrecked on a tropical island inhabited by turtles, crabs and birds. When he builds a wooden raft, he is confronted by the titular turtle. The story then follows the milestones in his life on the island which include meeting a woman and starting a family.

"This is a  fantasy drama film co-written and directed by Dutch animator Michaël Dudok de Wit and produced by Toshio Suzuki from Japan. The film is a co-production between Wild Bunch and Studio Ghibli, and tells the story of a man who becomes shipwrecked on a deserted island and meets a giant red female turtle." -Wikipedia The film has no dialogue, but that is not to say it is silent, as there are plenty of sounds from nature, music, and voices without words. This is pure visual storytelling that manages to blur the line between reality & fantasy in the most artistic way. There is a lot of symbolism, you can't be sure if what happens is an illusion or reality, as the events can be interpreted from different points of view, bringing you to different conclusions depending on what you choose to focus. There is no absolute answer. The closest thing I can think of is The Life of Pi, which shares the sea and a shipwreck as their common elements. Although the story has slow pacing, there is never a dull moment in the film. The silence makes your mind wander in the themes it presents: What do we really need in order to have a happy fulfilled life? The cycle of life, the place of humans in nature, the need for civilization and social interaction, etc. The art style is completely different from other Ghibli works, it's more realistic in the forms and shapes of the characters & backgrounds, but has kind of a watercolor texture, it feels like you are looking at the story moving in a painting. This is a film that I would recommend to everyone to give it a try, although it is probably not for kids due to the lack of comedy and I doubt they'll understand the story, but who knows? With no dialog at all, it also breaks apart all language barriers.

This film is what you point to when you want an example of how to tell a story without the need for dialogue. It is also the directorial debut of Michaël Dudok de Wit with Studio Ghibli and the European Studio Wild Bunch behind him. A fantastic way to make one's debut into feature films, that is for sure. Story and Characters The story revolves around a man without a name that we know of. He finds himself stranded on a strange island, giving vibes of the film Castaway (although it quickly stops feeling like that film). Eventually he finds a red turtle and this is where the film takes a turn for the strange.  Despite knowing almost nothing about him as the film goes on I was empathetic to his plight and wanted him to at least survive his ordeal if he could not find a way off the island. As the film progresses I was more and more endeared to the characters. I cannot say more as it would give away too much. It was paced very well, it didn’t feel like it was dragging at any point, and it also didn’t rush through scenes. The Technical Stuff On the technical level this film is great. The use of sound is extremely important with there is no dialogue, other than some grunts here and there, and they did a fine job. They were able to convey emotion effortlessly through the use of animation. Speaking of animation, this film is wonderfully animated, everything flows so well. It has to be one of the best looking films I had seen from 2016. Conclusion If it isn't apparent already, this film is a must watch especially for those that love to see great animation, with a strong story to boot.  A SpanglishJC 'Short Review' Daily Anime Marathon Club #5 Review