The Qwaser of Stigmata: Portrait of the Empress - Reviews 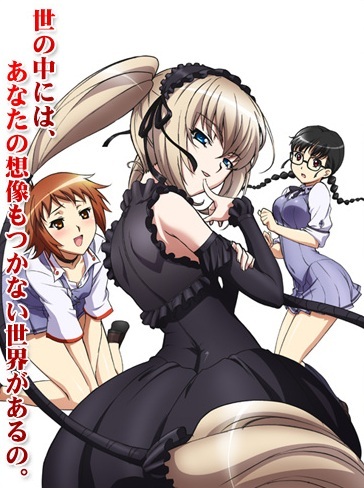 Story: The fuck? Story? Fuck that shit. Did you see the original series up to episode 10? This is 10.5 and has absolutely no relation to the bullshit story of the original series whatsoever. None. The plot is basically a rapis- "Breast Detoxifing" Organisation run by a rapis- rapist who sucks the soma out of women with large racks to become a Qwasar. But before that, Measurement day- I mean physicals.

Yes. Detoxify breasts through machines or lips on action. This shit is dumber than the normal shit but points for it being a supposedly legit organization on the news before the crackdown and for being 10,000 milk research... thing. Think it means 10,000 bitches.

The fuck is this shit?

Animation: Them titties. Fucking ten right off the bat for them titties and graded for them titties alone. From A-Cup to G-Cup to WTF-Cup, it has them all and bares the nipples. From older women a la school nurses with abnormally huge racks and hot moms getting fondled by older men and sucked upon to flat-chested class presidents (Sans nipples) who is... old enough... Probably. Questionable, but what isn't is the loli nipples, which is... awkward, to say in the least. Not even the original titty series had loli nipples.

Seriously, what the fuck?

But that aside, there's the jiggling. More bounce to the ounce! It has everything! Them bouncing and the physics of them bitches bouncing and shit, fucking awesome. You'll forget everything else for them titties. Not that there is anything else mind you, you aren't watching this for anything BUT titties.

Sound: I could leave the OP but I love and adore the EP, which sounds great and has images where the only relation is bitches, tubs and water. No jokes, the images makes as much sense as how Tomoe and School Nurse can stand upright.

Characters: I'll admit that the original series didn't have much on characters. On one side there are the rapis- sexual offenders (Also called Qwasars), and the other side, there are the women who were sexually attacked, molested, exploited, deflowered by their titty milk and bitches getting their essence extracted. And Phoenix.

Here, it's a complete turnabout from the character's normal habits, for some of them at least. Which means things are fucked up as per the norm, as like everything else in this shitty OVA and most of the mains play little to no part in this titfest.

Overall: You catch that spinning tub in the EP? Fucking sick. You're watching this because A: You're in the Buddy Group for Sexy no Qwasar, B: You're a perverted individual and watched the series, wanting more titty action before Seikon no Qwaser 2: The Tittening or C: You're a complete pervert, you sicko.

Basically it's shit, but you don't care. You're just here for the boobs.