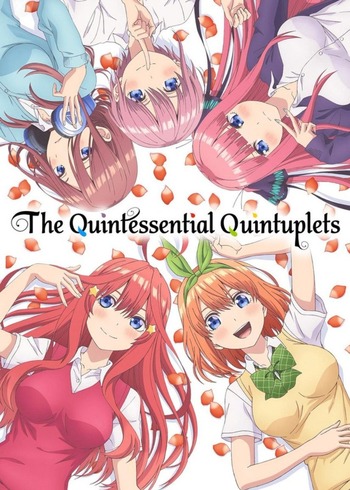 A Mountain of Problems

What's Been Built Up

The Photo That Started It All

Anime-Planet users recommend these anime for fans of The Quintessential Quintuplets. All available to watch right here, right now!

In Japan, the lonely have a new way out — online services that rent out dads, children, even girlfriends! When Kazuya's true love dumps him, he's just desperate enough to try it, and he's shocked at how cute and sweet his rental girlfriend turns out to be. But she wants to keep their "relationship" a secret, and there's a complication... she...

The "Royal Tutor" is a special tutor carefully selected for the task of teaching the prince, and a title given only to the best teacher in the nation. Heine Wittgenstein has been called to the kingdom of Grannzreich to take on the role of the Royal Tutor. He's been ordered to raise a worthy candidate for the throne, but he's greeted with four...

Both Stories have the same concept basically. A brainiac tutor assigned to school 5 HOT siblings (all the same gender, but both anime have a different gender from the other).In both cases the majority of the siblings are against being tutored, and the tutor is left trying to both sell themselves as worthy to be teaching, and to find interest in each sibling to slowly coax them into to being on board with the studies 1 by 1.

Royal Tutor and Quintuplets share some basic fundamentals. Both features characters who are or look the same age or younger as those he teaches. Both deal with a family of troublesome failing students.  Both mentors operate using unconventionally unique techniques for tutoring.  Both characters gradually get the protégés to understand p, respect, and eventually at least try to listen and learn from them.  Both leads go through tough challenges to gain their students’ trust and acceptance.  Both stories are comedy drama geared around life and education.

Both shows follow a tutor and his unruly students through a series of comedic events and circumstances as they learn not only about school, but about life as well.

The Royal Tutor does not include a romance aspect, while The Quintessential Quintuplets does have a very well-done harem aspect to it. In both shows, all characters receive equal or near-equal amounts of development, with the exception of the tutor himself, as both shows tend to follow him and show things from his perspective.

Naoya is a first-year high school student. After he confesses to Saki — the girl he's liked for a long time — they decide to start dating, Naoya's life is full of bliss. However, one day a beautiful young woman named Nagisa also confesses to Naoya. Naoya and Nagisa immediately get along, and he tells Nagisa that he already has a girlfriend. She...

Both shows have a guy, who is interested in many girls. The stories are very different though, since in Kanojo mo Kanojo the guy gets a bunch of girlfriends but in 5-toubun he is only interested in finding "the one" from the girls. Nevertheless, the girl characters' personalities match.

Both shows have a guy, who is interested in many girls. The stories are very different though, since in Kanojo mo Kanojo the guy gets a bunch of girlfriends but in 5-toubun he is only interested in finding "the one" from the girls. Nevertheless, the girl characters' personalities match.

Both are harem anime that have romance, comedy, and so much more. If you like Girlfriend, Girlfriend, you will like The Quintessential Quintuplets. (Same thing the other way around)