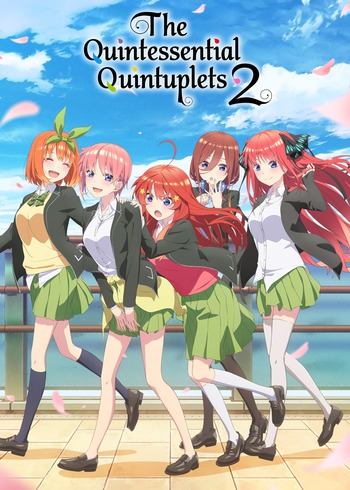 somehow this anime was better than the first one. The problem with the show is the same problem with the first one. The problem is that there is only 12 episodes. story is a 8 becuase the story in my opinon is better then the last gotobun no hanyome. Animation is a 9 becuase the animaton is amazing even better then the first gotobun no hanyome. sound is a 8 its just as good as the first anime. Characters is a 9 becuase every single character has deep feelings and a lot of backstory. not everyone of the Characters has deep feelings and backstory but the ones in the spotlight is amazing character development wise. Overall this anime is a 8.5 in my opinon. i would recommend to watch this anime if you like harem anime and if you like short animes. btw gonna watch the entire season three:).

This was a great romcom pseudo harem anime.  There are many ways one could do a harem the right way and in the best kind of ways, and this was one of them.  From the start, season two frankly had one of the best first episodes of a season two of all time.  The season very cleverly picked up where the biggest question mark from season one lingered besides the obvious end series mystery, which was the flashback of "Rena" as the mystery girl is later identified as,which happens to be the same name as a relative who passed away. It was exemplary use of foreshadowing and tying relative but loose links of varying degrees central to the plot.  The season closed with a very strong declaration of who Futaro chooses, which makes me wonder why there's a hint for a season three?  If the end question keeps getting yanked around like that, it may very well destroy the carefully laid foundations of the entire story.  Viewers won't like being jerked around after a question was so profoundly answered even if somewhat vague since it was said flat out, but all the hints clearly pointed to a forgone conclusion.  If it stays as it essentially all but flat out said, then it's a great story, if not, the the creators just enjoy playing twisted mind games.  Still, even here, we are constantly shown what if scenarios with all sisters.  Even the winner, though cemented is left with a slightly vague subtlety perhaps to create a continued illusion of uncertainty.  Yet the closing events honestly leave no real doubt.  The only doubt is if we will get shoved a fake jumping the shark plot twist scenario merely to drag on a subtled finality.  I hope they don't because that would probably pretty much ruin the magic of the entire series presented so far.  Then again, the way the closing appeared might also be a third season teaser that will actually play out the same but maybe done as insurance in case a season three fails to materialize as often happens in the fickleness that is the world of anime production.

We get plenty of flashbacks and a few subtle cues.  Several mysteries are actually revealed.  The history of the crossing paths is essentially told in full through several flashback sequences.  The sisters solidify a degree of maturity while traversing self doubts, jealousy, and conflicts.  We learn a unique coincidentally similar circumstances between the sisters and Futaro about their family history having curious parallels.  It's also ironic that the past Futaro was much worse than any and perhaps even all the sisters combined at their worst which is maybe the ultimate irony.

Overall, this is one of the best second seasons I've seen in anime and good enough that it might possibly surpass the first season.  In scoring, I felt it fell short of perfect character rating because, the constant jumping, uncertainty, and stand in swap disguises was just a bit overdone and carried on a bit longer and more than necessary or fitting to the progression of the story.  Sound while having no flaws, didn't go that extra mile to have the subtle background noises perfectly added in and music was a bit lacking compared to other anime and I think even the first season.  Most everything else was at or near enough to perfection that such fractional scoring wouldn't be justified even if it wasn't quite perfect.

This season is AMAZING, i already loved season 1 but the season 2 is AMAZING i just recommend it to anyone that is looking if the anime is good and didnt watch it yet just go watch it now!

hm where to start? first of all i don't watch anime anymore and haven't for about a year but i sometims do now and then. i've also read the manga a while back and im impressed by some of the scenes they kept from the manga. if you haven't read if i recommend reading it, its probably better than both season 1 and 2. i am not an expert, im just writing this because the other reviews are kinda bad with very high scores, apart from the last one but i feel like the scores is a bit too low.

Story: the first season was about fuutarou becoming the quintuplets tutor and getting them to pass the exams with a bunch of other events happening in between. this season isn't much different honestly but they do follow the manga a lot more than other animes, i think. someone else said that they cut some parts out but thats what anime directors or whoever does. im not sure why but i don't think its making it any better. if i remember correctly the swing scene was supposed to have youtsuba say she wanted to be a bride or something but they cut that out and edited it a bit, i think. i don't really remember when the scene took place in the manga and they might of added that swing scene and i forgot about it in the manga.

the animation and art style is just as good as the prequel but they changed their eyes a bit. fuutarou has gold - yellow eyes instead of his blue eyes and the quintuplets have more detailed eyes and some scenes detail their eyes a lot. the art style hasn't changed much but it is a bit better than the previous season. and the part where they all fall in the river/water scene is almost as good as the one in the manga which was one of my favourite scenes, i think.

i think the sound part is for music but part of me feels like is sound design, so ill put doth of them. in my option, the music is definitly worse than the first. its not bad but not great either. i like the part where they put season 1s opening at the ending of season 2, but thats all i can think of. i don't have much for the sound design but i think its good. like the sound effects and expressions.

when i first watched the first season i didn't like most of the characters too much and i still feel the same. but now i don't really like all the characters equally, maybe. some the characters have developed a lot from season 1, especially nino who might be my favourite as of now. just kidding i don't watch anime. but the others have stayed pretty much the same. does anyone actually like itchika? i don't hate her but i don't like her and not exacally neutral either. maybe its because shes a snake and i don't like liars but thats a personal thing. itsuki and youtsuba haven't changed much from season 1 but i think thast because they don't have plans for one of them. miku hasn't changed much as well but she is more open about fuutarou.

its not a bad anime but its not the best. it did have those cheesy cringe moment but that will always be in anime if they're adapting from a manga. or maybe not and its only happening more recently but i wouldn't know. i did somewhat enjoy watching this anime or season. for every anime i've watched i've lowered their rating a bit because i don't like them being too big and there is no and will never be a perfetc, 5 star anime. i don't think people read reviews for a sequel and with a high star rating but im just writing about my opinion about it, as i should.