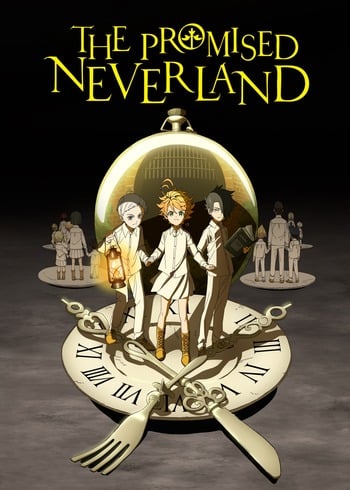 While preparations are underyway, Emma, Norman, and Ray are now "training" the other kids so they can get stronger and be ready when the time comes. But despite Mom's orders, the new Sister Krone has her own plan…

Anime-Planet users recommend these anime for fans of The Promised Neverland. All available to watch right here, right now!

Definetely a similar psychological horror vibe as well raising children under hellish circumstances. If you like one, you'll probably enjoy the other.

There are a lot of parallels between these two animes, where kids are living in a dystopian world trying to survive. They both have great world building and exploration too. I thoroughly enjoy both of them!

They both have a parasidical world built on a hidden foundation that, if revealed, threatens to ruin the paradise.

Those two animes have a totally different storyline, although it is interesting to see their common points. They both tell stories about kids and how they have to escape from a difficult and set up situation.

The more I think about it the more similarities I find between these two series. Both have dark and interesting themes. I really enjoyed both of them and I find it strange that there's no recommendation so far. I would point out more similarities, but I really want to avoid spoilers.

Both series feature a plot that is filled with despair. They both have young people going through their own forms of sadness after their life was change and subverted in a dark way unaware to them. Both do see similar endings in terms of good/bad but the emotional strings this anime pulls on are very similar and feature supernatural like elements