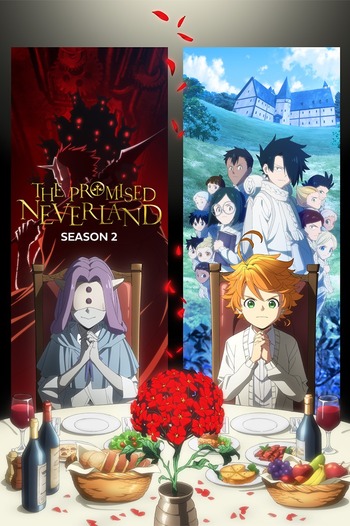 UPDATE AFTER THE LAST EPISODE OF THIS SEASON:
Forget it, go read the damn manga, forget this adaptation ever existed, plain bullshit and I had some hopes.
LAST UPDATE JUST BECAUSE:
Bring Yuugo back.

Yakusoku no Neverland second season has become a very controlversial subject, with the majority of people downvoting it because of the lack of important information, characters and the change of the plot.

Emma, Ray and the rest of the kids have finally escaped Grace Field and are ready to write down history by building up their future step by step, they are as determined as ever. With the help of Norman's pen, they explore the outside world with the aim of finding William Minerva, their last hope for the future they so desire. However, after meeting Mujika and Sonju, two new kinds of demons, different from the ones they had witnessed before, they figure out how much more there is to learn about the world and its function. Learning the truth about the world split in two and the promise made 1000 years ago that managed to balance the demon and human nature, their hopes rise up, and they are ready to change the world for the sake of their freedom.

Firstly, I wanna mention that I am, indeed, a manga reader and I'm disappointed in this season. The story hasn't changed as much, but it feels like it because of the missing chapters. In fact, they have skipped over 60 chapters, important arcs and never introduced characters that were supposed to appear at some point, leaving us manga readers hopeless about them even making it in the show even later on. Although it has been said that the Anime will not be following the manga, it feels as if they are trying to follow it as much as possible while messing the whole thing up and removing different things from the original plot, example: Episode 6. I'm not going to analyze every episode in this review, though. They have skipped stuff, yes. They have removed stuff, yes. They have changed a lot, yes. And it even feels as if the emotions of each character stopped seeming strong and indicating the work and effort that has been put. To conclude, so far, the story is plain simple while it could have been SO MUCH MORE with whatever else the manga has to offer. I am disappointed, but of course it isn't the worst of this season and definitely not a terrible sequel. Since Episode 6 seemed to be one of the best and not as crap as Ep 5 or 4, the season has potential to become better, but of course not the point where we wished for, that is almost impossible considering the way it's going now, sadly.

DETAILED INFO ABOUT WHAT EXACTLY WAS REMOVED:

"tHeY DiD aN oKaY jOb aT aDapTinG iT iN sHOrT" No. There's a difference between removing everything manga-related thus changing the whole story and removing the most important parts (that developed characters as well as the story) thus leaving what's left to adapt, resulting in a horrible unlogical pacing. In this case, they did the second and that's not okay. If you're gonna remove these stuff, then just change the whole story.

Never talked about YnN's cast before, but one of its weak points is that it doesn't have many memorable characters no matter how big the number is. Although you have been introduced to so many kids, few of them make it to the memorable list. However, if I am to talk about the ones that do make it, there are a lot to say but I won't get into much detail yet. The trio of Emma, Ray and Norman has always been one of my personal favorites, all three of them having strong personalities that you can love for the reason that they differ so much. Emma is the hope and happiness of the group, dedicated to achieving her own future with her family. She's determined, smart, brave, as well as highly optimistic, but also very naive at times. Sure, her hyper kind of personality and her excessive positivity may annoy some fans, however, without her high spirits, the rest of the cast wouldn't have made it this far. Ray is the analyst and stragedist of the trio, always ready to analyze his points about different topics and situations, as well as studying every possible option at times under pressure. He's usually the one to prove which options are right and which are wrong, as well as stating the difficulties of each one of them. However, his weak point is how he cannot go further than his calculations, such as trying to make the impossible possible. Norman, lastly, is the biggest genius out of the three. He's usually the one to first think of a solution or solve a case, as well as discover the most about something. He's the smartest, however, he's as kind, caring and loving as a friend. Each of them miss something the others have, or have unique traits for themselves, making the trio incredibly enjoyable to watch.
Isabella is my personal favorite character of the show, however, making her way up to my top villain list. She's cunning, intelligent, manipulative, secretive, and always one step ahead of the ones in her way. She does not lose her cool and remains calm, which makes her even scarier and totally unpredictable. Reading the manga will make you explore her depth as a character much better. She's more tragic than shown in the Anime adaptation and there's more to her story and her feelings.
There are many more characters I would love to write about, but they are from the Manga and, unfortunately, haven't been introduced to the Anime, so I'll let that slide..

I never had a complaint about the sound and the animation of YnN. Cloverworks had satisfied me enough with the budget of the first season, especially the soundtracks, as the Anime itself never really focused on animating scenes greatly, action ain't its strongest point. For an Anime that is not willing to focus on the look of the animation, it is pretty decent I would say, no problems here (I am aware of the CGI of the demon in s2 and that it ain't the best looking CGI, but it wasn't that bad for me to talk about it more). The sound, on the other hand, is for me one of YnN's strongest aspects, with incredibly beautiful OST's to listen to and relax at one moment, and get the total chills the next. It's pretty damn cool to listen to the Anime's music, to be honest, and even s2 keeps up with them (Episode 6), so no complaints here either.

No, it ain't the best sequel, and no, it definitely didn't live up to our expectations and the hype it was receiving before its release, which is disappointing or rather upsetting, especially for manga readers. However, is it a terrible sequel? No, not at all, far from that. As a manga reader myself, I can say that Anime onlys don't feel as bad as we readers do, apart from the feeling of the awkward pace applied in this season. It is not horrible at all for the Anime onlys apart from the weird pace, and I do think they will be able to handle it. Us, though? Not sure. I personally don't feel as bad as I thought I would feel, especially after I watched Episode 6 (10x better than Episode 5 & 4). Of course I wished they had followed everything in the manga, even if it would take them more episodes or more seasons, because as far as I am concerned, the manga is one of my favorites and I consider it amazing, so it is indeed upsetting. But I'll put up with this weird adaptation for the sake of my enjoyment, as YnN still remains in my favorites, either Anime or Manga. I haven't lost all of my hopes yet, fingers crossed we get something better out of it. Decent sequel so far, but yes, it could have been way better.

Update: ANYTHING THAT SAYS "it's not that bad" IN THIS REVIEW IS FALSE. IT IS INDEED A TERRIBLE SEQUEL!

RECOMMENDATION: Read the manga and start from Chapter 38 if you don't want to read whatever happened in s1.

My scores can be seen below!

I am so disappointed, season 1 was a masterpiece. This season is horrible. All of the characters have been ruined, they don't think, they miss solutions to things that they would have seen last season and they are just overall dumber. There was one scene where there was a timeskip and i didn't even notice. In episode 6 they bring back Norman and he just has a huge exposition dump and reveals that some humans have super powers and that he can instakill of the demons and will do it tomorrow. He just talks for nearly the whole episode. I haven't read the manga but I am told they skipped a whole arc so if you enjoyed season 1 read the manga i guess.

Literally, why would you change the plot of an amazing manga?

Please, just go read the manga if you haven't yet.

The second season of a great anime adaption went especially downhill when they decided to remove some of the best characters as well as the greatest arc in the manga. I personally found that they changed the personalities of a few characters, including Emma. This is mostly during that part of the season where they're struggling to find food. This is not the same Emma as the Emma in the manga.

The animation, sound and any part in the hands of Cloverworks was done well. The decision to change the plot is not their fault and as an animation studio, they definitely carried this season.

The changed it so much from the manga for no reason, skipped over and entire arc, and cut out 2 characters . That's just stupid. The manga is great so if you haven't read it I suggest you do, because this season does not properly depict what was meant to happen. I loved the first season, but this season really let me down. Other that all th issues I mentioned, this season could have been good if the people making it didn't try to rush it.