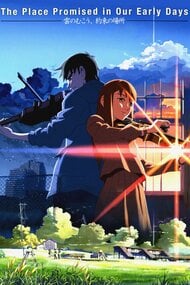 StoryIt's really hard to talk about Beyond the Clouds without spoiling (for the record, I feel NFO and AniDB both spoil in their descriptions... as they both use the same description), so I'll stick to what happens in the beginning. What's implied, but not really discussed in detail, is that Japan underwent a split after they lost the war, and Hokkaido became the land of Ezo. A great tower was also built but its purpose was unknown until decades later. In the present, however, three friends enjoy a summer together. Two of them, Hiroki and Takuya, have constructed a plane over the years that they plan to fly eventually, to see the tower and the island of Ezo. Sayuri and the two make a promise that they’ll someday fly to the tower on the plane, but then, Sayuri mysteriously disappears, and life goes on for the two boys. That’s about half of the movie, with the other half being a few years later. Without spoiling, I’ll just say that the movie goes into some pretty scientific stuff and explores physics and other advanced topics. Beyond the Clouds is not for everyone. It’s not only slice of life, but it’s really, really slow slice of life. In addition, the topics covered are very intelligent and scientific, and probably would be best enjoyed if you have a strong science background. Granted, I didn’t find this to be a bad thing. I enjoy slice of life series, slower series, and things that are intelligent, though I do admit it was a bit much even for me. Still, the story was superb, the execution was good, and the flow was decent, so I still gave it an 8. As far as genre or mood? Well, it’s definitely slice of life as I mentioned above. Furthermore, there’s a subtle but very moving romance that occurs, which will definitely remind you of Hoshi no Koe. There is essentially no comedy, no action, and very little that happens between characters except talking, but it’s a great quiet ride nonetheless. So for the story? Good, but definitely not for everyone. AnimationIf you saw Hoshi no Koe, you surely were awed by how beautiful it was. Expect no less from Beyond the Clouds (created by the same person), and be assured you’ll be in for an even more beautiful treat this time around. Everything about BTC’s animation was stunning, from the beautiful panning background shots, to the close-ups, to the odd camera angles and character designs. Attention to detail was superb, lighting was amazing, and colors were rich and vibrant. Though this section is short, I really can’t say much else about the animation because it’s virtually flawless. The only reason I knocked down half a point is because the plane scenes did look a bit fake compared to the rest. Great animation all the way around. SoundMusic was orchestral and incredibly moving, or non existent. Due to this being very slice of life, it’s ok that music was devoid a lot of the time, and the music the rest of the time made up for it. Not much else to say about the soundtrack, since it was superb in most ways. Voice acting-wise, they all did a good job. CharactersThe only low point of the movie would be the characters, but not by much. Because this was a slice of life film that was very quiet and moody (and focused on the visuals), the characters suffered a bit. They weren’t developed basically at all, and we only knew about the thoughts and feelings of one of the male characters. The romance between two of the characters was definitely the strongest point of the character interactions, but nothing else hit me very hard. This is a movie you watch for the intelligent plot and (more so) the visuals, anyways. I would have liked to know a little more about the characters, though in the context of slice of life, maybe it wasn’t terribly necessary. OverallBeyond the Clouds definitely reached my expectations as something amazing. I guess I just wish it would have been a bit shorter or had better pacing, so I wouldn’t have been as occasionally bored. The transitions also really should have been fixed. In between each scene there would be several seconds of pitch black, including after a major buildup complete with booming music. The visuals are fantastic, music is great, and story is interesting, so what can you lose by watching this? As long as you don’t hate slice of life, Beyond the Clouds is great for a viewing.

Story: I would not wish to spoil the plot for anyone looking forwards to this, somewhat hyped movie. It is a very, very slow movie. If you are not a fan of 98 percent actionless movies that deal with day by day activities you will not like this. I must stress that that is not why the score is a 5.5, I am a fan of slow anime in many instances. Where a place promised in our early day loses points can be attributed to many things. First they don't give you a very solid hook, even by standard of slice of life animes, the first portion progresses at a crawl and has an unpropotionally small amount of the development in both plot and characters in the movie, despite the time it takes up. However, the pace and degree of intrigue the story inspires does spike up towards the middle, when the main characters life away from family and friends is fleshed out, and his thoughts on it come to light, though it sort of drifts off at the end into a lackluster ending. The setting is a good one, and distinct factions are set up, though I use the term distinct loosely as the narration does a poor job of saying who's who. This ties in to the political elements of the story, which feel somewhat tacked on, other than the fact that the war has seperated a character from their family. The movie tries hard to be profound and scientific, not as forced as a lot of anime, but certainly not as successful as "good" anime. Little is ultimately explained about the "science" of the movie, and you are often left scratching your head at why certain characters are behaving the way they are. The ending is so vague, though it touches on the theme of coping with the loss of loved ones, and dealing with distance. The themes of seperation and reconnection is the main thing the plot had going for it. I didn't take points off for it, but it's worth it to note there are absolute plot holes/logical inconsistencies as well. For example at one point someone steals something very important from a place that is very heavily gaurded, and their escape simply isn't shown, nor explanation given. Animation: The animation here gets the movie a lot of points. A lot of people probably could not cope with the slow start up the movie offers, without the allure of the animation. Thankfully from the slow to interesting parts the animation remains top knotch, with the exception of the weird plane graphics near the end. If you've seen 5 cm per second your in for more of the same goodness! Sound: The sounds here is good, though aside from some Violin, there's no real soundtrack to write home about. By no means bad or sub par audio in general. Characters: The characters were mostly misses. The points earned here are mainly for the primary character Hiroki, who has some interesting thoughts, and seems to have developed somewhat as the movie progresses. As for the secondary characters they develop minimally. Due to the nature of the story, the female character does not develop at all, and the other male lead certainly grows, but no legitimate development could really be said to have taken place. Most slow paced stories thrive off their characters, but there wasn't much to thrive off of here. Overall: Unfortunately a cool setting, great art, and interesting concepts are mostly squandered in this movie. I wanted to love it, the name itself is awesome, and I had no idea what to expect. But at the end of the day it is a very "meh" slice of life anime, that wanted to be more than it was. My recommendation only goes out to those who REALLY are looking for a relaxed slow pace slice of life anime that delves into dreams and "science" to beautiful animation with a theme of loneliness. 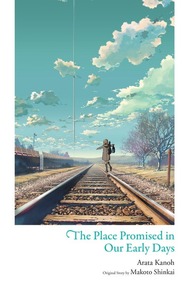 The Place Promised in Our Early Days (Novel) 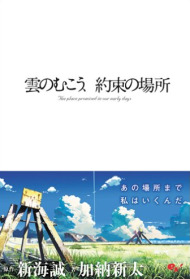