The Pet Girl of Sakurasou - Recommendations 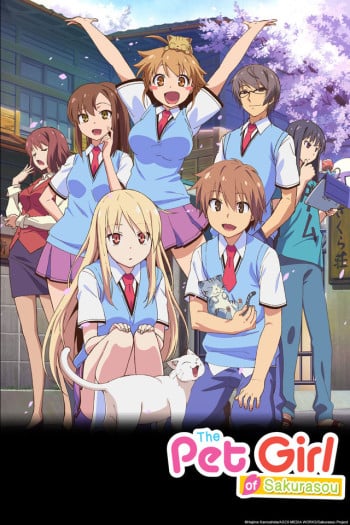 If you're looking for manga similar to The Pet Girl of Sakurasou, you might like these titles.

Ageha is a high school student who has taken over the role of housewife ever since his mother passed away. He has two younger brothers whom he must care for, and a useless father who is always out dating women. There's a girl that Ageha likes--his classmate, Nina. She tells Ageha that she's in love with a handsome, popular singer. Ageha decides to sing on stage at an open mic session to prove to Shinna that he can be like that guy, too. But just after he starts to sing, someone interrupts and abducts him! The stranger is no other than Miyamoto Range, the singer whom Nina loves. Range wants Ageha to join the Shibutani Alliance Cub—his band—and is relentless in his pursuit. At first, Ageha thinks that Range is annoying. But little by little Ageha is won over by his charm. Will he be able to accept Range? Will Nina ever return his feelings?

After breaking into Anzu Shinohara’s apartment and smashing his already broken keyboard, Hina Sakata quickly finds herself in his debt. As she works to pay him back, Hina finds out that Anzu is a vocalist in a band and becomes entranced, wanting to explore more of his unkown world. Will this unlikely couple last longer their fifteen seconds of fame?

Boy-crazy Jae Yoo is willing to go through any underhanded means if it means living in the boarding house full of hot guys… Even if it’s going out on a blind date with the dorkiest boy in the school. When she dumps the guy immediately after, she pisses off his handsome best friend Ji Hu and from that point on, the two are constantly going at each other’s throats like cats and dogs. When Jae Yoo finally accomplishes her dream of entering the “boarding house of hunks,” she thinks that nothing could go wrong. An amazing house, a kind landlady, and even a cute guy who seems to be interested in her… What’s this?! Ji Hu is the landlady’s son?! And how is it that he knows about Jae Yoo’s most embarrassing moment in life?

She is someone with the nickname “Seatmate Killer”, and also one of the prettiest girls in the school. Every male student that became her seatmate has confessed to her, and all of them got rejected brutally. The one who became her new seatmate, the seat located the furthest away from the front and beside one of the windows, thus being a godly seat that will make every male student jealous, is Narito Yuuki. He is someone that generally you won’t notice at all. The entire class thought that he will fall for her in a short time, but that may not be the case…

Sakura Aki is a penniless high schooler who likes to cook and does other "unmanly" things. His grandfather and father are disciplinary on gender roles and beat up Aki everytime he does a thing that women would usually do, like cleaning. When his father leaves him absolutely broke, and with his grandfather realizing Aki's "unmanly" flaws, he sends him to live at one of the dorms at an all girls' school that he runs, a school where distinguished young ladies of the country attend, the Hanayashiki - Flower Estate-, to teach him a lesson. He meets Kitahiro Renge, a girl with un-ladylike manners and a meat loving obsession. An encounter that's going to save Aki Sakura or just another problem in sight?!

Set at the same boarding school as Himitsu no Kaidan, but focusing on a different cast of characters altogether.

Natsume, who is living in a boarding house, goes to the same school as the daughter of the house, Kayo. Though they're friends, they have no romantic feelings, especially since Natsume is a total player and Kayo doesn't understand his attraction for the other girls. But there's a reason he acts like such a playboy; his parents' marriage isn't good, and he doesn't believe anyone would love him for more than a casual encounter.